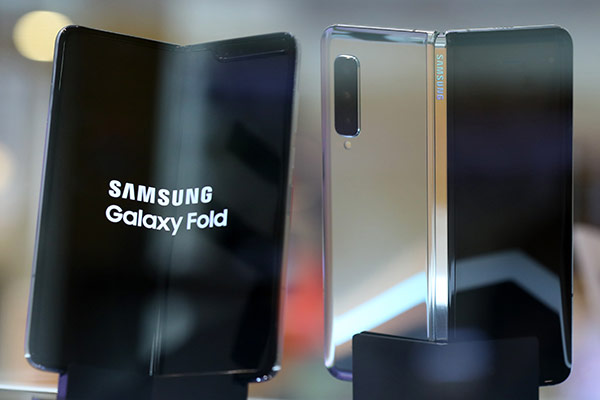 Foldable smartphones have opened a new era of mobile devices. Samsung Electronics’ much-hyped Galaxy Fold smartphone has sold out since its release here in Korea on September 6th. Today, we’ll discuss the potential change brought on by the foldable smartphone, the first of its kind, with Professor Kim Yeon-hak at Sogang University’s Graduate School of Management of Technology.

The Galaxy Fold drew an enthusiastic market response upon its launch. The first batch of the new phone, at around 5,000 units, sold out in just 12 minutes. Samsung Electronics prepared some 15-thousand units for the second preorder, which also closed in about ten minutes. It seems that early adopters were extremely curious about an entirely new type of phone that they had never seen before.

Indeed, the foldable smartphone marks the beginning of a new era in mobile technology. The first edition of smartphones we currently use was the iPhone released by Apple in 2007, while smartphones were introduced in Korea in 2009. Consumers tend to be fed up with a product that has been in use for ten years, whatever it is, and it is hard to expect further technological development from that product.

At a time when the distribution and growth of smartphones remains in the doldrums, the pioneering bendable phone is expected to revitalize the stagnant smartphone industry.

The price of the Galaxy Fold is as high as nearly 2.4 million won, which is over 2,000 US dollars. Still, many people are showing interest in the world’s first foldable smartphone. Moreover, there are only a limited number of the new handsets available on the market. High demand and little supply results in the shortage of goods, despite the hefty price tag. The Galaxy Fold is already being traded on local online markets for resale at higher prices. Some are even reselling the device on a foreign website at over 4,000 US dollars. Thanks to soaring demand for the foldable phone, people are showing greater interest in the newest gadget.

The foldable mobile device combines smartphone and tablet features. When folded, it is as small as a smartphone. When unfolded, it becomes a tablet with a wider screen where users can perform various tasks simultaneously. The new phone is capable of running three different apps on the screen at once. For example, users can send a text message or listen to music while on the phone at the same time. The foldable phone has various convenient features that are not found in existing smartphones.

A foldable phone refers to a smartphone equipped with a bendable display. When folded in half, the Galaxy Fold has a 4.6-inch screen. When unfolded, it becomes a 7.3-inch display. So users can experience both a smartphone and tablet. Speaking of a TV screen size, it is commonly believed that the larger, the better. This trend is now shown in smartphones as well.

Another notable feature of the Galaxy Fold is that it can run up to seven applications at the same time. For instance, you can watch a video on the left half side of the display, while surfing the Web and chatting online on the right half.

This new smartphone that unfolds to disclose a larger, immersive display for multitasking has become a hot topic in the global IT industry.

While Samsung Electronics was the first to put foldable handsets on the market, some Chinese firms are also planning on releasing their own foldable phones. China’s Huawei exhibited its Mate X phone a few times before, but it has yet to deploy it on a commercial scale probably because of some durability issues. The Chinese tech firm said that it will release its foldable phone next month. For now, the foldable phone market is led by two major players—frontrunner Samsung and runner-up Huawei.

While Huawei plans to launch its Mate X in October, another Chinese company TCL recently disclosed the latest version of its foldable display at IFA 2019, an international consumer electronics fair in Berlin. Apple, meanwhile, could release its foldable smartphone early next year, while Motorola and Xiaomi are also preparing to jump on the bandwagon.

The market is expected to expand, although projections vary as to how fast it will grow. Some predict that 1 million foldable smartphones will be sold in 2019, but many others estimate the market will be at 300-thousand to 400-thousand this year due to the five to six month delay in the release of Samsung’s Galaxy Fold and Huawei’s Mate X. But from next year, the market will likely grow fast, on the back of fifth-generation or 5G networks that will be built around the world. I guess more than 40 million units of foldable smartphones will be distributed around 2023, posting an annual growth rate of more than 100 percent.

More than 400 million smartphones have been sold each year since 2007. But the market is currently in a slump, due to the lack of any promising growth engine.

The global smartphone market saw its first-ever contraction last year, compared to a year earlier, while the market remains pretty much the same this year.

Under these circumstances, the foldable phones are breathing new life into the sluggish smartphone industry. It’s been over ten years since the opening of the smartphone market. With 90 percent of the population in Korea now owning smartphones, the period before changing one’s smartphone has become longer as the device is becoming increasingly efficient and functional. It is little wonder that mobile phone manufacturers are eager to adopt foldable handsets as a replacement for existing smartphones. Some even forecast that foldable phones will absorb demand for notebook computers as well as tablet PCs. Market analysts have advised Korea to focus more on innovation in order to secure a share of the foldable phone market—a blue ocean that has just opened.

To continue to lead the market, it is necessary to develop technology and take an advantageous position in the market before other competitors. As we know, Samsung Electronics has maintained the top spot in the global smartphone market for years. But the gap between Samsung and the number two player Huawei has been reduced considerably. If the situation remained unchanged, Samsung’s status would have been threatened in the already saturated smartphone market. But thanks to its launch of the foldable phone, the Korean tech giant has found a breakthrough. It seems Korea is several months ahead of China in the foldable phone market. If Korean tech companies continue to release various types of innovative foldable handsets through constant technological development and market dominance, they will be able to continue to claim leadership in the world market.

In 2019, the smartphone market has seen a completely new category of mobile technology, with 5G mobile networks commercialized to offer super-fast connectivity and foldable phones reaching out to consumers.

As the leader of this significant change, Korea should keep its status as a “first mover” in the global market, based on its technological prowess and bar-raising innovations.