Hyundai Motor to Set up Self-driving JV with Aptiv 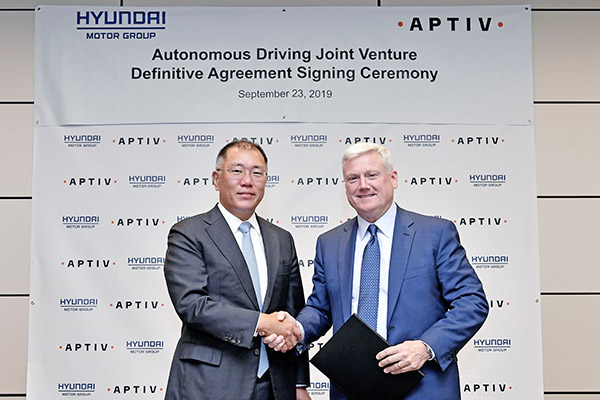 Hyundai Motor Group has decided to invest two billion US dollars to set up an autonomous driving joint venture with Aptiv, a global automotive electrical parts manufacturer, in a preemptive move to dominate the self-driving vehicle market. Here is Professor Kim Pil-soo(김필수) from the Department of Automotive Engineering at Daelim University College to discuss the implications of the joint venture.

Under the agreement, Hyundai Motor and Aptiv will each take a 50 percent ownership stake in the joint venture valued at a total of four billion US dollars. It is true that Hyundai Motor lags behind other global automakers in autonomous driving solutions. The partnership with Aptiv, which is known for its advanced self-driving technologies, will enable Hyundai to accelerate its push in autonomous mobility. In this vein, Hyundai’s decision to form the joint venture is considered a bold, game-changing move.

Hyundai Motor, in comparison, comes in 15th in automated driving technology. But with its massive investment in the new joint venture, Hyundai’s ranking is expected to rise considerably.

It’s no exaggeration to say that Hyundai Motor’s self-driving technology is at the bottom in the world rankings, although it has some of the world’s leading technology in hydrogen fuel cell electric vehicles. However, by forming the new joint venture with Aptiv, the company is hoping to remedy this shortcoming and become the first mover, not a fast follower, in the auto industry.

In the global automotive industry, carmakers are strengthening their collaboration not with other automakers but with information and communication technology firms. General Motors acquired Cruise Automation in 2016 to respond quickly to an era of self-driving vehicles. With the same purpose, carmaker Toyota and technology company SoftBank Group Corporation in Japan set up a joint venture named Monet Technologies last year. Meanwhile, Volkswagen and Ford are investing in Argo AI, a self-driving startup, to develop their own autonomous driving technology. BMW collaborates with Mobileye, a subsidiary of Intel, while Renault Nissan is seeking to secure a technological advantage through cooperation with Waymo, Google’s self-driving company. All these developments are the result of a sense of crisis within the industry. Automakers are concerned that they may end up falling behind if they lack self-driving technology.

For Hyundai, the joint venture with Aptiv could offer an opportunity to apply its hydrogen-powered electric car technology to autonomous driving.

The application of hydrogen fuel cell vehicle technology to self-driving, if realized, will be highly significant.

Eco-friendly vehicles, electric cars and hydrogen-powered vehicles may play their respective roles separately. In other words, the former can run short distances in cities, while the latter might be used as buses or trucks for long-distance travel. It is said that self-driving will be complete when relevant technology reaches Level 4 or Level 5. In that stage, electricity consumption increases drastically. Since battery-powered electric cars have limitations to support self-driving, hydrogen fuel cell vehicles capable of operating longer distances are considered more suitable for autonomous driving. Hyundai Motor is undoubtedly a leader in hydrogen technology. If the company incorporates self-driving technology into its advanced hydrogen technology, it will be able to lead the market in zero emissions and self-driving cars.

Autonomous cars, where the human driver is replaced by AI, are currently in the trial stage. When autonomous vehicles go to Level 4 and Level 5, they consume a lot of energy since AI and cloud capabilities are essential. Hydrogen fuel cell vehicles can drive longer distances, so they may become an appropriate platform for self driving. This is good news for Hyundai Motor, which boasts leading technology in hydrogen and electric vehicles.

Although Hyundai’s self-driving car technology is at the lowest level, its hydrogen vehicle technology comes in first. At present, Hyundai’s Nexo is in a three horse race with Toyota’s Mirai and Honda’s Clarity in the hydrogen car market. In terms of technology, the Nexo outperforms the Japanese models. In addition, Hyundai’s electric vehicle or EV model called Kona accounts for 80 percent of the domestic EV market and is selling extremely well in the global market. Hyundai Motor is one of the top five EV makers in the world.

The integration of self-driving technology with these two types of pollution-free vehicles, in which Hyundai has already secured world-class technology, and the arrival of a shared economy will enable the Korean automaker to expand its business models.

Following its historic and successful mass production of a hydrogen-fueled electric car in 2013, Hyundai Motor released the Nexo in 2018. The model ran about 360 kilometers for a single trip, marking the longest test drive for a hydrogen vehicle. Hyundai began to invest in electric vehicles rather late. Through constant research and development, however, it raised its ranking in the global EV market from 15th in 2014 to 5th this year.

Hyundai has adopted a two track strategy of developing both electric and hydrogen vehicles. Now that the company is ready to develop a self-driving platform through the joint venture, it is accelerating efforts to stay ahead in the future automotive market.

In the automobile industry, future success hinges on how extensively carmakers collaborate with firms across different industries—a phenomenon described by some as “cohabitation with the enemy.”

Over the last 130 years, the auto manufacturing industry has maintained a vertical structure, where smaller subcontractors work under top players. But in the future, automakers will have to cooperate with companies producing high-value components, providers of automotive semiconductor solutions and software developers. It is uncertain which company will lead the market in this horizontal structure. Carmakers need to team up with other firms aggressively and secure core technology to survive in the market. I think Hyundai Motor should focus more on breaking away from its existing vertical structure. In this respect, the company’s recent attempt to invite new talent from the outside is a positive development.

The automobile industry served as the major engine of the global economy in the 20th century.

Starting in the 21st century, however, carmakers from around the world have grown beyond being mere manufacturers and opened an age of unlimited competition as they join forces with or compete against companies in different industries.

Every player in the industry is running hard towards a new future. It remains to be seen if Hyundai Motor’s bold investment will help the company become a game changer in the evolving industry.