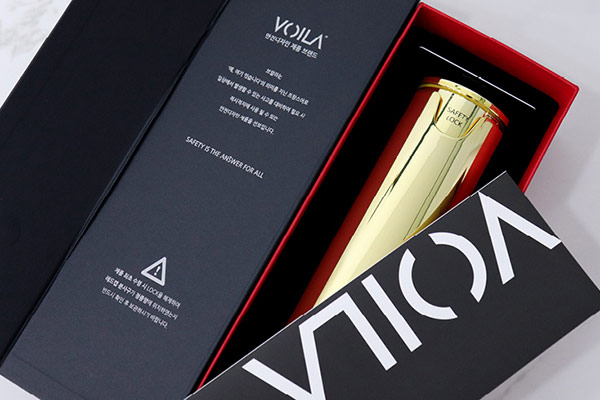 Happymily was founded in May of 2017 as a manufacturer of safety products with chic designs. As a combination of the words “happy” and “family, the company name represents its pursuit of a happy family by creating a safe space and safety culture at home.

My parents were firefighters. From childhood, I understood how serious fire accidents were. One day, I happened to see a fire extinguisher while walking up the stairs. I wondered why the fire extinguisher was red, if the color was set by law, and if people would know where it was when a fire broke out. Naturally, I thought of my parents, who had been dedicated to fire safety for over 30 years. I found myself hoping to contribute to fire prevention, though only in a small way. So I began to research fire extinguishers to make them more accessible to people and not to leave them unused.

Most safety products do not consider designs. But times are changing and designs are becoming an indispensable part of any product. It is pretty simple to use our fire extinguisher, which has a sleek design. Most of all, it can be installed in any place that people can easily see, reawakening them to the importance of fire safety.

Our fire extinguisher named Voila is also known as a tumbler extinguisher because it looks like a tumbler. Its coverless, left-right sliding system features a unique design that has never been found in existing extinguishers. When the appliance is not in use, you can turn on “Lock” mode. To use Voila, you can simply turn the upper part of the device and press down to release the content. I bet people of all ages can use it easily. It contains a 450-gram loaded stream agent—the highest capacity among existing portable fire extinguishers in Korea—and can shoot as far as 3 to 4 meters for 23 seconds. It is 27.5 centimeters long and only weighs 745 grams. The small and light fire extinguisher spray can be used conveniently at home.

According to the National Fire Agency, 440-thousand fire accidents occurred in Korea from 2008 to 2017, causing property damage worth 3 billion US dollars. Extinguishers are a must to quickly contain a fire, which incurs tremendous damage once it breaks out. But in general, it is not easy to use fire extinguishers installed at home in Korea. Happymily also took note of the fact that red fire extinguishers looked almost identical. So it developed an innovative fire appliance, Voila. The tumbler-shaped extinguisher comes in different, elegant colors—white, black, gold and pink. The slim and modern design does not distract from any decoration for home interiors but adds aesthetic sensibility to the safety product.

Voila means “Yes, here it is” in French. As the word indicates, Voila is available whenever necessary. The extinguisher is suitable for home use, as it can be used like an aerosol spray. 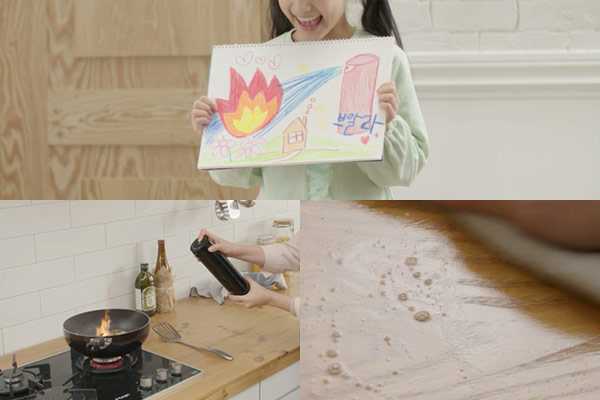 Voila is an aerosol fire extinguishing tool. Based on the loaded stream agent, Voila can handle general fires, oil fires and also cooking oil fires that can occur in the kitchen. Conventional powder-type extinguishers may put out a cooking oil fire but it could reignite. To extinguish the fire completely, it is necessary to lower the temperature of the cooking oil itself. Voila, a loaded stream-type extinguisher goes through a process known as saponification, in which it contains the flame first and quickly cools the temperature of the cooking oil so the fire can be controlled effectively. Another advantage of this type of extinguisher is that it does not require regular inspections and separate management. When not in use, it can be kept semi-permanently.

After using Voila, you can simply clean the remains with liquid. You don’t have to worry about any secondary damage from powdered substances discharged from traditional extinguishers. Approved by the Korea Fire Institute, Voila has drawn a positive market response for its sophisticated design and high performance.

Voila was launched in September of 2017, collecting 335 percent of its goal through the crowdfunding platform Wadiz. A lot more people showed interest in the fire extinguisher than I had expected, so I saw great potential in the product. It drew attention from the media and also won awards as well. It has been showcased on a local home shopping channel, and we now engage in business-to-business transactions. Sales are high among those in their 40s to 60s. Interestingly, many 30-somethings buy it as a house warming gift.

In the past, it was simply inconceivable to give a fire extinguisher to someone as a present. But this is exactly what we are pursuing. We welcome this positive change.

It is definitely worth noting that people buy this easy-to-use, stylish safety product as a gift. In addition to Voila, Happymily has developed a new product to expand its market presence further. It is considering tapping into markets in the U.K. and Taiwan.

Happymily will continue to unveil design products themed with safety. While our first product Voila is related to fire safety, our second product “Vehicle Teacher” is about road safety. It is capable of detecting the location of vehicles and traffic lanes so it can assist drivers in keeping their lanes and therefore provide them with a safer driving experience. Happymily will grow into a “safety provider” to present various products that combine creative ideas, safety and designs as one.

Happymily is awakening the public to the importance of safety in everyday life with its products that feature both functionality and design. The growth of this company, which has created a new paradigm of products, will surely spread safety culture and raise safety awareness.