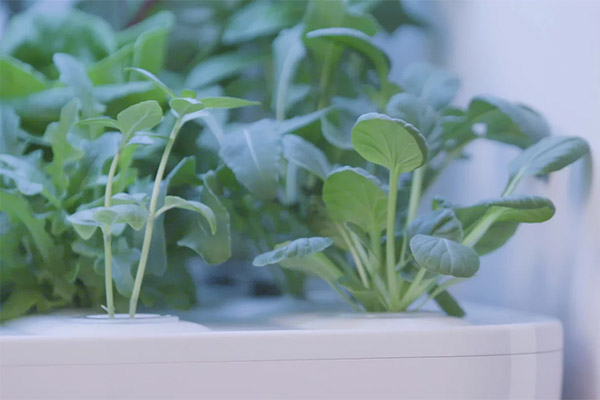 The 2019 Korea Electronics Show was held at COEX, in southern Seoul, from October 8th to 11th. To mark the 60th anniversary of Korea’s electronics sector, this year’s event was joined by 750 companies both from Korea and abroad to showcase prospective products and technologies of the Fourth Industrial Revolution, with 16 brilliant products receiving the “2019 KES Innovation Award.” For this week’s show, we’ll talk about one of the innovative products and companies that shined at this year’s KES. The company we’ll introduce is called AIPLUS. Let’s hear from its co-founder and CEO, Kwon Oh-yong.

Our home farming appliance, PLANTBOX, can be described as a kitchen garden in the form of consumer electronics. Those who have ever tended a vegetable patch will certainly understand how difficult the job is. It is necessary to learn about vegetables and take great care of them constantly. Many people just give up on the onerous work, so we wondered how to come up with a convenient and stylish tool to ease the hassle. We developed a smart home farming appliance and displayed it at this year’s KES.

PLANTBOX is a smart indoor veggie farming solution that won the Best Design award at this year’s KES. It looks like a small refrigerator, unlike conventional vegetable-growing boxes that typically take up a lot of space in apartment balconies. Once users plug in the seed capsules, the machine automatically sets the optimal level of light, temperature, moisture and nutrition for the plants so the users can grow vegetables easily. AIPLUS, a startup that was founded last year, is a spin off from Samsung Electronics’ in-house venture nurturing program.

I entered Samsung Electronics in 2004 and worked at the wireless business department to develop mobile phones. The co-founder of AIPLUS, Choi Seon-muk(최선묵), also worked at Samsung Electronics from 2006, but his job was related to consumer electronics. We thought that my experience in the Internet of Things or IoT and his expertise in home appliances could be combined to create something new.

The idea began to take shape when Choi went to a weekend farm with his children. As I said before, farming is laborious work. They had to work hard, catching bugs, in the hot sun. Exhausted, he stopped visiting the farm. He wondered how to grow vegetables in an easier way. Having heard about his story, I recalled my parents who used to cultivate vegetables and herbs on a rooftop garden.

We thought it would be interesting and meaningful to ease the inconvenience of home farming by using our own respective technology.

So, the idea of the new home farming appliance started from Choi’s painful experience at a local farm. Many people visit weekend farms or grow vegetables in a small patch in their apartment balconies in the hopes of eating fresh vegetables they have cultivated themselves. But most of them give up after some time because it is quite challenging for urban farmers to invest large amounts of time and control the damage caused by harmful insects.

To resolve the problems of home farming effectively, Kwon and Choi used their own knowledge about IoT and consumer electronics, respectively, and developed a new product. 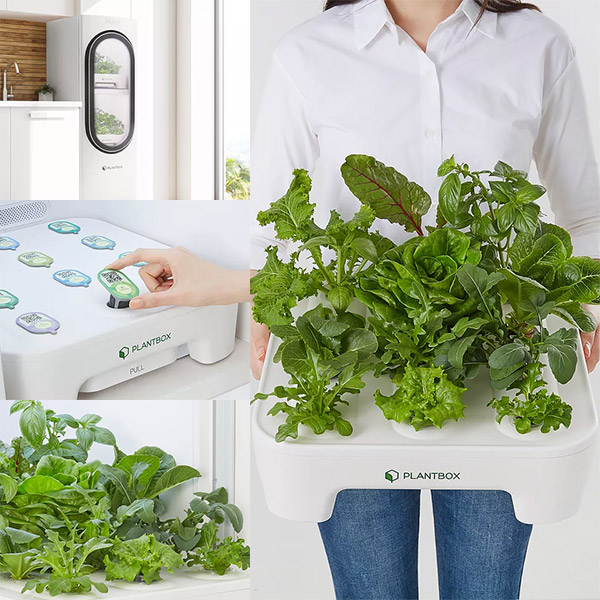 In addition to adjusting the temperature and moisture, PLANTBOX uses light-emitting diode or LED lighting to ensure the best wavelengths of light for photosynthesis.

Just like humans, leafy greens need to sleep when the sun sets. In the box, artificial lights appear slowly, just as the sun rises, so the indoor environment can be as similar to nature as possible. Apart from the physical conditions for greens to grow, human touch is also needed. Of course, this is the most challenging part. First, users stick smart seed capsules inside the box, which automatically identifies what kinds of vegetables are put in and sets the best environment for the plants. The indoor environment is connected to the users’ smartphone app through IoT. An alarm will sound on the app to remind them to water the veggies or replace some supplies. That’s all the users have to do, and PLANTBOX will do everything else.

The inside of the machine consists of three compartments. The bottom part is for watering, replacing consumables and checking the overall conditions. It is the other two compartments in the upper section where plants grow. We call them trays, which serve as a field. When smart seed capsules are put in the trays, nutrients are automatically mixed with the culture fluid on the trays. The plants absorb the nutrients and keep growing on the two trays. Of course, the machine ensures appropriate levels of temperature, moisture and LED lighting. The door can be opened and closed, just like a refrigerator, and is tightly sealed to block the vegetables from outside contaminants. So, users can grow fresh veggies regardless of the season or the weather.

Some companies have produced home farming tools before. But the market response was not very good since they were rather inconvenient to use. Also, there were design and flavor issues.

AIPLUS, a late starter, took a different approach by using a hydroponic cultivation method in a refrigerator-shaped electric appliance and adopting IoT technology. PLANTBOX enables people to enjoy delicious vegetables in their freshest state without using any pesticides. It only occupies 0.2 square meters but produces the same amount of veggies grown in a 3.3 square-meter garden. Users can water the plants just four or five times a month, and some vegetables are fully grown in 25 days. The company has applied for eight patents for the product.

Numerous people who visited AIPLUS’ booth at the recent electronics show were amazed to see the remarkable product. AIPLUS plans to commercialize next year to take the first step in bringing about a major change in the industry.

Currently, refrigerators, air conditioners, TV sets and washing machines comprise a major axis in the home appliance market, while air purifiers, clothing-care systems and body massage chairs are becoming popular these days as well. When a new product is released, market observers generally expect that the market will expand to invigorate the economy.

But what we really want is for PLANTBOX to help people change their lifestyle in a healthier way. Users of the product will realize that vegetables can be so fresh and even tasty, although they may not like veggies very much. They will then consume more vegetables and enhance their nutritional balance. After all, good nutrition and a balanced diet will keep them healthy, possibly preventing and curing high blood pressure, diabetes and obesity over the long term. We hope to provide a product that will bring about a positive change in people’s lifestyles.

Just as every home has a refrigerator, all households may have a smart home farming appliance in the future. AIPLUS is seeking to open a new frontier in agriculture and create another blue ocean in the home appliance industry. We’ll have to wait and see how the company’s innovative product will perform in the market.