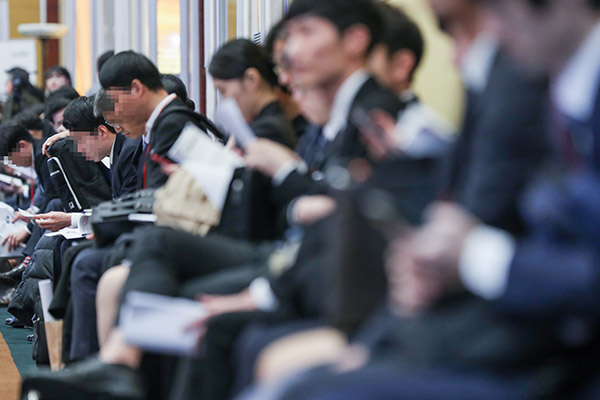 South Korea saw a sharp increase in the number of new jobs in October, maintaining a strong pace of job creation for the third consecutive month. The country added more than 400-thousand jobs last month compared to last year, with the employment rate for those aged 15 or older reaching a 23-year high for the month. On a negative note, employment for those in their 40s, the backbone of the economy, continues to decline.

According to Statistics Korea, over 27.5 million people were employed in October, up 419-thousand from a year earlier. It marks the second monthly job gains of over 400-thousand this year, following 452-thousand in August, and the highest October figure since 2014. Korea added more than 300-thousand new jobs for the third straight month, making analysts believe that the local job market is showing clear signs of recovery.

In particular, the employment rate, which indicates the ratio of job holders to the working-age population aged between 15 and 64, hit 67.3 percent last month, the highest number for October since 1989.

The employment rate for those aged 15 or older, with no age limit, also rose to nearly 62 percent in October. The service industry, in particular, added 486-thousand new jobs during the month, posting a higher job growth than the previous two months. On another positive note, the number of unemployed people decreased.

Around 1 million people remained jobless early this year, but that number fell to 864-thousand in October, down 108-thousand from a year ago. The unemployment rate for the working-age population stood at 3.0 percent, down 0.5 percentage point on-year, the lowest in six years. Notably, the unemployment rate for young adults aged between 15 and 29 was 7.2 percent last month, down 1.2 percentage points from a year earlier, to reach its lowest level since October of 2012, when the corresponding rate was tallied at 6.8 percent.

It is welcome news that the number of jobless people in the younger generation hit the lowest level in seven years. The Korean government says it marks the first time in 17 years that the increase in employment surpassed the growth in population for three months in a row, while both the employment and unemployment rates improved simultaneously. Even so, it is too early to be overly optimistic about the current employment situation.

There are clear signs of recovery in the key job indexes such as the employment and unemployment rates and the number of new jobs. But a closer look at the data shows some distortion in the employment market.

The job situation for breadwinners in their 30s and 40s is not very good, with some even giving up seeking jobs altogether. Fifty-thousand people in their 30s and 146-thousand in their 40s lost jobs in October. The number of the employed among 40-somethings has been on the decline since November of 2015.

Manufacturing, construction, and wholesale and retail are largely regarded as good quality job producers, but these sectors continue to struggle in terms of employment. Manufacturing jobs decreased by 81-thousand last month to prolong the downtrend for 19 consecutive months since April of last year. This is the longest streak since 2013. In addition, the retail and wholesale sectors and the finance and insurance industries shed more than 60 and 50-thousand workers, respectively.

Despite the improvement in job indexes, the government has to address the problem of the drawn-out slump in the manufacturing industry and the difficulties faced by job seekers in their 40s. People in their 40s are the only age group that has seen a continual decline in the employment rate. The number of unemployed people in this age bracket reached the highest level since the global financial crisis of 2009. The gloomy job situation among 40-somethings is mainly attributed to the weak employment growth in the private sector, while jobs in the wholesale and retail industries have fallen for the fifth straight month.

In contrast to the contraction in job numbers among those in their 40s, the elderly held most of the new jobs created last month.

One of the most noteworthy parts in the October employment report is that we saw the sharpest elderly job growth since July of 1982 when relevant data began to be compiled. Of the newly added 419-thousand jobs last month, most of them or 417-thousand were held by those aged over 60.

By sector, lots of jobs were created in healthcare and welfare. We can understand that it is necessary to increase jobs for senior citizens through government spending amid an economic slowdown. Considering that the rate of Korea’s elderly poverty remains at the highest level in the OECD, the government is believed to have made the right decision to expand jobs for the elderly in the healthcare and welfare areas.

However, those low-paying jobs are mostly temporary and less likely to last. It is important that jobs created through tax spending lead to quality jobs from the private sector.

The statistics show that the number of those who work fewer than 17 hours a week increased by 339-thousand. Judging from the numbers, the strong employment growth in October was driven by temporary jobs created through tax spending for senior citizens. Of course, the rise in the number of the employed among the elderly has been influenced by the fact that Korea is the fastest aging society in the world.

Still, the government needs to resolve problems such as employment driven by those aged 60 or older, a decline in job numbers for those in their 40s and the weak job market for manufacturing.

Quality jobs that pay a decent wage come from the private sector, not from the public one. The government needs to eliminate unnecessary regulations standing in the way of nurturing new growth engines and carry out industrial structural reform so that a favorable business environment can be formed. The government and the political community should mediate disputes between new and old industries and present a compromise. With the working-age population shrinking in the rapidly aging society, it is necessary to overhaul the nation’s seniority-based pay system quickly. This is one of the solutions to create more jobs for young adults.

South Korea is posting a sharp drop in the potential growth rate. In this situation, the government, labor and management should join forces to increase productivity and hone industrial competitiveness. The business sector, for its part, should not just complain of the difficult reality but make an all-out effort to explore new growth engines through bold, preemptive investment. Then, more quality jobs can be created by the private sector.

The Korean government says that signs of job recovery are clear, citing the recent key employment indexes. But it’s too early to pop the champagne. It needs to generate many more high-quality jobs by reinvigorating the market.