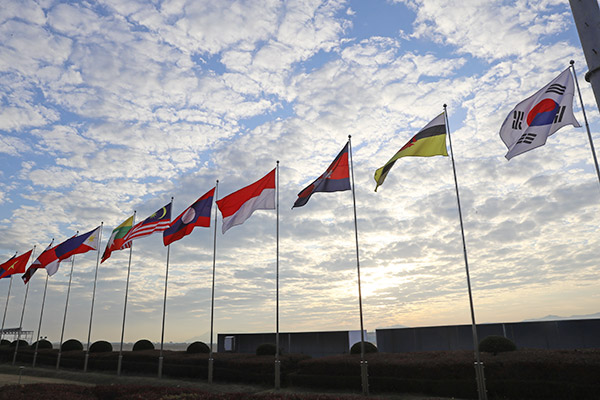 Leaders of the 10-member Association of Southeast Asian Nations, or ASEAN, have gathered in the South Korean port city of Busan to attend the ASEAN-Republic of Korea Commemorative Summit. The group summit is being held as part of celebrations for 30 years of dialogue partnership between South Korea and ASEAN, which has a population of 650 million and a total gross domestic product of about 3 trillion US dollars. Today, we’ll discuss the implications of the Korea-ASEAN special summit with economic commentator Chung Chul-jin.

South Korea has maintained close relations with ASEAN. It marks the third time that Korea has held a special summit with ASEAN, following the first one in Jeju in 2009 and the second one in Busan in 2014. South Korea is the only country among ASEAN’s partner nations to have hosted the summit as many as three times. This year’s summit is all the more noteworthy as Korea and ASEAN commemorate the 30th anniversary of dialogue relations. The diplomatic event will also underline the significance of President Moon Jae-in’s signature New Southern Policy designed to strengthen ties with ASEAN.

Following the Korea-ASEAN special summit on November 25th and 26th, the inaugural Mekong-Republic of Korea Summit will also take place in Busan on November 27th. Cooperation between South Korea and the five Mekong countries—Laos, Myanmar, Vietnam, Cambodia and Thailand—was previously discussed at the ministerial level, but the meeting has been elevated this year to a summit level.

In the midst of the intensifying trade dispute between the U.S. and China and Korea’s recent tensions with Japan, the multilateral conferences this week will provide Korea with a great opportunity to cement cooperation with ASEAN.

ASEAN members have grown at an average annual rate of 5 to 6 percent. In particular, Cambodia, Laos, Myanmar and Vietnam have posted high growth rates of 6 to 8 percent. Singapore, Thailand, Malaysia, Indonesia, the Philippines and Brunei have also expanded their economies considerably. It comes as little surprise that not only Korea but many other countries are also paying attention to the growth potential of the region.

As one of the fastest growing economies in the world, ASEAN is emerging as a source of economic growth for South Korea. The region represents the world’s third largest market after China and India, which have a population of 1.4 billion and 1.3 billion, respectively. Most of all, the average age of the population in ASEAN is in the 30s, meaning that people in the region are young and productive. It is an ideal production base and consumer market with high growth potential.

Also, ASEAN may help South Korea reduce its heavy reliance on the U.S. and China for trade. That’s why President Moon has kept a close eye on ASEAN since his early days in office.

Formerly, South Korea focused on the policy of engaging in northern regions like China and Russia. But President Moon turned his eyes to the south, namely, Southeast Asia, under his New Southern Policy that was introduced in November of 2017. As president, Moon has visited the Philippines, Vietnam, Singapore, Malaysia, Cambodia and Brunei so far. This year’s Korea-ASEAN summit is expected to promote bilateral ties further and help the New Southern Policy gain traction.

South Korea and ASEAN formed “dialogue partnership” in 1989. They signed a comprehensive cooperative partnership agreement in 2004, and upgraded their ties to strategic partnership in 2010. And in 2017, South Korea announced the New Southern Policy, which presented a vision for strengthening Korea’s cooperation with ASEAN and India to the level of its four key neighboring countries.

Indeed, Korea is approaching ASEAN actively. South Korea and Indonesia signed the Comprehensive Economic Partnership Agreement last month, while Korea is also working to conclude a bilateral free trade agreement with Malaysia and the Philippines. Economic cooperation between Korea and ASEAN has expanded as well. Last year, the trade volume between the two sides amounted to over 159 billion US dollars, representing a remarkable growth from a mere 2.6 billion dollars in 1980.

But Korea is not the only country that has strengthened economic engagement in the area.

Countries other than Korea, like Japan and China, are also well aware of ASEAN’s potential. Japan has actively promoted trade in goods, services and investment with ASEAN, while China has expanded infrastructure investment in the region. A closer relationship with ASEAN is certainly an opportunity for Korea. But it means Korea has to compete against its two neighboring countries in the process.

On a positive note, Korea has a strong edge, namely, the popularity of Korean pop culture overseas, known as hallyu. Korean beauty products and cultural content as well as K-pop are fascinating fans in the ASEAN region.

ASEAN’s policy to lure foreign investment will positively influence its industrial development and infrastructure expansion. Japan and China, in particular, have capitalized on the policy to increase their presence in the region. Korea, for its part, has created a hallyu boom in culture and construction in ASEAN by using soft power, in which its comparative advantage lies. But in order to further expand cooperation with ASEAN, Korea should show its distinctive strengths.

Summit meetings are important, of course. But it will also be great for Korea to draw attention to economic and cultural events on the sidelines of the main conference. For example, leaders from unicorn start-ups, whose value is estimated at over 1 billion US dollars, from Korea and ASEAN shared their business experiences at a separate session. Another event called the ASEAN-ROK Culture Innovation Summit will bring together leading figures in cultural innovation, including Netflix co-founder and CEO Reed Hastings and Bang Shi-hyuk, the CEO of Big Hit Entertainment and the man who is better known for the creation of the latest K-pop icon BTS. These events will raise awareness of the importance of economic and cultural exchanges between Korea and ASEAN.

Korea also needs to boost personnel exchanges with ASEAN to promote its image among local people and win their hearts faster and more effectively than Japan or China. I hope this week’s event in Busan will serve as the first step toward that goal.

The slogan of the Korea-ASEAN Summit is “Partnership for Peace, Prosperity for People.” As the slogan indicates, the two regions will hopefully be able to walk a path of co-prosperity.