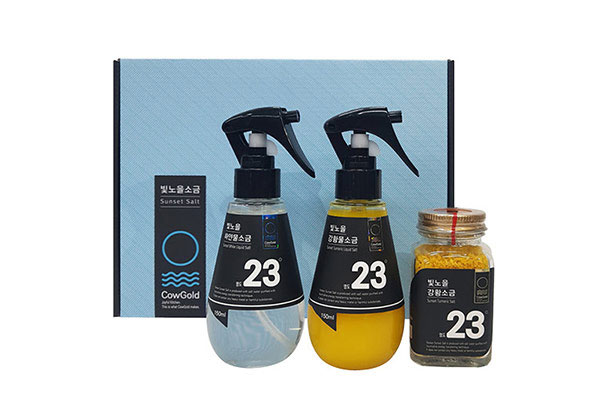 The company we’re going to introduce today is Cow Gold, a developer of liquid spray salt. Here is company CEO Chae Je-du to explain how his firm got this interesting name.

The company name, Cow Gold, derives from a wordplay using the Korean words for cow and gold, which are “so” and “geum,” respectively. The combination of the two words, that is, sogeum, means “salt” in Korean.

So, once hearing Cow Gold, Koreans will be reminded of so-geum or salt and this unique name will remain in their memories for a long time.

Initially, we manufactured industrial water purifiers and provided them to salt farms on the west coast. The machines proved effective in purifying sea water at first, but it became dirty again later. So we turned our eyes to salt instead.

Created in 2016, the company supplied salt refining systems to local salt fields. While looking around salt farms, Mr. Chae came up with a new business idea. He decided to combine the technology of eliminating impurities from sea water with salt production. In fact, sogeum or “salt,” is a pure Korean word indicating that salt is as precious as so or geum, which mean cow and gold, respectively. So the company began to manufacture premium salt with its own technology.

We bring salt from the far southern village of Sinan(신안) and dissolve it in our functional water at our inland factory located in Gongju, South Chungcheong Province. Our water purifier filters out floaters and impurities from the salt water about three times. Then we let the water mature in a container exposed to far infrared radiation for 24 hours before letting it dry in a red clay room for 48 hours. In the process, heavy metals are removed. We ensure that the salt water does not contain any impurities through visual inspection.

Cow Gold uses natural sea salt harvested from the mudflat in Sinan County on the west coast. Salt from the area, one of the world’s top five mudflats, is rich in minerals, iron and calcium. The company dissolves the highly-quality salt in hexagonal water using tourmaline, which is the only gemstone on Earth that has permanent electrical properties, before filtering it out in five different stages. The refining system developed by the company eliminates 99.9 percent of impurities from the sea salt and keeps good substances intact.

The most amazing part is that salt refined in this way takes the form of liquid, not powder. Liquid salt may still be unfamiliar to consumers. To help them use liquid salt easily, the company developed liquid spray salt using nanoparticle technology. Last year, the company received an award at the LSA Innovation Awards organized by LSA, a leading retail magazine in France. 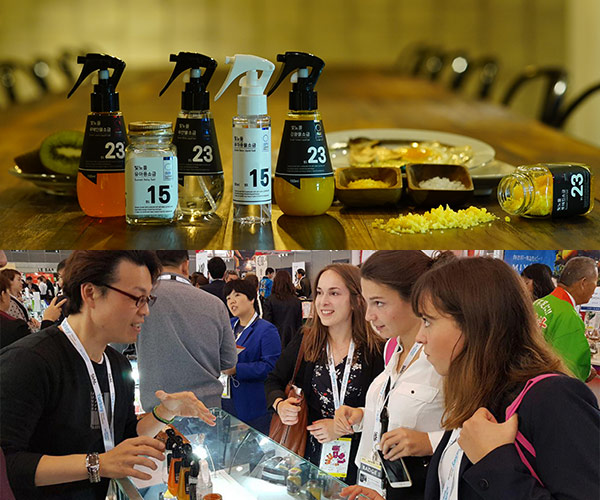 Our liquid salt under the brand name of bitnoeul(빛노을), which is roughly translated to “sunset glow,” has low sodium content—as low as only one-thirtieth of general powdered salt. So it is very good for those on diets and people with high blood pressure. We put a great deal of effort into the development of the salt, so we were very happy and proud to be recognized with such a prestigious prize at the LSA Innovation Awards. Cow Gold is the first Korean company to win the award.

Also, it is the only salt product that indicates salinity. In the case of ordinary refined salt, it is difficult to measure salinity precisely because each grain of salt has different salinity levels. To produce liquid salt, natural sea salt is dissolved in water first and refined through an alkaline reduced water purifier so the level of salinity can be made even. In order to cook well-seasoned dishes, users can simply spray liquid salt on food without having to blend ingredients repeatedly or make an effort to sprinkle powdered salt evenly.

Powdered salt in a container is prone to damage from moisture and dust when the lid is open. But liquid salt can maintain its best condition for a long time. Users of this salt product may just spray liquid salt on any food like fried eggs and pork belly. They can even reduce their sodium intake without compromising flavor. A French chef named Damien said that he was able to save five years of time needed to learn the skills of seasoning food by simply spraying our salt while cooking foie gras. Encouraged by the chef’s lavish praise of our salt, we’ve exported our products to France.

Chefs of French cuisine tend to use a sufficient amount of salt as long as it does not spoil the taste of ingredients. Cow Gold gained recognition in France, where chefs are picky about the use of salt. With its healthy, low-sodium liquid spray salt that does not form a hard mass but is interspersed evenly, the company will move toward its goal of winning the title of the world’s best salt.

We’ve been able to enter the French market with our healthy and reliable item. We hope to explore wider markets and grow into a global firm. Gold never decays. Like salt and gold, we wish to remain consistent and unchanged.

Jesus compared his disciples to the salt of the earth in the book of Matthew. By developing a new type of salt, Cow Gold is enhancing the value of this precious material and broadening the horizons of the salt market.