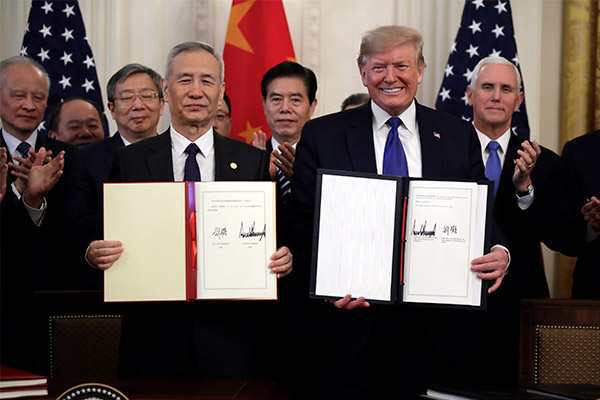 In a significant step toward easing the 18-month-long trade war between the U.S. and China, U.S. President Donald Trump and Chinese Vice Premier Liu He signed a so-called “phase one” trade deal at the White House on January 15th. Here in Korea, attention is being drawn to whether this positive development will benefit the local economy. Today, we’ll discuss the implications of the recent trade agreement between the U.S. and China with Kim Dae-ho, director of the Global Economic Research Institute.

The deal is essentially a truce in the trade war between the world’s two largest economies. Last week’s signing ceremony at the White House is truly significant, considering that the trade dispute had dealt a serious blow to the world economy, with global GDP getting lower. There were concerns that the trade conflict might bring an end to free trade internationally and strengthen trade protectionism instead to prompt countries to fight for their own interests. Fortunately, the G2 managed to rein in their trade row, which was previously feared to escalate into a full-blown trade war.

A tumble in the G2 economies heightened uncertainties over the global economy, while trade protectionism spread across the world. Whenever the two countries slapped tariffs on each other’s goods, stock markets around the world fluctuated wildly.

The preliminary trade deal between the U.S. and China is indeed good news for the global economy. On January 15th, the Dow Jones Industrial Average closed above 29-thousand points for the first time. Mr. Kim now explains the agreement in more detail.

Under the new agreement, China will increase its purchases of American products and services by at least 200 billion US dollars over two years. Apparently, the agreement takes into consideration the Midwestern farm belt in the U.S., where local farmers largely stand by President Trump.

Last December, the U.S. and China agreed on trade issues involving eight sectors including intellectual property, agricultural products, financial services and wider market access. Based on this agreement, China promised last week to buy at least an additional 200 billion dollars worth of American goods and services for two years from now. The 96-page-long pact spells out detailed figures in each category. But the U.S. will leave some tariffs in place until a “phase two” deal is signed. That means Washington can raise the tariffs at any time if Beijing fails to keep its promise.

Although the recent agreement did not touch upon the contentious issue of the Chinese government’s business subsidies, the two sides seem to have taken care of some of the most urgent problems. Of course, this is welcome news for the Korean economy.

Defused trade tensions between the U.S. and China will certainly bring some relief for the Korean economy, which relies heavily on exports. The risks arising from the trade war haven’t been removed completely yet, but still, easing the trade conflict is certainly a good sign for the local economy. Since the trade deal was signed, the Korean stock market has enjoyed upward momentum.

Korea’s exports in 2019 stood at 542.4 billion dollars, down more than 10 percent year-on-year, in the aftermath of the U.S.-China trade war. It was the first time in a decade that the annual export recorded a double digit percentage decrease. As China accounts for nearly 30 percent of Korea’s total outbound shipments, the latest China-U.S. trade deal is considered all the more positive. More trade between the U.S. and China is expected to increase demand for cargo planes and commercial vessels as well as sales of Korean automobiles and electronics goods.

But it is too early to be overly optimistic, since China agreed to import more American products.

It is hard to say that the trade deal will benefit the Korean economy in all areas. Of the American goods that China promised to import, agricultural products are not really a problem for Korea. But industrial goods do matter. Korean exports of semiconductors, in particular, could be adversely affected. For example, China may choose to import semiconductors from Intel of the U.S., rather than from Samsung Electronics of Korea. So, Korea needs to examine what products are included in the 200 billion dollars worth of U.S. products to be purchased by China and come up with proper countermeasures.

In a report last November, the International Monetary Fund estimated that South Korea’s exports may decline by 46 billion dollars if China increases its imports from the U.S. in ten areas including electronics goods, machinery and automobiles.

On January 15th, U.S. Vice President Mike Pence said that the U.S. and China had already started their trade negotiations for a phase two agreement. But the negotiations seem to face a bumpy road ahead, as the two sides have to address a number of long-disputed issues.

Upon the signing of the phase one agreement, the second phase of negotiations started. What we have to focus on in the coming month is Chinese intellectual property theft. U.S. companies have so far complained that Chinese firms caused damage to them by illegally copying and selling their ideas and technology. Under the recent trade deal, China agreed to codify intellectual property protections by early February.

In addition, the two sides are expected to engage in a grueling tug of war over other issues such as the Chinese government’s subsidies for state-run companies, forced technology transfers, market openings in China’s financial services industry and currency practices.

The U.S. and China have paved the way for settling their trade dispute but they still have to deal with various tricky issues that are left unresolved. The Korean economy breathed a sigh of relief, but it should remain alert to any emerging risks.