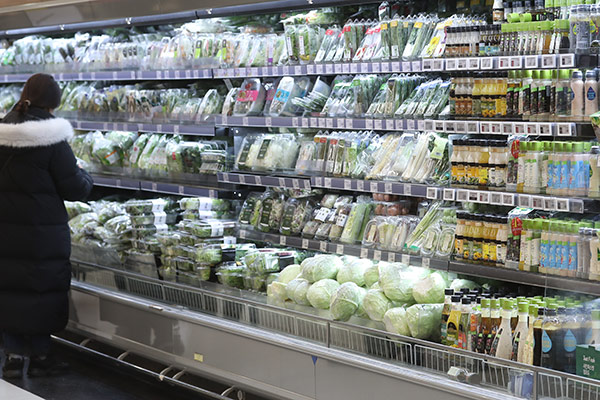 South Korea’s consumer price growth in January was back above 1 percent for the first time in about a year, easing concerns that the economy might fall into a trap of deflation. Still, we’ll have to wait and see if the inflationary upturn will continue, as last month’s figures do not yet reflect any impact from the new coronavirus. Here is Lee In-chul, director of the Real Good Economic Institute, with more.

According to Statistics Korea, the consumer price index in January was 105.79, up 1.5 percent year-on-year. The rise was mainly driven by an increase in prices of oil and agricultural products.

Prices of agricultural, livestock and fisheries products rose 2.5 percent. Among vegetables, radish prices soared a whopping 126 percent, while those of napa cabbage and lettuce grew 76 percent and 46 percent, respectively. Industrial goods prices also rose 2.3 percent. Petroleum products, in particular, jumped over 12 percent to mark the fastest gain since July of 2018 and lift the overall consumer price growth by 0.49 percentage points.

Service prices increased 0.8 percent on the back of higher costs for private services and other services that gained 1.7 percent and 2.3 percent, respectively, pushing up the overall headline inflation by 0.44 percentage points.

The 1.5 percent growth in consumer prices last month was the highest increase since November of 2018, when the rate was 2 percent. Price growth slowed to zero percent in August of last year and plunged 0.4 percent the following month to post the country’s first-ever negative inflation. Fortunately, it rebounded to 0.2 percent in November and rose 0.7 percent in December. The upswing in consumer prices continued In January this year.

There are three major reasons behind the rise in prices. First, last year’s low inflation was largely attributable to the base effect because prices were relatively high in the previous year, but this base effect is starting to fade. In fact, poor crop yields have led to higher vegetable prices. Second, the government’s welfare programs like free education and extended health coverage contributed to low inflation last year, but this effect has also waned. Third, international oil prices have been on the rise in the wake of the U.S.-Iran conflict, while the Korean government’s temporary tax cut on fuel is over. It would be fair to say that gains in oil prices led the increase in consumer prices.

If higher vegetable and oil prices had not led inflation, Korea could slide into deflation, a phenomenon of a persistent fall in prices amid economic stagnation.

In 2019, Korea’s consumer prices only rose 0.4 percent on-year. The slowest growth since 1965 raised concerns that it might be a prelude to a Japan-style long-term depression.

Before 2019, there were only two occasions of inflation in the zero percent range in Korea: 0.8 percent in the aftermath of the Asian financial crisis in 1999 and 0.7 percent during the outbreak of the Middle East Respiratory Syndrome or MERS in 2015. It is very unusual for the inflation rate to dip to the zero percent range without any major external shock.

Korea has already seen major economic indexes falling, indicating the nation’s growth engine is losing steam. Its growth potential has plunged to the mid-2 percent range, while exports have declined for 12 consecutive months. The average factory operation rate has tumbled to the low 70 percent level. It is widely believed that the low inflation trend resulted from a slowing economy and weak domestic demand.

Some may think that the lower inflation is the better. But if prices remain too low for an extended period of time, it might lead to a prolonged slump and invite a vicious circle of shrinking corporate investment, a decline in household income and sluggish domestic consumption.

The worst-case scenario is a Japan-style deflation, where low prices coincided with low growth. The Japanese economy began to deteriorate in the early 1990s when the nation’s asset price bubble collapsed and slipped into long-term recession, which is described by some as the “lost two decades.” Under the grip of deflation, companies were discouraged from investing, asset prices plummeted and consumers spent less. As a result, the stagnation in domestic demand continued.

For Korea, it is fortunate that the inflation rate has recovered to the 1-percent level to reduce fears of deflation. But it is still too early to relax.

The impact of the new coronavirus outbreak is likely to affect consumer prices in February. The outbreak of the Severe Acute Respiratory Syndrome or SARS in 2003 didn’t have a major impact on consumer prices.

When the nation was hit by MERS in 2015, services prices related to sports, leisure and culture edged down in May and June but rebounded in July right away.

Even so, we cannot rule out the possibility that the virus issue may pour cold water on the hard-earned recovery momentum and drag down consumer prices.

The government expects that the new coronavirus outbreak will only have a limited impact on consumer prices, citing the two precedents of SARS and MERS.

But if the virus is not contained quickly and dampens consumer spending, the low inflation trend might revive. The retail industry has already been reeling from the outbreak of the virus. Sales at major department stores on the first two days of February decreased more than 11 percent, compared to the first weekend after the Lunar New Year holiday of last year.

The government and the Bank of Korea expect consumer price growth to stay above 1 percent this year. The Korea Development Institute forecasted an inflation rate of 1.3 percent, while the OECD’s was at 1.1 percent. These projections are far below the central bank’s target of 2 percent. Inflation in Korea has been below 2 percent for the last 14 months. As the government is expected to keep its welfare programs in place for the time being, it will be difficult to reach the 2 percent target.

Moreover, some unexpected factors like the conflict in the Middle East and the global spread of the new coronavirus may intensify downward pressure on prices from the demand side. In the mid to long term, it is necessary to stimulate domestic demand, especially amid declining exports.

When the economy is on track, consumer prices show a steady upward curve. Companies increase investment to earn profits, creating a virtuous circle of more employment opportunities, a rise in income and consumption and brisk domestic demand. In the process, the economy picks up steam. Korea’s consumer price growth has managed to rise above 1 percent for the first time in 13 months. It will be important to keep the upward momentum going.