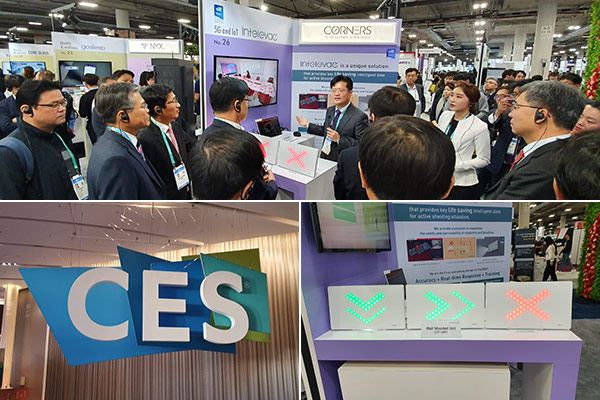 Today, we’ll introduce a company named CORNERS, the recipient of the Innovation Award at CES 2020. Let’s hear from Kim Dong-oh, CEO of the company.

We received the CES 2020 Innovation Award with our solution called IntelEvac, which is short for Intelligent Evacuation. The IntelEvac system detects and tracks the location of gunfire, and guides people to exits or instructs them to take cover immediately and safely. A solution in the U.S. recognizes the sound of gunfire and reports to the police. It takes 12 minutes on average for the police to arrive on the scene. Unfortunately, a shooting incident may result in dozens of victims during the 12 minutes. But our system gives instructions for evacuation before the police arrive so it can minimize casualties. This is only one of its kind. I think CES recognized this unique feature.

CORNERS unveiled its intelligent gunfire response system at CES 2020, which was held in the U.S. from January 7th to 10th. When a shooting accident occurs, the solution quickly instructs people how to respond and proposes evacuation and rescue plans based on on-site conditions. The extraordinary system caught the eyes of participants at this year’s CES. An official at the U.S. Department of Homeland Security even said that he would ask for the introduction of CORNERS’ solution.

In recognition of its new technology, the company received the CES Innovation Award in the “Tech for a Better World” category. Perhaps, the award best represents the purpose of the company’s establishment.

The company was founded on November 9th, 2014. There were disasters and accidents that claimed many lives in that year. We set up the company in the belief that technology developers should no longer turn a blind eye to social problems but should use technologies in a way to benefit society.

While thinking about a name for the new company, I happened to hear a hymn at a Catholic church. I was amazed by the lyrics, “If we can create a world filled with love, I would be eager to serve as a single brick that upholds a small corner, even though I may be feeble.” Inspired by the phrase “a single brick that upholds a corner,” I named the company “Cornerstones Technology.” It was renamed CORNERS in 2017.

The company’s foundation day, November 9th, shows its determination to respond actively to any crisis, as the number 119 is the emergency access number for fire reports or emergency medical services in Korea. In 2014, the sad year reminiscent of the tragic sinking of the Sewol ferry in Korea, three programmers, including Mr. Kim, co-founded the company with the purpose of preventing similar disastrous incidents from occurring.

When an accident or disaster happens, it is necessary to guide a large number of people in different locations to different exits, not letting them flock to one place. Calculating multiple evacuation routes is a matter of mathematical science. So, the programmers of the company developed an algorithm for a year. In 2016, CORNERS completed an intelligent evacuation guidance solution.

When a fire broke out in the past, people were not usually guided to fast and safe evacuation routes, that weren’t exposed to danger. They simply tended to follow the person in front of them. Even if the person knew the way, he probably had no idea of exactly where the fire started. So, if he encountered obstacles like toxic gas, he had to go in the opposite direction. In an emergency situation like that, people can’t even spare one second. But if they run about in confusion in the initial stage, the chances of survival fall drastically.

In our solution, the Internet of Things or IoT devices in each location identify where the accident occurred and show people the safest ways to evacuate. This is what makes our product stand out.

In case of emergency, people tend to flounder. A test result shows that the IQ of a panic-stricken adult might fall to the level of an infant. For those who are unable to make normal reactions under emergency, CORNERS’ device offers an audio and visual evacuation guide. You may be thinking of wall-mounted emergency lighting. But it is a much more sophisticated, IoT-based solution that instructs the best possible evacuation routes in real time, away from fire, fumes or shootings. This evacuation guidance system has been installed at public offices, companies and factories in Korea, including the Korea Rail Network Authority, the Korea Institute of Ocean Science & Technology, SK hynix, Lotte Shopping and GS Engineering & Construction. The system is under the test phase in the U.S., where gun incidents occur frequently. 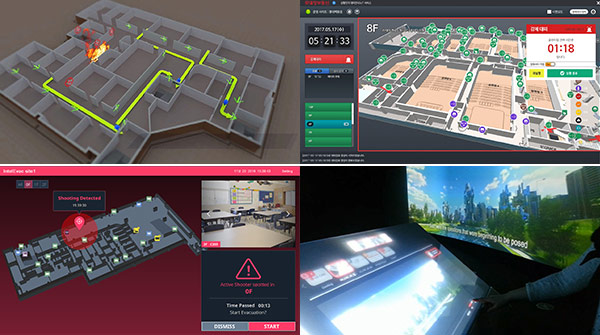 We started exploring the market in the U.S. in 2018, completing some tests there. Currently, a test project is being carried out at the Public Safety Training Academy in New Jersey to measure the solution’s technical performance.

Once its ability is proven, I believe large companies and public institutions in the U.S. will adopt the system.

CORNERS set up its American branch last year. Given the enthusiastic response to its solution at this year’s CES, it is almost certain that the system will enter public institutions in the U.S. if and when its technical performance is verified. The U.S. is not the only market that CORNERS is tapping into. The Inter-American Development Bank has recommended the company to expand its business to Central and South America, as it is urgent for shooting incident-prone countries like Brazil, Mexico and Colombia to prepare for some preventative measures.

Indeed, CORNERS is growing into a leading provider of smart solutions that keep people safe.

I think safety is our primary concern. With the smart combination of digital technology and artificial intelligence, we can hopefully change the paradigm of the global safety industry. That means we can use this field as a new, important growth engine. More and more people around the world will recognize the usefulness of the system, in which people in panic do not have to find a way out themselves but are instructed to respond to emergency situations in an efficient and timely manner. We’ll continue to work hard to become a leading global firm.

CORNERS uses its technology to prevent disasters effectively and evacuate people from the disasters promptly. In doing so, the company is contributing to ensuring safety in society and changing the world in a better way.