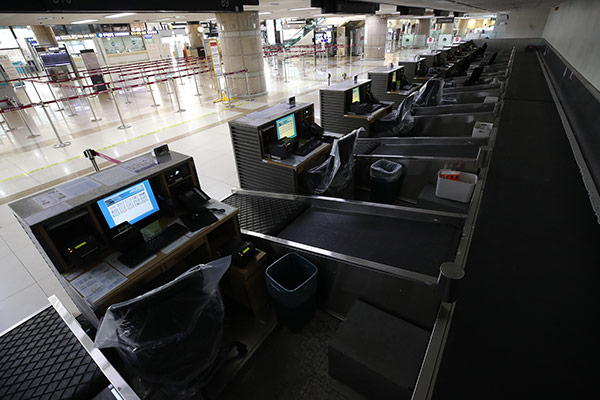 On March 11, the World Health Organization declared the latest coronavirus outbreak a pandemic, the highest of an alert level that indicates the worldwide spread of the infectious disease. The official declaration led to major stock market crashes around the world, with fears of an economic contraction growing. In response, governments in many countries are preparing for bold, stimulus measures to boost their economies. Here is Lee In-chul, director of the Real Good Economic Institute, to discuss the aftermath of the pandemic declaration.

The pandemic declaration last week marked the third time for the WHO to raise its health alert to the highest level. The two previous cases were the 1968 Hong Kong flu and the 2009 new H1N1 flu strain. While border closures and travel restrictions have already dealt a heavy blow to the aviation and tourism industries, the declaration of COVID-19 as a global pandemic has shocked financial markets across the world. The U.S. stock market, in particular, continues to fall, making analysts believe that it is tipping into a bear market now, ending the nation’s longest stock rally that has continued for over ten years since the global financial crisis.

Industries are concerned that the situation will only worsen, as ongoing efforts to contain the virus will inevitably reduce demand and suspend supply chains, while restricting trade considerably. On March 11, U.S. President Donald Trump announced a 30-day ban on travel from European countries as a drastic measure to stem the spread of COVID-19.

With the world facing an unprecedented crisis, research institutes are overly pessimistic about future economic conditions.

Until the initial stage of the COVID-19 outbreak, many analysts predicted that any damage from the virus would be brief. As the virus is spread throughout Asia, the U.S. and Europe, however, concerns are growing that the damage of the pandemic will be more severe than ever before.

Previously, Bloomberg stated that the world economy might lose 2.68 trillion US dollars if COVID-19 turns into a pandemic and global GDP is not restored until the fourth quarter of the year. If that happens, not only Japan and the euro zone but the U.S. may fall into recession. Oxford Economics, a research institution based in London, has lowered its growth outlook for the global economy to 2.0 percent from 2.5 percent.

The Brookings Institution, a U.S.-based think tank, has predicted that if COVID-19 is as bad as the 1918 Spanish flu, global GDP may shrink by 9 trillion dollars.

According to OECD data that analyzed 25 member countries, Korea’s consumer confidence index was 99.6 points last month, down 0.4 points from the previous month, representing the steepest decline among the 25 OECD members.

As a global economic recession is looming large, countries are making an all-out effort to cushion their economies from the shock.

In an emergency move on Sunday, the U.S. Federal Reserve cut its benchmark interest rate by a full percentage point to nearly zero. The European Union has decided to set up a 25-billion-euro fund, while the Bank of England cut its base rate by half a percentage point on March 11. In China, where the virus originated, local governments in seven provinces have announced aggressive investment plans worth 500 billion US dollars for this year. As the global outbreak of COVID-19 is showing signs of taking a heavy toll on production, consumption and finance overall, central banks in countries seem to have decided to adopt strong pump-priming measures to avoid a recession.

The Japanese government has unveiled an emergency plan to unleash 4 billion dollars, and European countries have drawn up their own emergency budgets. Italy, which has become the most virus-affected country in Europe, unveiled a 25-billion-euro rescue plan on March 11.

The Korean government has also proposed a supplementary budget to tackle the impact of the outbreak. As part of efforts to stabilize the local stock market, it introduced a stricter measure against short selling last week.

Stock short selling is a trading technique, in which investors borrow stocks and sell them immediately, in the hopes of making a profit by buying them later at lower prices. They use this strategy in the belief that share prices will fall in the near future. So, the more stock prices fall, the more profit they gain.

The problem is the majority of investors involving in this type of trading in Korea are institutional and offshore investors. Individual investors account for less than 1 percent of short selling. Recently, the Korean stock market saw massive short-selling by foreigners and institutions that expect further decrease in local share prices.

For market stabilization, the financial authorities said last week that new regulations will ease the requirements for designating stocks as “overheated” to make them no longer qualified for short selling. The short-selling ban for designated stocks will be extended to ten trading days from the previous one day.

Due to the rapid growth in short selling by foreign and institutional investors, the average daily short-selling transactions this month more than doubled those of the entire 2019. To reduce the side effects, the government initially said that it would tighten rules on stock short selling for three months from March 11. But the following day, short-selling transactions increased 43.6 percent from the previous day. Foreigners, in particular, continued to make profits through short selling in the bear market. So, the government again decided to impose a ban on short selling of all listed stocks for six months, starting March 16.

Analysts are calling for the government to devise more active and swift measures to effectively cope with the fallout from the virus outbreak.

As Korea relies heavily on exports, it will be hit harder by the global economic crisis than any other country. That’s why Korea must respond to the crisis in a more proactive way. Unfortunately, most experts believe that Korea’s efforts are rather inadequate, in terms of speed and intensity. While central banks in many countries are acting as a relief pitcher amid an economic contraction, the Bank of Korea froze its base interest rate last month. Although a rate cut is widely anticipated in April, calls are rising that the central bank should convene an emergency meeting, just as the U.S. Fed did, to lower the policy rate swiftly. Of course, it is necessary to gauge the side effects of a rate reduction. Given the critical situation, however, many point out that the bank remains much too cautious. I think the government should open state coffers and the central bank should adopt quantitative easing to generate a synergy effect, despite controversy over fiscal soundness.

The COVID-19 outbreak is escalating into a global problem. It seems necessary for major economies to cooperate to come up with simultaneous countermeasures in order to prevent the global economy from sliding into a recession.

Korea should also mobilize all possible means available to ease recession fears and boost the economy.