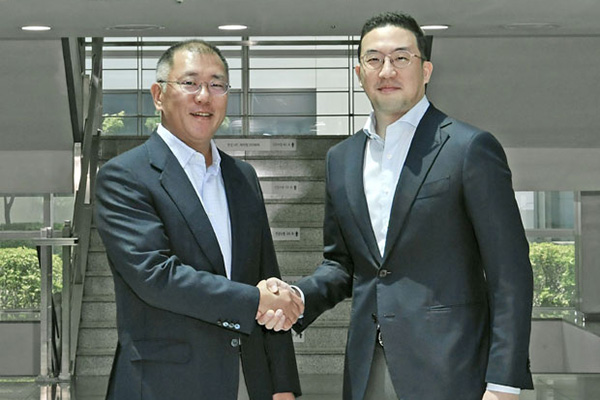 The recent meetings involving the leaders of Hyundai Motor Group, LG and Samsung show that Hyundai is pursuing market dominance in future cars through a battery alliance. Samsung and LG, in particular, have their own business units for vehicles and components, so Hyundai is expected to collaborate further with these companies.

Chung is also expected to meet with SK Group Chairman Chey Tae-won soon. It is unusual for the top management officials from Korea’s four major conglomerates to meet and discuss how to work together on future businesses. Hyundai Motor Group procures car batteries, mostly pouch-type ones, from LG Chem and SK Innovation. But Samsung SDI is not a supplier as its main products are prismatic and cylindrical batteries. That’s why the discussion between Samsung and Hyundai is worth noting.

Of course, Hyundai Motor Group may establish its own battery subsidiary. But it is too late to do so. Rather, it would be better to cooperate with local battery producers that have already secured new technology and global market shares. As the number of electric vehicles is expected to rise in the coming years, batteries will be in short supply. To prepare for the expansion of future cars, Hyundai seeks to secure enough batteries by signing business agreements with several battery makers.

According to the digital industry research company BloombergNEF, EV battery prices were 663 US dollars per kilowatt-hour in 2013 but fell 76.5 percent to 156 dollars last year.

As EV battery prices have fallen year after year, battery producers and car companies are seeking strategic cooperation. The battery business faces low barriers to entry but requires large-scale investment in the early stage. So before the EV market can expand, collaboration with battery suppliers is essential for automakers to survive in the competitive market.

Moreover, Korean battery makers boast world-class technology. Cooperation with the three leading EV battery producers will enable Hyundai to jointly develop and produce the world’s best batteries and also reduce costs. And for battery makers, cooperation with Hyundai could be the key to the future.

Hyundai Motor Group ranks second in the global environmentally friendly vehicle market, but it comes in fourth in electric vehicle sales. It plans on producing four to five types of electric vehicles based on its own EV platform next year alone and more than 20 all-electric models through 2025. The key is, again, batteries. The partnership among Hyundai and the three Korean battery makers will certainly generate synergy. It is also significant that Hyundai Motor Group will raise its status further, with more and more eco-friendly cars including EVs making it on to the market.

At present, Hyundai Motor Group takes fourth place in the global EV market, but the company aims to become one of the world’s top three EV sellers in 2025. The company plans to release 23 fully-electric models and sell one million units by then. Battery manufacturers will be able to secure a stable customer, since such a large amount of vehicles will need batteries. In fact, expanding cooperation between finished car manufacturers and battery suppliers is a global trend.

EV batteries account for 40 percent of the total costs of EV components. So, it will be crucial to produce affordable batteries with high energy capacity. It comes as little surprise that global car companies are working with battery makers for joint development and even setting up joint ventures. For example, Tesla, the No.1 electric car seller known as the icon of innovation, has built a factory in Nevada jointly with Japan’s Panasonic. This is with the purpose of churning out lithium-ion batteries. This type of joint development and distribution is expected to accelerate down the road.

In the past, cars were simply a means of transportation. But in the future automobile industry, high added value will be concentrated in car parts and systems needed for self-driving vehicles and electric cars. In this sense, Hyundai Motor Group’s status in South Korea is extremely high. It has thousands of partner firms, with one out of four of the economically-active population working in relevant fields. The auto industry is all the more significant because it can create new jobs and explore future growth engines. The government will also find it easier to provide financial support to joint business projects between local firms than those involving foreign companies.

The South Korean government has recently announced its plan to spend some 62 billion US dollars on the Korean-style New Deal program by 2025. This in an effort to help the economy recover from the aftermath of the COVID-19 pandemic and to create more jobs.

Cooperation in the battery business will be the center of the so-called Green New Deal, which is included in the Korean New Deal initiative. We’ll have to wait and see if the K-battery alliance will lead to global market leadership.