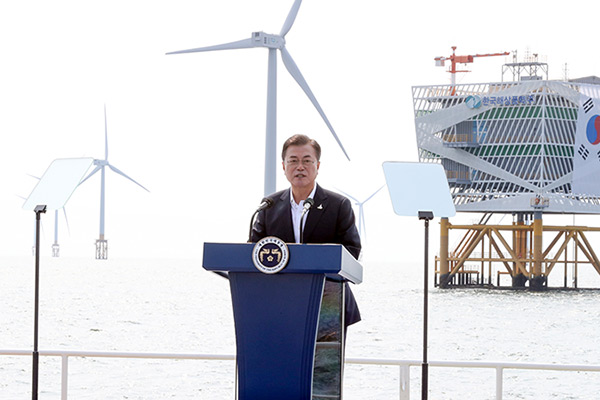 The Moon Jae-in government has unveiled its new stimulus package called the “Korean New Deal.” Under this plan that was announced on July 14, the government will spend 130 billion US dollars with the aim of creating 1.9 million jobs by 2025. Here is Lee In-chul, director of the Real Good Economic Institute, to explain the Korean New Deal initiative in detail.

So far, the Korean economy has grown rapidly by following advanced economies. But the manufacturing-centered economy has now reached growth limits. Also, China is chasing Korea, just as Korea has been running after developed economies. Before long, some Chinese manufacturers will likely outpace Korean ones. For South Korea, now is the time to change its industrial structure quickly. In the post-COVID-19 era, countries are expected to make aggressive investments in future growth engines. South Korea also finds it necessary to nurture new industries and shift its economic paradigm to lift its drastically falling growth rate. To this end, the government has come up with the “New Deal” scheme.

The Korean New Deal is a comprehensive government-led project aimed at exploring new industries and widening the social safety net, much like the U.S.’ New Deal programs against the Great Depression in the 1930s.

In the aftermath of the COVID-19 pandemic, the global community suffers an economic crisis that many consider as serious as the Great Depression. South Korea is no exception. It sees a deeper and more protracted recession, with both shrinking supply and demand. To tackle the crisis, the government has decided to push ahead with its New Deal plan.

For future growth engines that would benefit South Korea for the next 100 years, the government chose digital and green technologies. Under the so-called “Digital New Deal,” it will focus on digital technologies—the core of the fourth industrial revolution in the post-coronavirus era. For that purpose, it will foster data-related industries, artificial intelligence and digital non-contact industries. This is essential to transform South Korea into a “leading economy” from one that has trailed behind others.

The “Green New Deal,” meanwhile, is meant to turn South Korea’s carbon-dependent economy into a low-carbon, eco-friendly one. Under the plan, cities and living infrastructure will be nurtured into those based on green energy, with old buildings on zero-energy. It will also promote green remodeling, green smart schools and future eco-friendly mobility, in which electric and hydrogen vehicles will be distributed. For efficient management, the government will set up smart grids, which is also a huge project.

The Korean New Deal roadmap consists of two pillars—the Digital New Deal and Green New Deal. The government also announced ten specific projects for the Korean New Deal. For example, it will build the so-called “data dam,” so anyone can use more than 140-thousand kinds of public data.

Other projects include the launch of a smart government based on 5G and AI and the promotion of smart medical infrastructure and the renewable energy industry.

The thing is, the development of the fourth industrial revolution may cause problems such as AI replacing human jobs as well as deepening polarization in inequality. The Korean New Deal has measures to resolve those problems.

Typically, inequality deepens in times of crisis. Fewer jobs in the fourth industrial revolution era will be a major problem, and inequality in employment, in particular, may worsen in the future society.

The Korean New Deal seeks to strengthen the social safety net in a preemptive move to ease inequality in employment. It will expand the employment insurance coverage to freelancers and workers in special types of work. The government plans to enable all South Koreans to enjoy a basic standard living from 2022 and to run a pilot program that year to introduce sickness benefits. For the safety net improvement, the government will spend 25 billion US dollars and create 339-thousand new jobs.

In short, the Korean New Deal is divided into the Digital New Deal and Green New Deal, which will be upheld by a reinforced social and employment safety net. The goal is to turn South Korea from a chaser into a pacesetting nation, from a fossil fuel-reliant economy into an eco-friendly one, and from an unequal society to an inclusive one. This grand project, when implemented, will bring about a major paradigm shift in South Korea.

When the Korean New Deal is completed, 40 percent of local companies will adopt the working-from-home system, and 1.33 million electric and hydrogen cars will be running on the roads.

Public facilities will be more energy efficient. The Korean-version New Deal will help remove fears over unemployment and eliminate blind spots in the welfare system. The number of employment insurance subscribers will be expanded from the current 13 million to 21 million by 2025. When the Internet network is built in all rural areas, seven out of 10 people over the age of 70 will be able to use the Internet via mobile devices.

The Korean New Deal is a new centennial blueprint drawn by the government. It will be up to the citizens, companies and the government to decide how to paint or decorate it.

By the year 2025, when the New Deal plan is complete, people won’t have to go out when they get documents, take school classes or receive medical treatment. They can enjoy their hobbies, like going to exhibitions, by using their computers. Machines will take care of road control as well as accidents like train derailments. Environmentally-friendly vehicles such as electric and hydrogen vehicles will be found on the roads, and South Korea will be able to cope with the climate crisis in a proactive way. The government expects that 1.9 million jobs will be generated in the process. It is a very positive development, considering that nearly 400-thousand jobs have disappeared in the past year due to low growth and the COVID-19 crisis. On the flip side, though, the huge project has some major tasks to contend with.

The plan is not without worries. First, many point out that the initiative is nothing new, questioning its effectiveness. Second, it is uncertain whether the long-term program will be carried out in a stable manner even after May 2022, when the term of the current administration ends. Third, it requires a massive budget. The budget proposal for the project more than doubled from the initial 63 billion dollars, raising concerns over the nation’s fiscal soundness. The government has not explained exactly how to secure the necessary fund.

In fact, the government unveiled stimulus plans whenever the economy faced a crisis. The latest plan should not end up being just a slogan, if the government wants it to contribute to changing the fundamentals of the South Korean economy. It seems necessary for the government to ponder over more specific measures to produce a tangible outcome from the plan.