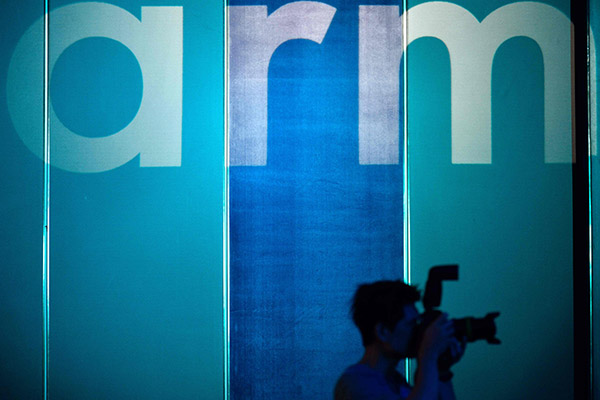 U.S.-based graphic chip maker Nvidia has announced that it will acquire Arm, a global leader in chip design. As “the deal of the century” in the global semiconductor industry, the 40-billion-dollar contract will create a new giant in the industry. Faced with the seismic change in the semiconductor industry, Korean chipmakers now have complicated calculations. Here is Kim Gwang-seok at the Institute for Korean Economy and Industry to examine the volatile semiconductor market and its potential influence on Korean companies.

Nvidia says it has signed a contract with SoftBank to acquire the latter’s chip-design company, Arm, worth 40 billion US dollars. Under the deal, Nvidia will pay Softbank 21.5 billion dollars in shares and 12 billion dollars in cash. This is the largest deal in the merger and acquisition history of the semiconductor industry. In 2016, Softank bought Arm for 32 billion dollars in the biggest tech deal up to that time. But Nvidia’s 40-billion-dollar acquisition of Arm has now broken that record.

Founded in 1990, British chip tech firm Arm designs the technology that is at the heart of semiconductors and receives royalties for each chip sold. It accounts for 95 percent of global mobile application processors or APs used for smartphones. Currently, some 1,000 companies including Samsung Electronics, Apple and Qualcomm pay royalties to Arm. The Arm acquisition, once realized, will turn Nvidia into the most powerful semiconductor company in the world.

Nvidia is the world’s leading graphics processing unit or GPU producer. With the Arm acquisition, Nvidia will be able to move beyond the GPU market and expand its presence in the AI, IoT and datacenter central processing unit or CPU markets.

Arm has maintained its neutrality when doing business with semiconductor firms. Nvidia says that it will retain Arm’s open-licensing business model and global customer neutrality. But Nvidia may change the neutral stance and raise royalties. It may not provide Arm’s designs to particular companies. Without Arm’s basic designs, it will take a lot longer to develop semiconductors for smartphones. Chipmakers, including South Korean ones, may take measures to reduce their dependence on Arm.

The acquisition means that Arm will now belong to Nvidia, which competes with Apple and Qualcomm. Nvidia is a company based in the U.S., which has engaged in a fierce trade war with China. For these reasons, there are concerns over Arm being acquired by Nvidia.

Korean semiconductor manufacturers like Samsung Electronics and SK Hynix are also paying close attention to the acquisition. For Samsung, potential risks may not be very high, as Arm is not acquired by its rival Apple. Also, Nvidia and Samsung are now partners, thanks to their recent contract of GPU production. Over the long term, however, Nvidia could be a strong competitor of Korean companies, as it is seeking to expand market access in mobile areas overall, not just the GPU market.

Samsung Electronics and SK Hynix are the two leaders of the global memory chip market. But they may have a sense of fear when they see a new industry-changing behemoth, capable of designing and producing semiconductors for computers and mobile devices on its own. After all, they have to sharpen their price and quality competitiveness even further. As South Korea depends heavily on Japan in terms of semiconductor production, Korean firms will find it quite challenging to compete with Nvidia. If Arm provides its designs only in a limited way or raises prices of mobile AP licenses, global chipmakers will inevitably lose their price competitiveness.

Meanwhile, the U.S. began to impose additional sanctions on Chinese tech firm Huawei on September 15. Under the sanctions, semiconductor companies cannot supply Huawei with chips made with U.S. technology, equipment or software without prior approval of the U.S. government.

Samsung Electronics and SK Hynix earned 3.2 percent and 11.4 percent, respectively, of their semiconductor revenue from exports to Huawei last year. If the sanctions against Huawei are drawn out, the two Korean companies may suffer a huge loss, as their combined chip orders worth 9 billion dollars came solely from Huawei last year.

Semiconductors account for about 20 percent of Korea’s total exports. That is, the semiconductor industry has great influence on the country’s outbound shipments. This important industry has major clients, including Huawei. Unfortunately, non-U.S. companies are now restricted from selling Huawei any chip parts developed with U.S. technology. That means Korean semiconductor manufacturers may lose a major client, and this will deal a direct blow to Korean exports.

China, for its part, will actively invite South Korean experts in chip design and production in order to secure semiconductors in a stable and independent way. In the process, South Korea could be embroiled in conflict with China or the U.S. It’s not only a matter of exports or the economy but of political dispute.

Following Washington’s imposition of sanctions on Huawei, there have been signs of a downward adjustment to prices for server DRAM chips. Some predict that DRAM prices may fall up to 18 percent in the fourth quarter from the previous quarter. If that happens, Samsung Electronics and SK Hynix will find it difficult to improve their performance in the second half of the year. It will inevitably hurt Korea’s exports as well. It seems urgent to prepare for countermeasures.

Recent major events in the semiconductor industry have spawned political controversy. That is because sanctions on Huawei have to do with conflict between the U.S. and China, while Nvidia’s acquisition of Arm means the British firm will be a subsidiary of the American company.

Stuck between world powers, Korea could be forced to make difficult decisions. For Korean chipmakers, the recent developments in the global semiconductor market could be a crisis but also an opportunity.