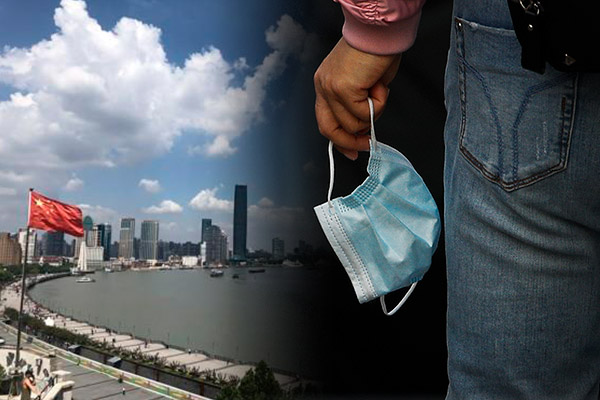 The Chinese economy is back on track after derailing for some time in the aftermath of the COVID-19 pandemic. In the third quarter, it grew even faster than the previous quarter, indicating a sharp V-shaped recovery from the novel coronavirus shock. This is a remarkable rebound, considering that the virus originated in China. Here’s Cho Yong-chan, director of the America China Economic Research Institute, to explain China’s quick economic recovery and its influence on the Korean economy.

China’s GDP grew 4.9 percent in the third quarter year-on-year, up from the previous quarter’s growth of 3.2 percent. The two consecutive quarters of positive growth show that the Chinese economy has completely recovered from the COVID-19 shock. The country’s GDP grew a cumulative 0.7 percent in the first three quarters this year, compared to the same period of last year. While other major economies still remain in the negative territory of growth, China has achieved a V-shaped rebound, which I think is significant.

British think tank Capital Economics says that China is unique among major economies in having returned to its pre-virus level of growth.

This is thanks to the government’s swift response to the epidemic and effective stimulus measures. China’s output, investment and exports have all performed favorably. Even sluggish consumption has been revived for two consecutive months. During the Golden Week period early this month, as many as 637 million people traveled within China. During the eight-day period, the nation’s tourism revenue amounted to 69.7 billion US dollars and sales at key retail and catering enterprises reached 238 billion dollars. On the back of the encouraging signs, China’s fourth-quarter growth rate is forecast to surpass 5 or even 6 percent.

China suffered a direct hit from the COVID-19 outbreak, with its economy contracting 6.8 percent in the first quarter. It was the first decline since 1992 when the nation began to compile quarterly growth data. The downtrend didn’t last long, though. The Chinese economy grew 3.2 percent in the second quarter and nearly 5 percent in the July to September period to firmly establish a V-shaped rebound. Its cumulative growth for 2020 is now in the black.

In the first three months of this year, China enforced lockdowns in some regions to prevent the spread of COVID-19. But it reactivated factories in the second quarter to restore production and focused on reinvigorating domestic spending in the third quarter to eventually escape from the COVID-19 tunnel.

In its latest report in October, the International Monetary Fund predicts that China will be the only major economy to achieve positive growth this year. It forecasts that the economy will grow 1.9 percent this year and 8.2 percent in 2021. Consumption, in particular, is showing signs of recovery. As a result of the government’s aggressive measures to boost spending, retail sales in September increased by 3.3 percent year-on-year. They are expected to rise more in October.  2021 is the first year of the nation’s 14th Five-Year Plan. China will likely see an increase in investment and industrial output next year to serve as the growth engine of the global economy.

China’s growth momentum has fueled a strong yuan trend in the foreign exchange market. The Korean won is also appreciating against the dollar in tandem with the rise in the value of the Chinese yuan’s, given close economic relations between the two countries. China’s strong signs of an economic rebound are expected to have a positive impact on the Korean economy.

China’s quick recovery is a good sign for the Korean economy. South Korean companies exporting automobiles, electronic parts and cosmetics to China will be able to restore their export competitiveness quickly. It is reported that China will invest 1.6 trillion US dollars in high-tech areas, such as semiconductors, artificial intelligence, big data and the Internet of Things, to become a global manufacturing powerhouse. China imports semiconductors worth 300 billion dollars each year. Korean manufacturers of chips and display products will definitely benefit from this.

A survey on Korean companies doing business in China shows that their business survey index for sales outlook in the third quarter reached the highest level in two years. With an improvement in the business environment in the country, the index is expected to rise further in the fourth quarter.

While the Chinese economy is picking up the pace, concerns over a double-dip recession are rising in the U.S. and Europe, where COVID-19 is spreading again. Many countries across Europe have closed their doors, and the situation in the U.S. is not good, either. Due to a delay in negotiations between the White House and the Democratic Party over a COVID-19 relief plan, Goldman Sachs and Bank of America have revised their fourth-quarter growth forecasts downward for the U.S. economy.

It is true that China’s economic recovery is good news for the Korean economy. But the risks of the resurgence of COVID-19 in the U.S. and Europe pose great uncertainties to the global economy.

Whether Korea will achieve a full economic recovery depends on how quickly the COVID-19 situation stabilizes in the U.S. and Europe. According to the Korea Economic Research Institute’s analysis based on OECD data, a 1 percentage-point drop in China’s annual GDP growth will cause Korea’s growth to slow 0.4 percentage points. Perhaps, the U.S. economy will have a similar impact on the Korean economy.

Korea faces a number of downside risks stemming from unfavorable external factors. The global economy is in a recession, and many countries have sealed off their borders to prevent the spread of COVID-19. It is uncertain whether if and how the U.S. will take massive stimulus steps after the presidential election.

Also, the U.S. will feel uncomfortable about the fact that China is the only country to enjoy an economic recovery. There are worries that their trade conflict will deepen further. This is another negative factor that may affect the Korean economy.

South Korea is under pressure amid the tension between its traditional security ally, the U.S., and its largest trading partner, China. If Korea maintains an ambiguous attitude, the U.S. may impose higher tariffs on Korean goods, including automobiles bound for the U.S.  It may also pressure Korea to join the U.S.-led global missile defense network. South Korea could be sidelined in negotiations over North Korea’s nuclear issue.

China, for its part, may consider restricting exports of rare earth minerals to South Korea or make military provocations on the West Sea between Korea and China. South Korea previously suffered retaliation from China for the deployment of the U.S.-led Terminal High Altitude Area Defense or THAAD anti-missile system. If South Korea sides with the U.S., a second THAAD dispute may erupt.

South Korea should not make enemies for its national interest. The government needs to find a strategy to communicate with world powers, while companies must devise Plan B quickly in preparation for the worst-case scenario. Without any clear national strategy, companies refrain from new investment, technical cooperation, research and development investment, market expansion and employment. Instead, they simply take a wait-and-see attitude. For now, it’s important for the government to present a national goal and vision.

China’s economic recovery is gaining steam, while fears are mounting that the U.S. and European economies may slip into a double-dip recession. The Korean economy will also likely face both bright and dark sides of the global economy. It is urgent for Korea to come up with appropriate measures to manage its economy in a more stable way.