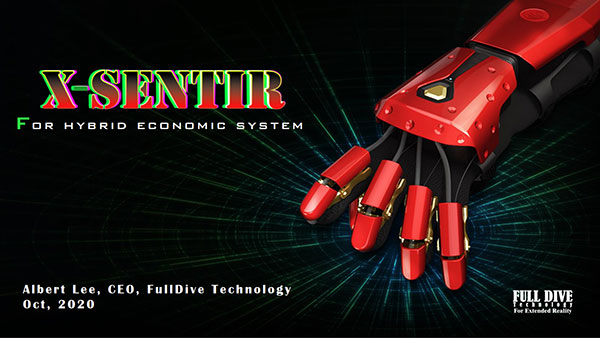 Full Dive Technology was established in June 2016. At the time, head-mounted displays, which are generally used in VR, began to hit the market, but they only presented visual and auditory sensations. I decided to set up a hardware company, in the belief that this industry, which has huge potential, would continue to develop.

Today, thousands of VR games are released around the world daily, while far more games for smartphones are poured out each day. That’s why it is challenging to create so-called “killer content” in the gaming industry. When it comes to hardware, in contrast, it may take time to manufacture it but it could be used in a wide range of areas. I chose to develop hardware, in consideration of its high residual value, although things might be pretty hard at the beginning.

Among VR and AR companies in Korea, Full Dive Technology definitely stands out because it is dedicated to developing hardware, not software. At present, the company focuses on haptic gloves that bring realistic touch, in addition to visual and aural perceptions, to VR and AR to make the user experience more immersive.

Haptic gloves are also used for education, experiments and practice. They have drawn greater attention in this era of COVID-19, which triggered social distancing, working from home and online learning. Restrictions in movements and gatherings have led to the growing demand for non-face-to-face services and experiences with high-degree immersion. 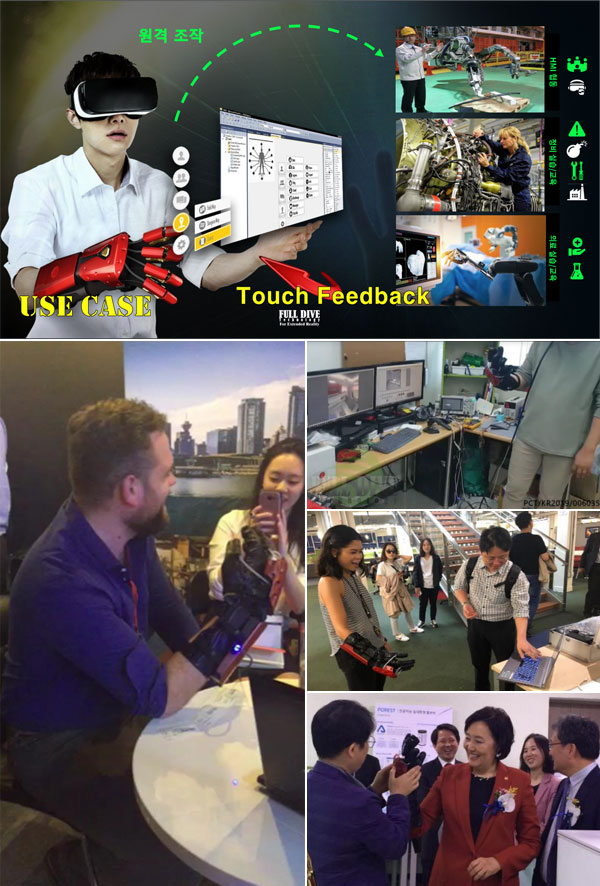 In the past, office workers would go to the office on time, do their work, report to their boss and get off work at a designated time. That was their daily routine. But the COVID-19 pandemic has caused a major disruption in economic activities like this. A new economic system is emerging in the U.S.  In the so-called “hybrid economic system,” people can work online, regardless of time and place. It’s not important where they are, as long as they can perform their jobs. Now, people can engage in production and industrial activities more effectively through this hybrid economic system, which is widely embraced by the IT industry. I think our products will enable other industries to implement the system.

In the wake of the COVID-19 outbreak, workplaces have undergone a rapid transition to a hybrid work model characterized by the mixture of office work and working from home, of virtual reality and fieldwork, and of online and offline sites. Full Dive Technology is filling up the gap between the different domains.

The gloves developed by the company can create the sense of touch in VR, though in a limited way. In other words, the haptic gloves enable users to “touch” the VR worlds—the feature that was hard to find in previous VR devices. This technology is useful for practice for educational purposes, training for soldiers and firefighters, and manufacturers, in particular.

Experiencing the VR world through five senses, including touch, will make users feel as if they were in the real world. I think haptic technology can enrich users’ VR experience by delivering deeper immersion. Through the technology, many industries, other than the IT sector, can introduce the new hybrid economic system.

Even those working in the manufacturing sector may operate factories at home, like controlling a machine. Our haptic gloves are extremely accurate. It can even measure the subtle shaking of a finger.

Haptic technology allows users to feel the volume, hardness, pain and force feedback in VR. Force feedback refers to the ability of virtual objects to push back against users’ fingers. The multiplicity of haptic sensations can create high-immersion VR experiences. Full Dive Technology can deliver all these four sensations, while its foreign rivals mostly offer one or two.

Our product can deliver force feedback, which is the simulation of real-world physical touch. It can create the sensation of grabbing virtual objects that do not actually exist physically. The haptic gloves can also deliver the sense of pain and a tickling sensation. In addition, users can feel the texture of the surface of a virtual object. Typically, the texture can be felt by a frictional stimulus. But our technology allows users to feel the texture when they simply touch something.

On the back of its solid technology, the company has secured 16 patents and has drawn investment both from Korea and abroad. Nevertheless, CEO Lee says it is still difficult to run the business, due to the local industry environment that has not improved much.

The world’s VR and AR market is expected to reach 108 billion US dollars in 2021 and shoot up to 1.5 trillion dollars in 2030. Yet, the Korean VR and AR market is still underdeveloped, raising concerns that the market might be dominated by global firms. Hardware comprises the most important element in the establishment of the ecosystem of the industry, but Korea is weak in this area. That’s why Full Dive Technology is struggling to stay afloat. It’s somewhat fortunate that the Korean government unveiled its plan in August to ease regulations concerning the VR and AR industry.

At first, I had no intention of developing hardware, since I was a content developer. I simply thought I could import foreign products and sell them locally. But it came to me that Korea’s technology and manpower were strong enough to develop hardware. I decided to bite the bullet and worked really hard. In four years, we grew into a hardware developer. My goal is to make Full Dive Technology gain worldwide recognition, just as Samsung is. Our technology, if and when commercialized, will create a new dimension in VR experiences. We hope to showcase our abilities in this endlessly expandable industry.

Analysts point out the need to focus on the VR and AR market in preparation for the post-semiconductor and post-smartphone era. In 2020, Korea proved to be a very strong player in the semiconductor field. We hope that the country will also lead the global electric vehicle battery market in 2025 and the VR and AR market in 2030, with Full Dive Technology playing a key role in the process.