Potential Impact of RCEP on the Korean Economy 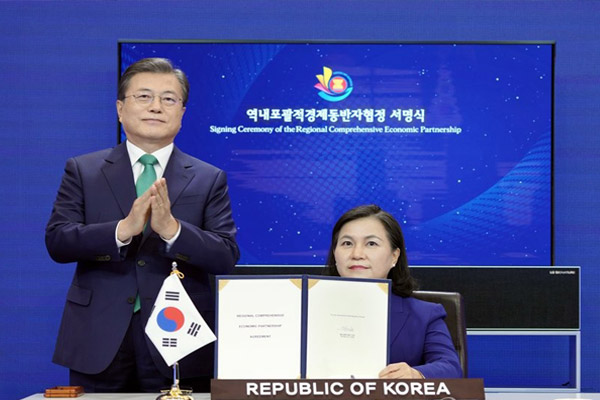 South Korean President Moon Jae-in signed the final agreement on the Regional Comprehensive Economic Partnership or RCEP at a virtual summit with other leaders on Sunday.

RCEP consists of 15 countries such as South Korea, China, Japan, Australia, New Zealand and ten member states of the Association of Southeast Asian Nations or ASEAN. Even without India’s participation, it is still the world’s largest free trade agreement covering 2.6 billion people or one-third of the world population, with a total trade value of over 10 trillion US dollars. The mega economic bloc is even larger than other trading blocs such as the European Union and North American Free Trade Agreement.

For the Korean economy, the new development is expected to create more business opportunities. Here is Kim Dae-ho, director of the Global Economic Research Institute, to explain.

The launch of RCEP will provide momentum for Asia to stand high on the global stage, as its members will seek common prosperity through free trade.

South Korean President Moon Jae-in has pushed for his New Southern Policy, which seeks to strengthen ties with ASEAN and other countries southwest of South Korea. In the process, Korea has expanded economic exchanges with each country. But now, countries within one big economic bloc will be able to increase their trade considerably without going through the time-consuming process. The new mega FTA will provide a huge opportunity for Korea to expand its economic territory.

The U.S. presidential election is over, but the global economy is unlikely to get over trade protectionism anytime soon. In this situation, expectations are running high for RCEP, the world’s largest FTA.

The pact will apply the latest trade regulations on the place of origin and intellectual property rights as well as market access on goods, service and investment in RCEP members. They will benefit from reduced tariffs, of course. What is better is that goods produced in countries within RCEP will be entitled to preferential tariffs. That means Korean production bases in the member countries will have a competitive edge. We also have to note that many of RCEP participants have been swept by the Korean pop culture boom known as hallyu. In those countries, intellectual property for hallyu content will be better protected, as the new trade deal calls for strengthening intellectual property protection.

Korea’s exports have been struggling since the inauguration of U.S. President Donald Trump, due to trade protectionism. But Korea will now be able to export to 15 countries without trade barriers. This is good news for Korea, which relies heavily on trade. According to the Korea Economic Research Institute, the official launch of RCEP is estimated to add an annual average of 1.1 percent to Korea’s GDP and 1.1 billion US dollars in consumer welfare.

RCEP has laid the groundwork for the conclusion of an FTA among South Korea, China and Japan, as the three countries have all joined RCEP.

In another positive development, South Korea and Japan, which have been at odds over the latter’s export restrictions against the former, will now use a multilateral dialogue channel. In fact, Korea has already inked an FTA with all RCEP members, except Japan. Korea and Japan started FTA negotiations in 2003, but the talks were suspended the following year, due to concerns over possible damage to the Korean industry as a result of market opening. Now, RCEP will bring Korea and Japan together within a single free trade zone.

Thanks to the RCEP agreement, Korea will be able to export its products to Japan with lower tariffs, while Japan will find it easier to access the Korean market. This will boost trade between the two countries, although the effect may not be as great as that of a bilateral FTA.

Korea is less competitive than Japan in materials, parts and equipment. So, imports of those products from Japan may prove disadvantageous for Korea. Also, some of Japanese agricultural and fisheries products are highly competitive. Korea should note these as well. Other than tariffs, Korea has to tackle non-tariff barriers when exporting its goods to Japan. For example, Japanese people are reluctant to buy Korean products. Sales of Korean cars in Japan are extremely low, compared to those in other countries. While non-tariff barriers make it difficult for Korea to explore the Japanese market, Japanese products, if they enter Korea tariff-free or at low tariff rates, may dominate the Korean market on the back of their price competitiveness. Korea needs to prepare for measures to remove the non-tariff barriers.

RCEP members include agricultural powerhouses such as China. There are concerns that RCEP may deal a blow to Korea’s relatively uncompetitive agricultural and fisheries industries, which are vulnerable to market opening.

For Korea, another problem is that RCEP is, in effect, now led by China.

When Biden served as Barack Obama’s vice president, the U.S. government pushed for the conclusion of the Trans-Pacific Partnership or TPP. But it never went into effect because Trump refused to sign it.

Now, with the U.S. leadership transition looming, RCEP has been concluded. Biden might be wary of the possibility of China’s supremacy over Asia, a populous region with huge growth potential. Biden may also be unhappy about South Korea as he may believe that the ally of the U.S. is leaning toward China. When Biden visited South Korea in 2013 as vice president, he warned then-South Korean president Park Geun-hye not to take China’s side. Many experts are concerned that South Korea might be estranged from the U.S. in the course of getting closer to China.

Since the withdrawal of the U.S., the TPP has remained as a trade agreement among 11 countries including Japan, Canada and Australia. South Korea is not included in the pact. If the incoming Biden government pressures South Korea to join it in a move to develop the U.S.-led TPP as an economic bloc to confront the China-led RCEP, Korea will find it difficult to refuse it. For Korea, it will be increasingly challenging to strike a balance between the U.S. and China.

South Korea could be forced to choose between China and the U.S.  Many other countries are in a similarly tricky situation. While the world’s two superpowers are engaging in a battle for hegemony, South Korea should sharpen its industrial and technological competitiveness.

As a signatory to RCEP, South Korea needs to consider how to respond to Washington’s possible request to join the TPP. Many experts advise South Korea to re-examine its “strategic ambiguity” in the U.S.-China competition. They also point out the possibility of South Korea’s deeper economic dependence on China, as the launch of RCEP could mean that the Asian economy will be reorganized in a way to strengthen China’s influence.

Korea faces a critical challenge. Both the private and public sectors should put their heads together to find the best possible solution.