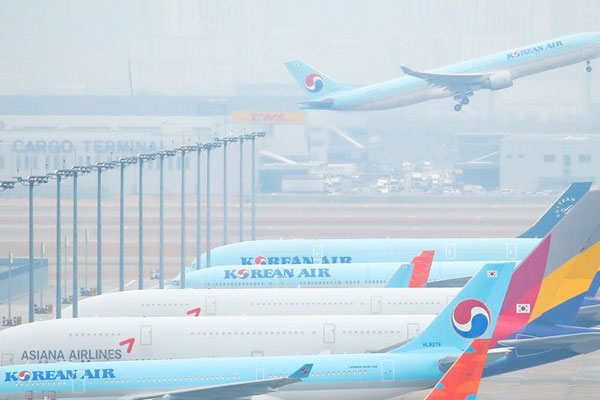 Korean Air Lines, the country’s largest carrier, will acquire its smaller domestic rival, Asiana Airlines, with support from a government-owned bank. With the merger, the era of Korea’s two flag carriers will come to an end, 32 years after the launch of Asiana Airlines in 1988.

The decision was made amid deepening financial difficulties in Asiana Airlines. Previously, a deal to sell the cash-strapped airline fell apart, although the government had provided some 2.6 billion US dollars for the nation’s No. 2 carrier. With the aviation industry reeling from the prolonged fallout of the COVID-19 pandemic, there are both expectations and concerns about the high-profile acquisition deal. Here’s Lee In-chul, director of the Real Good Economic Institute.

The integration of the top two Korean carriers will lead to the birth of a mega flag carrier, ranking seventh in the world. As of last year, Korean Air had revenue of 11 billion US dollars and Asiana Airlines, 6.2 billion dollars. Their combined assets are estimated at about 36 billion US dollars. The merger will enable the new Korean airline to join the ranks of the global top 10, in terms of capacity to transport passengers. It will become the world’s third-largest carrier in terms of cargo delivery, edging out Cathay Pacific. According to the Korea Development Bank, which is the major creditor to both Korean Air and Asiana Airlines, the decision was made to strengthen the competitiveness of the local aviation industry. Hanjin Group, the owner of Korean Air, hopes to take over Asiana Airlines within one or two years once the acquisition process is complete by the second half of next year.

For the planned acquisition, the state-run Korea Development Bank or KDB will inject about 715 million dollars into Hanjin KAL, the parent company of Korean Air. Hanjin KAL will participate in a stock sale by Korean Air, which will then use some 1.6 billion dollars of the newly raised capital to become the biggest shareholder of Asiana Airlines. The result of the three-stage deal will be the formation of a single, mega flag carrier.

Many analysts predict that the integrated airline will be able to secure a competitive edge in the global market by using the advantages of economy of scale. Korean Air and Asiana have as many as 48 overlapping flight routes. Reducing the redundant routes and expanding profitable ones will make management more efficient. The new airline can also unify systems for aircraft maintenance and pilot education to save costs. Customer benefits could be improved when travel routes are adjusted and their mileage points are integrated. In fact, countries with populations of under 100 million generally have one large flag carrier. Considering that some advanced economies such as Germany, France and Singapore operate one mega carrier, the merger of the two Korean full-service carriers will prove advantageous in some ways.

But it is too early to paint a rosy outlook on the acquisition. Asiana has already used up 2.9 billion dollars injected by the KDB and the Export-Import Bank of Korea. The state banks have also provided Korean Air with 1 billion dollars in loans, reflecting the situation in Korean Air is not very good, either.

If the integrated airline fails to normalize management, the public will criticize the government’s financing of the deal, calling it an act of filling a bottomless vessel.

But the government had some reasons to make this decision.

Following the collapse of a deal to acquire Asiana by Hyundai Development Company, the government desperately looked for a new owner of the airline, only to fail. Hanjin Group was the only business that showed interest in the acquisition. The state-owned KDB has poured out taxpayers’ money to both airlines. It may have concluded that it would be more effective to spend funds in an integrated company so the flag carrier can be saved and taxpayers’ money will not be wasted.

If the two airlines continue to operate business separately, the government thought it should spend 4.3 billion dollars in the local aviation industry until the end of next year. The government was concerned that the two companies would engage in a fierce competition for declining travel demand and end up facing difficulties together. It believed it would be better to reshape the industry through a large-scale merger and acquisition.

However, it is uncertain how long the pandemic will last, with demand for air travel decreasing all around the world. Given the situation, there are concerns that the merger may not produce its intended effect. Also, some point out that financing the acquisition with government money will only deteriorate corporate management.

Korean Air has a debt ratio exceeding 1,000 percent, while Asiana Airlines, over 2,200 percent. Asiana’s capital impairment rate was 56 percent in the second quarter of this year. If the rate remains above 50 percent until the end of the year, the company will be placed under the watch list by the stock operator. If the erosion rate of a listed firm stays above 50 percent for two consecutive years, it can be delisted.

Both Korean Air and Asiana Airlines have narrowly escaped running a deficit by securing more cargo delivery deals to offset a decline in travel demand. Still, sales from passenger flights have nosedived more than 90 percent. The takeover of the debt-ridden Asiana will pose a significant burden on Korean Air.

Conflict over the management of Hanjin Group is another factor that may negatively affect the acquisition. Hanjin Group Chairman Cho Won-tae is involved in a management dispute with the three-party alliance, which includes a private fund called Korea Corporate Governance Improvement. The fund has filed an injunction against Hanjin KAL’s issuance of new shares in the acquisition process. If the court upholds the injunction, the acquisition deal may fall through.

Also, the deal is expected to draw a backlash from the two airlines’ labor unions, which are opposed to layoffs in the wake of the M&A. Korean Air, Asiana Airlines and their budget carriers together accounted for more than 60 percent of the domestic airline industry last year. This may give rise to monopoly concerns, which are another stumbling block in the way of the deal.

In Korea’s saturated aviation market, the integration of the two biggest airlines will require industrial restructuring and efficient management. It is highly important whether the aviation industry will stay competitive. The merger should produce the synergy effect and the new airline should raise its competitiveness so it will be included in the global top nine in terms of passenger traffic. Some say that this aviation deal should not repeat the fate of the failed merger of Hanjin Shipping and Hyundai Merchant Marine, as the failure hurt the backbone of the local shipping industry. The Korean airline industry should use this deal as an opportunity to rationalize the industry and take the lead in the global competition.

The acquisition deal is seen as the government’s desperate measure to save the airline industry in crisis.

If the past is any guide, some companies took over insolvent businesses in the same industry to be reborn as competent global firms. These positive examples include Hyundai Motor and its affiliate Kia Motors and KB Financial Group.

The government and the airline industry should hopefully turn this seemingly inevitable choice into the best possible decision.