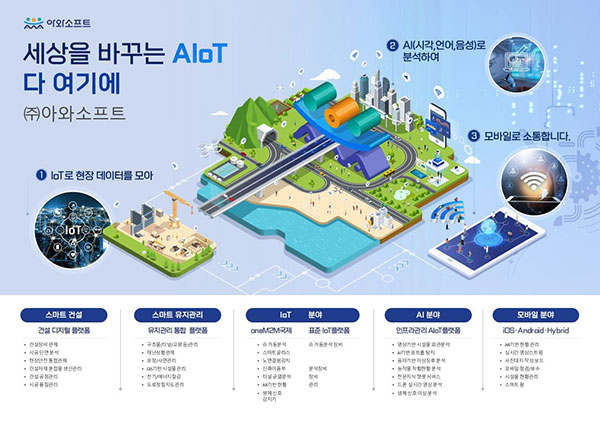 The company we’re going to introduce today is Awasoft, a developer of public facility monitoring solutions. Let’s hear from Kim Jae-hyun, director of the research institute of the company.

Established in August 2003, Awasoft has worked on the management of roads, private highways and electric facilities. The company has also built a disaster management system and a tunnel remote-monitoring system. It has expanded its business to the IoT area as well as mobile maintenance related to the Korea Express Corporation. The company has produced its own tunnel monitoring equipment and IoT-based gateway equipment, which can be used for facility monitoring and management.

Artificial intelligence or AI has already been used in a wide range of areas in daily life. It is easy to find smart refrigerators and washing machines with AI capabilities. AI even recommends music or wine that suits your taste. AI is also used in various industries, including manufacturing, logistics, finance and infrastructure safety checks as well. Thorough management of public facilities such as roads, bridges and tunnels is closely related to the safety of the people, as neglecting safety management may cause a major disaster.

Led by CEO Kim Yang-su, Awasoft has been developing infrastructure safety check solutions for nearly 20 years since the foundation of the company in 2003. The firm’s latest solutions using advanced technology such as AI and IoT have drawn special attention from the industry.

As seen in a Korean movie titled “Tunnel,” public facilities may collapse and disasters may occur anytime, anywhere. For state-run facilities, safety checks are conducted every year to prevent an accident or disaster in advance. But in most cases, inspections are done physically, just with the naked eye, and the result is recorded manually in the office. For a more efficient inspection process, we’ve created an automated system that collects infrastructure images through vehicles or drones, detects any crack or damage using AI technology and prints the inspection result in the form of computer-aided design or CAD.

Previous inspection methods, which rely on human workers, are prone to safety accidents. A shortage of manpower is another problem. To resolve the shortcomings, Awasoft developed mobile equipment capable of taking pictures of a tunnel and analyzing the result. A scanner taking photos of tunnel walls and ceilings is mounted on a vehicle. While the vehicle runs inside the tunnel at a speed of 50 kilometers per hour, deep learning-based AI analyzes the images to detect any crack or flaw. Compared to existing methods, this solution is less time-consuming and more accurate. It is cost effective as well, because it does not need many human inspectors.

In the case of manual safety checks, it is difficult to manage the facilities as their history is not recorded digitally. Data collected in the form of images, on the other hand, are accumulated as a kind of asset, so they are useful for the efficient management of facilities and for future budget allocations as well.

The company is working to make the equipment smaller and automatic so it can be used in various structures other than tunnels, such as buildings, railroads and bridges.

The equipment installed on a vehicle gets the images of a structure and the images are analyzed to produce a result. It was developed for tunnel inspections, but we’re in the process of miniaturizing it and making it automatic so it can also take photos of underground utility-pipe conduits and small sewer pipes. We believe that a smaller, lighter device mounted on a drone can check other facilities including bridge substructures, small culverts and drains.

A customer service chatbot is typically used to answer customer questions. Awasoft developed a chatbot that can be used in construction sites, where companies from diverse fields including design, construction and supervision need to communicate with one another. For that purpose, they hold meetings frequently and deal with a lot of data. Awasoft’s new chatbot is expected to ease the inconvenience significantly.

In addition to construction, the company incorporated AI technology into various other areas to expand its business scope.

Our AI-powered bio signal analysis solution is called “In-ear bio signal detector.” It uses the optical transceiver module technology, which transmits detected bio signals to a smart monitoring system. Based on the AI analysis of collected data, the device is mainly for disabled people and critically ill patients. Patients who lie on the bed and have mobility difficulties usually have bio signal-detecting devices attached to their wrists or chests. The corded medical devices are rather inconvenient, though. Our “In-ear bio signal detector” is placed inside the ear to measure and analyze bio signals such as the body temperature, the heart rate and oxygen saturation to treat patients in critical conditions in a more effective and convenient way.

In addition, Awasoft’s AI integration platform called “AI Dream” enables anyone to learn about AI easily and use it in many different areas. The company has also developed a variety of facility management solutions, including the greenhouse gas energy management system and the smart farm. It is preparing to explore foreign markets, moving beyond Korea.

We’ve adopted technologies of the fourth industrial revolution, such as AI and IoT, to provide solutions needed to operate state infrastructure. We’re sure that we have the longest business history, made the greatest achievement and boast the most advanced technology in the domestic infrastructure management system market. Our fellow workers have made the company what it is today and they will continue to inspire the company to become what it will be in the future. We put top priority on creating a favorable environment, where the employees can fulfill their dreams. We hope that the name of Awasoft will shine not only in Korea but in the global market as well.

South Korea built social infrastructure quickly in the 1970s and the ‘80s, when the country enjoyed high growth. Facilities built during the period have now become outdated, and it is becoming increasingly important to manage the facilities in a proper way. Using AI-based high technology, Awasoft contributes to ensuring the safety of social infrastructure and the general public.