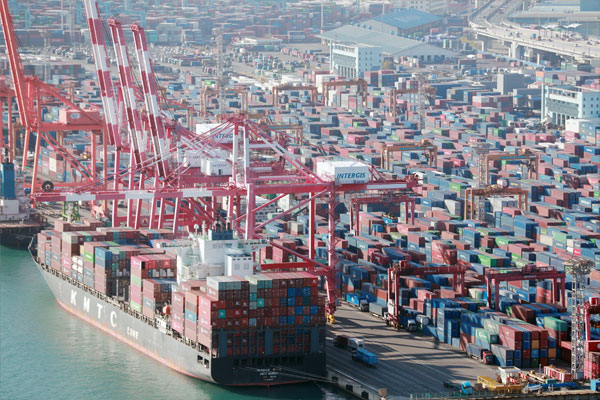 South Korea’s annual trade volume has exceeded 1 trillion US dollars within the shortest period of time. 1 trillion dollars is the price of about 50 million cars. Considering that the number of cars registered in Korea stands at 24.7 million, exports of all those cars and imports of the same amount would be equivalent to 1 trillion dollars.

Here is Bae Min-geun, researcher at the LG Economic Research Institute, to discuss the implications of Korea’s major achievement in trade, despite the ongoing COVID-19 pandemic.

In 2011, South Korea became the ninth country in the world to surpass 1 trillion dollars in trade. It was also the only country to achieve the feat among those that gained independence after World War II. By entering the 1 trillion dollar club, South Korea is believed to rank with other major trading powers and this achievement has laid the groundwork for joining the ranks of advanced economies.

Korea’s yearly trade volume has hit the one trillion-mark seven times so far. This year, it reached the milestone 21 days earlier than the previous fastest record that was set in 2018. The upbeat trade this year is mainly attributable to robust exports.

I think Korea’s solid export growth has led to a rise in the overall trade volume. It would be fair to say that Korea’s manufacturing sector stays highly competitive. The economy has been on a recovery path since the fourth quarter of last year, but the recovery pace varies by industry. While manufacturing centering on durable goods has seen fast recovery worldwide, the service industry is still struggling. Manufacturing comprises a significant portion in Korea’s exports, which performed well to contribute to rapid economic recovery until the first half of this year.

Korea’s exports have extended growth for eleven straight months since November last year. Unlike 2018, when outbound shipments reached an all-time high on the back of the semiconductor boom, other industries including shipbuilding, smartphones and automobiles, have also fared pretty well this year. In particular, the Korean shipbuilding industry, which had remained stagnant for a long time, but is now showing clear signs of revival.

In the first half of the year, Korea came in first and second in the world, in terms of the price of orders for ships won by local shipbuilders and the amount of orders received, respectively. It is also worth mentioning the rapid growth of new export items, including foodstuff and cosmetics.

Most notably, the content industry has contributed greatly to enhancing Korea’s status and demonstrating its global competitiveness. In line with the worldwide popularity of Korean cultural content, including pop music, dramas and films, relevant food items and cosmetics products have been well received by foreign consumers. This year, overseas sales of cosmetics, electronic goods and agricultural and other food products have increased fast. The content industry has certainly helped enhance Korea’s national image the world over.

As of July, South Korea was the world’s eighth largest trading country, moving up one notch. The country had remained in the ninth place since 2009, except 2012. If this trend continues, Korea’s trade volume is expected to reach an all-time high this year, with exports also estimated to surpass the previous record of 604.9 billion dollars in 2018.

Korea’s trade volume hit the one trillion dollar mark about 300 days after the year began. There are still two months left before the end of 2021, so this year’s trade volume may exceed the previous record of 1.14 trillion dollars that was posted in 2018. The global export market is quite tough at present, as the U.S. and China have been mired in a trade dispute for the last five years. Many countries around the world prefer to use locally produced goods and seek to strengthen supply chains domestically. For these reasons, it is very challenging to penetrate the markets of other countries. Under these circumstances, Korea’s record-breaking performance in exports and trade is highly significant. We can expect Korea’s global ranking may rise higher in export and trade volumes.

Still, we should not overlook faster growth in imports, compared to exports. In the first half of the year, exports grew 26.1 percent year-on-year, while imports increased 24 percent. In the second half, however, imports have grown more rapidly than exports, due partly to rising prices of raw materials. In September, exports gained 16.7 percent on year, while imports grew 31 percent. If imports are greater than exports, the balance of trade will worsen.

The Korean economy expanded 0.3 percent in the third quarter of the year, the slowest since the second quarter of last year. The figure darkens the prospect for Korea to reach its GDP growth target of 4 percent in 2021.

The slower-than-expected growth in the third quarter is partly attributable to the spread of the Delta variant of COVID-19 and the subsequent slump in economic activities. Looking at the situation from a different angle, though, the Korean economy had been recovering very fast between the second half of last year and the first half of this year, and it may have entered a cooling-off phase for now.

Given that many export items are made of imported parts, it is necessary to import more to increase exports. That is, a rise in exports goes in tandem with an increase in imports. Korea needs to change its industrial structure in a way to procure materials, parts and equipment domestically so its export industry can create greater added value. The country should also closely watch a price surge in raw materials, since it may place a burden on the local economy.

As a major pillar of growth for South Korea, exports have driven the achievement of 1 trillion dollars in trade volume. Thanks to strong exports, Korea was able to become an economic power and is overcoming the COVID-19 crisis. But its heavy reliance on trade is worrisome, as the local economy might be vulnerable to three risk factors lingering in the global economy, namely, rising inflation due to a surge in raw materials, disruption of global supply chains and the U.S.-China conflict.

Korea is diversifying its trade portfolio, not concentrating on a particular industry too much, to strengthen its economic fundamentals. The Korean economy should be able to display its potential, which has already been demonstrated in the trade volume of 1 trillion dollars, in the harsh external economic environment.