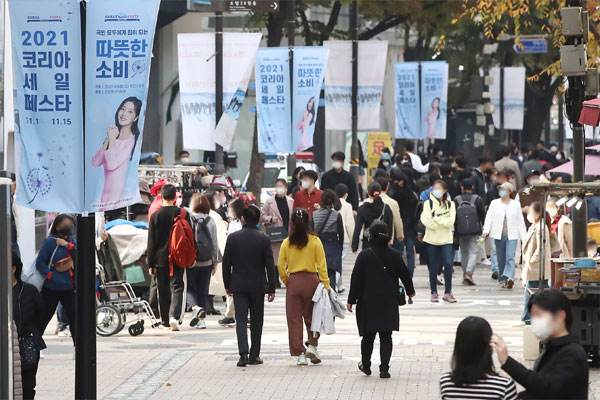 South Korea has entered the so-called “living with COVID-19” phase to start a gradual return to normal life, about 22 months after the first case of COVID-19 was confirmed in the country in January last year. Accordingly, long-enforced restrictions on business operations will be eased, while many employees who had worked remotely will return to offices in a phased manner. Various pump-priming measures are expected to revive consumption and exports will likely remain solid.

However, risk factors inside and outside South Korea, including inflation fears and the U.S.’s move to normalize monetary easing, might dampen the economic recovery in Korea.

Here is economic commentator Chung Chul-jin to discuss whether the South Korean economy will have a soft-landing in the process of getting back to normal under the “living with COVID-19” policy.

Exports have led the South Korean economy since last year, on the back of a strong performance of semiconductors, automobiles, steel and petrochemicals. From a longer perspective, though, it is very challenging for the manufacturing industry alone to support the economy. Domestic demand should revitalize, in tandem with robust exports. As the first phase of “living with COVID-19” started in South Korea on November 1, expectations are running high for the recovery of private consumption. The pandemic-driven pent-up demand may possibly explode.

Consumption is showing signs of reviving, as seen in some economic indicators. According to the Bank of Korea, the composite consumer sentiment index stood at 106.8 in October, up 3 points from the previous month. A reading above 100 means that optimists outnumber pessimists. The business survey index shifted to an upturn in October, and the economic sentiment index, which combines those two indexes, improved in the same month.

The news sentiment index has also been on the rise. The Bank of Korea publishes this index based on the analysis of business news articles. A reading above 100 means that there were more positive sentences than negative ones in the news articles, reflecting an improvement in household and business sentiment. To keep the positive momentum alive, the government is carrying out a variety of spending stimulus programs.

With the country entering a new phase of “living with COVID-19,” the government is making an all-out effort to boost the economy. It is considering distributing discount coupons worth 200 million US dollars to stimulate consumption. As if on cue, the country’s annual nationwide shopping event known as the Korea Sale Festa is now underway. By offering huge discounts during the event, the authorities are encouraging consumers to open their wallets. To achieve the 4 percent growth target this year, it is essential to see a recovery in private consumption in the remaining two months of the year. Having this purpose in mind, the government is holding various promotion events to shore up private spending.

Exports have propped up the Korean economy, despite the pandemic. South Korea’s exports exceeded 55.5 billion dollars in October, the second highest figure since trade data began to be compiled in 1956. South Korea’s outbound shipments have increased for 12 months in a row since November last year. Exports in the first ten months of this year amounted to 523.2 billion dollars, already surpassing the exports of the entire year of 2020. If the trend continues, it is highly likely that exports this year will reach an all time high.

Expectations are growing that both domestic demand and exports will increase to contribute to reinvigorating the economy. But it is too early to make a hasty conclusion. There are multiple risk factors, including inflation.

For now, growing inflationary pressure is one of the major unfavorable factors that may affect the South Korean economy and the global economy as well. Rising prices will discourage people from spending money, while surging prices of raw materials will place a financial burden on companies. Inflation will weaken consumption in countries, which Korea exports its products to, so it will eventually have a negative impact.

South Korea’s consumer prices rose 3.2 percent in October year-on-year, jumping above 3 percent for the first time in nine years and nine months. Prices of daily necessities soared even higher by 4.6 percent from a year ago, while the groceries price index increased more than 5 percent. In the course of shifting to the “with COVID-19” phase, the biggest problem is the pickup in inflation, since price spikes will discourage consumption.

There are negative external factors as well. The U.S. Fed has announced its decision to begin tapering the pace of its asset purchases from later this month, signaling a shift to monetary tightening. The monetary policy change in the U.S. will inevitably have an impact on the global economy. A weakening growth momentum of the Chinese economy also weighs down on the global economy.

Under these circumstances, stimulating consumption might stoke inflation, while containing inflation will weaken domestic demand. That’s why the government is growing increasingly anxious.

Amid soaring oil prices, the government says it will temporarily cut fuel taxes by a record 20 percent in order to bring inflation under control. But the government is also enticing shoppers to spend more by issuing vouchers and holding a massive shopping event. These measures aimed at increasing domestic demand may fuel inflation. So the government is carrying out two conflicting policies at the same time.

The Bank of Korea released a report on October 31 to analyze the consumption trend in some major economies that began their “living with COVID-19” policy earlier than South Korea. The report shows that the scheme has increased mobility of economic players significantly and contributed to a recovery in consumption in those countries. The number of visitors to face-to-face service segments, in particular, rose about 5 percent. This is why we have expectations for the economic effects of “living with COVID-19,” in the face of various risk factors.

The government and the Bank of Korea need to coordinate their policy lines. While the central bank hopes to begin the process of monetary tightening more quickly, the Ministry of Economy and Finance believes it is important to revive the economy. When policymakers stick to their own different opinions, the policies may not produce the intended effect. Therefore, it is necessary to fine-tune their differing policies.

Speaking of rising prices, inflation risks are likely to linger for some time, and indebted households should manage their debt situation properly.

The process of getting out of the pandemic and returning to normal life may not be entirely smooth. But the Korean economy has become more solid, while overcoming the pandemic. Based on its stronger fundamentals, the local economy should hopefully be able to pick up more steam in the post-COVID-19 era.