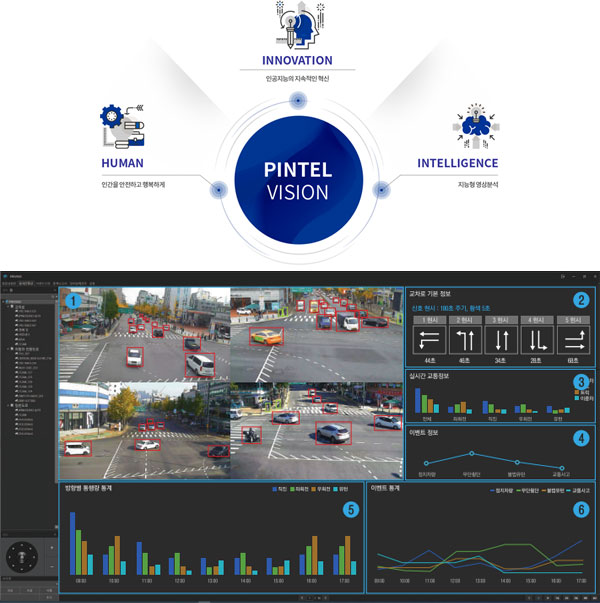 These days, video analysis uses artificial intelligence technology. We’ve developed our own deep learning algorithm capable of analyzing high-resolution images in real time without quality loss. We focused on research and development in the first three to four years after the establishment of the company in 2016, and we released products only recently. Based on our independent, unrivaled technology, we’re ready to respond to the growing demand in public projects or B2B industries for smart cities. We’ve carried out a total of 25 government-led smart city projects, conducting both R&D and business successfully. Our sales have more than doubled annually since the foundation of the company.

Kim worked at an IT firm for about 20 years. He was sure of the potential of AI-based video analysis and set up his own company, PINTEL.

As one of AI technologies, video analytics technology has already moved above human capabilities, overcoming visual errors, so it is expected to suit the needs of a wider range of areas.

As of last year, there were more than 1.3 million CCTV cameras installed at public institutions in South Korea. Using CCTV videos collected from everywhere, PINTEL is making people’s lives safer and more convenient.

Everyone probably agrees on the need to resolve various issues stemming from urbanization preemptively for a safer and more convenient city life. Smart city projects involve multiple areas, including education and energy. Among others, traffic and security are what we’re focusing on. In the traffic area, we provide video analysis solutions designed to enhance safety, boost communication and increase efficiency in road traffic. Speaking of security, we’re working on face recognition systems for preventing crimes, maintaining public order and finding older people with dementia.

A report shows that the global smart city market grows at a compound annual growth rate of 19 to 20 percent. The Ministry of Land, Infrastructure and Transport estimates that the Korean smart city market is expanding 24 percent. So, the local market is growing very fast. Previously, smart city projects were mostly about infrastructure construction. I imagine similar projects will focus more on services from next year.

A smart city refers to an intelligent city that solves urban issues like traffic, environment and housing by incorporating advanced information and communication technology. It sounds like a scene in the distant future. But smart cities featuring PINTEL’s solutions are already here.

The company developed AI video analytics technology to build the “Smart Crosswalk” system. If AI recognizes any pedestrian trying to cross the road through CCTV, it makes cars stop. If there aren’t any pedestrians, it may skip the walk signal. If there are the elderly and the weak, a person in a wheelchair or children on the crosswalk, AI extends the walk signal to ensure the safety of the vulnerable road users.

PINTEL is also proud of its “Smart Intersection” system, which collects real-time traffic information and controls the traffic signal in accordance with the information. By examining cars going straight and turning left or right, the system shortens the go-ahead signal for the less crowded road. On the roads where this system is tested, traffic tie-ups have been reduced about 15 percent.

The “Smart Crosswalk” and “Smart Intersection” systems have been installed in Seoul and other regions across the country on a trial basis, and they are expanding gradually.

PINTEL’s other eye-catching solution is the “Incident Detection” system, which was applied to the Western Underground Expressway that opened on September 1. It is a 10.33-kilometer, four-lane tunnel that stretches from the southern end of Seongsan Bridge to Geumcheon Interchange. By analyzing the real-time tunnel images taken by CCTV, the system automatically detects unexpected situations on the road, such as stationary vehicles, wrong-way driving and the emergence of a pedestrian, and notifies the control room of them. The system actually prevented a major accident on the very first day, when a truck collided with a small car inside the newly opened tunnel. The Incident Detection system’s alarm was activated to block vehicles from entering the tunnel, while the collision incident was handled swiftly under the guidance of the control room. That is, the system prevented a possible second accident and loss of lives.

In a piece of great news for PINTEL, the company has acquired a government certificate, which is very hard to obtain.

The certificate of New Excellent Technologies is given to technology developed by local companies or research institutes after rigorous screening. It is very challenging to get the certificate. PINTEL is probably the only AI solution provider to obtain the certificate. I think the certificate recognized our technology of analyzing images quickly and accurately using only a small amount of computer resources.

Also, successful solutions used for state-sponsored projects are recognized as innovative products by the Ministry of Science and ICT. Our traffic and security solutions gained this recognition. From 2022, the ministry will purchase innovate products and use them in other state projects. On the back of the ministry’s budget and purchase system, PINTEL’s technology is leading the company’s growth.

PINTEL continues its drive for innovation. After extensive research, the company has almost completed innovative technology of reducing the time for video analysis by 80 to 90 percent. It also has technology of recognizing faces at a distance of 12 meters with 99.7 percent accuracy. Using the facial recognition technology, the company will expand its business to more diverse industries including unmanned stores and entry and exit screenings at apartment complexes. It is planning on exploring foreign markets as well.

We hope to impress the people through our AI video analysis technology. We have a goal of becoming the No.1 technology firm in the global market. The goal can be accomplished only when competent workers with creative ideas achieve innovation. Having this in mind, the company is trying to make its employees happy.

A smart city isn’t simply about residence or living space. It can improve the quality of life, create jobs and protect the environment. The smart city itself is a huge industry.

Korea has rich experience and expertise in the development of new cities and also boasts the world’s best information and communications technology. The country has a high possibility of leading the smart city market, and PINTEL is at the center of Korea’s smart city projects. We’re looking forward to smart cities that will be created in the near future and PINTEL’s role in the process.