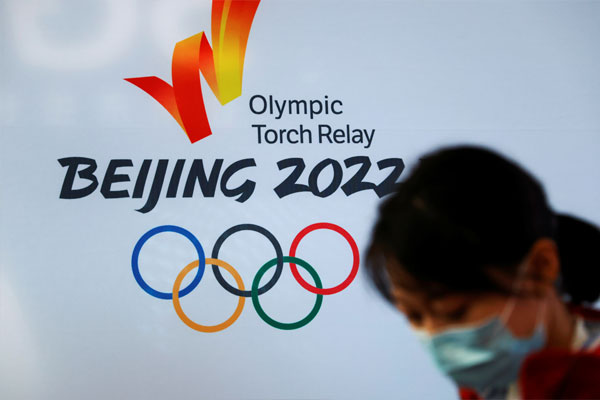 It will be hard to see such a scene at the 2022 Beijing Winter Olympics, which are just two months away. The Beijing Games are actually emerging as a symbol of bitter conflict between the U.S. and China, as the U.S. has announced a diplomatic boycott of the Games.

Here is Cho Yong-chan, director of the America China Economic Research Institute, to examine the U.S decision to refuse a diplomatic presence at the Beijing Olympics and its potential impact on the Korean economy.

As a reason for its diplomatic boycott of the Beijing Winter Olympics, the U.S. cited the ongoing genocide and crimes against humanity in the Xinjiang region and other human rights abuses. While U.S. athletes will be allowed to compete in the Games, the U.S. will not send any diplomatic or official delegation to Beijing for the event. White House press secretary Jen Psaki said that the U.S. would not contribute to the fanfare of the Beijing Olympics. Apparently, the U.S. has no intention of approving China’s scheme to use the Olympics to launder its image. The U.S. refuses to send a government delegation to Beijing, in a political move to deal a blow to Chinese President Xi Jinping’s authority and to make China lose face.

China has been so keen to use the Beijing Olympics to show off its successful COVID-19 response worldwide and pave the way for Xi’s third term in power. From China’s point of view, the U.S. has poured cold water on such an important event. China was furious, as expected, warning that it will respond to the U.S. boycott with firm countermeasures.

The U.S., for its part, is engaging in a war with China—a war it cannot lose. It has declared a diplomatic boycott in the broad context of the so-called “Strategy of Denial,” which calls for dealing a fatal blow to China in three ways. First, the U.S. seeks to deter China from launching a military challenge in Taiwan, in the South China Sea and on the Korean Peninsula. Second, the U.S. has formed alliances with its security partners for the purpose of containing China’s growing influence, as seen in regional groupings such as the Quad, Aukus and Five Eyes. Third, the U.S. tries to alienate China internationally and damage Xi Jinping’s absolute authority. Washington’s diplomatic boycott of the Olympics to be held in China can be understood in this context. Other examples include Western countries’ “Global Gateway” strategy to compete with China’s Belt and Road Initiative and the T12, a group of twelve leading “techno-democracies.”

Even before the U.S. diplomatic boycott of the Beijing Olympics, the U.S. and China had been mired in conflict over many issues, including the news about the establishment of the world’s largest rare earth company in China.

Rare earth metals have become vital elements for high-tech industries, as they are used to manufacture electric vehicle batteries, smartphone screens, fighter jets, missile defense systems and so on. Ahead of the Olympics, China set up “China Rare Earth Group,” in an apparent bid to control the production and export of rare earth elements. In doing so, China could weaponize the critical metals to retaliate against companies or countries joining the U.S-led supply chains.

In South Korea, heavy rare earth elements are used to make missiles, radar, drones and IT products. The problem is that South Korea imports the majority of the rare metals from China, which could limit the export of rare earth to South Korea at any time.

Rare earth metals are called “vitamins of high-tech industries,” as they are essential for IT products and the arms industry. The important materials are mostly produced in China. In 2019, China accounted for 63 percent of global production of rare earth metals and had 37 percent of reserves. South Korea’s reliance on Chinese rare earth elements is as high as 91.2 percent. If China stops exporting them or raises their prices suddenly, Korea will face a serious shortage of supply.

Meanwhile, the U.S. held a virtual summit on December 9 and 10, gathering leaders from 112 countries, excluding China.

In the most recent series of putting pressure on China, the U.S. held the “Summit for Democracy” last week. China was quite upset, because it was not invited to the summit but Taiwan was. The summit was aimed at bringing together countries sharing democratic values and isolating authoritarian forces such as China and Russia diplomatically. If the U.S.-China conflict intensifies, the world will only be divided into the U.S.-led global democratic order and the China-led global authoritarian order. Northeast Asia, in particular, has become a battlefield for a new Cold War between the two blocs. Their hegemony war may break out in the region at any time.

Washington’s diplomatic boycott of the Beijing Olympics is expected to negatively influence the South Korean government’s push to declare an official end to the Korean War. For South Korea, the Beijing Games were considered a great opportunity to declare an end to the war and facilitate the process of improving inter-Korean ties as well as North Korea-U.S. relations.

However, North Korean leader Kim Jong-un is unlikely to visit China because North Korea is banned from participating in the Beijing Olympics. Now that the U.S. has declared a diplomatic boycott of the Games, the prospects for South Korea’s diplomatic role in Beijing have become even murkier. Actually, South Korea is in a tricky situation, as it is forced to choose between the U.S. and China.

South Korea’s daily COVID-19 cases have surpassed 7,000. So, it is hard to expect the release of pent-up demand for now. Small business owners and the self-employed, in particular, are in extreme difficulties. It doesn’t seem the government will be able to achieve its goal of full economic recovery and growth target next year.

South Korea needs to maintain high-level dialogue channel with China to prevent any conflict from surfacing and to hold economic talks with the U.S. on a regular basis to strengthen bilateral cooperation and share important information. To expand its economic territory, South Korea needs to proactively join multilateral FTAs and upgrade the existing, low-level bilateral FTAs. Regarding South Korea’s eco-friendly projects and key industries including semiconductors, it should quickly relocate its factories in China to other countries including the U.S.

South Korea is in a dilemma over how to strike a balance in the U.S.-China rivalry. In a sense, though, South Korea could act as a buffer between the two superpowers to prevent their conflict from going to extremes. It seems necessary for South Korea to come up with well-thought-out strategies so it will not miss out on justification and practical benefits in diplomacy, security and the economy.