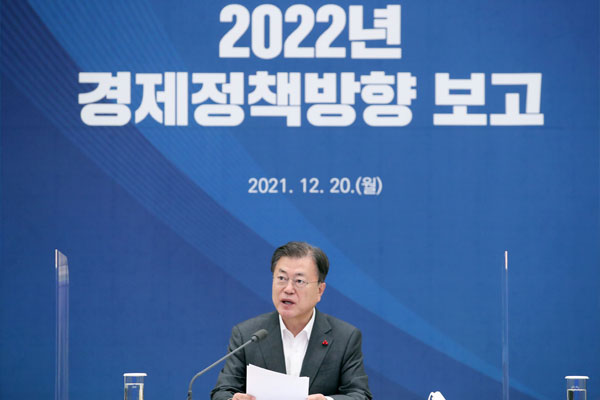 On December 20, the government announced its economic policy directions for next year. The 2022 policy goal is to overcome the COVID-19 pandemic crisis and completely normalize the economy. The government believes that this year’s recovery momentum will continue through next year, with exports and investment maintaining their upward momentum and domestic demand reviving. It forecast that the South Korean economy would grow 4 percent in 2021 and 3.1 percent in 2022.

Here is Kim Dae-ho, director of the Global Economic Research Institute, to examine the government’s economic policy outline for 2022.

The South Korean economy posted negative growth in 2020, the first year of the pandemic. The government projects a growth of 3.1 percent for 2022 after an expansion of 4 percent this year. Next year’s growth target is up 0.1 percentage points from the previous estimate. That might seem to be an insignificant figure, but it reflects the government’s commitment to achieving a strong and quick recovery in cooperation with economic players and to focusing on expansionary growth next year.

For the Korean economy to grow 3 percent next year, it is urgent to boost domestic demand. To this end, the government will maintain its expansionary fiscal policy next year. In other words, it will release more money to revive domestic demand and investment that have yet to recover from the economic shock of the pandemic.

In more detail, it will introduce special tax deductions on additional spending at traditional markets and provide more discount coupons. It will also remove duty-free purchase ceilings on Korean nationals for the first time in 43 years, in an effort to support the duty-free industry and encourage tourists to spend more in South Korea than overseas.

The government will spend 97 billion US dollars in implementing state-run projects and boosting private investment. It will designate 65 technologies in different areas including semiconductors and batteries as “national strategic technologies” and expand tax benefits for them. It will also invest 28 billion dollars in implementing the so-called Korean New Deal 2.0 initiative next year.

On top of achieving economic normalization beyond the pandemic, the government’s 2022 policy direction is also set at making massive investment in future businesses and new technologies, including those related to semiconductors, batteries and the hydrogen economy. In doing so, South Korea seeks to shift to a value-creating economy. The country hopes that this vision will take firm root in 2022.

The government’s policy outline for next year includes support for vulnerable groups in society. As the omicron variant is spreading and the number of critical COVID-19 cases has hit new highs for days in Korea, the government has toughened social distancing rules. Just a month after the nation began its gradual return to normal plan, the retightening of anti-virus measures has put small business owners and the self-employed in an even more difficult situation.

For those who have been hit hard by the pandemic, the government will provide 30 billion dollars in low interest rate loans. More businesses including barber shops, hair salons and others will be entitled to compensation for losses. The quarterly lower limit for compensation for small businesses will be raised to 420 dollars from the current 84 dollars.

Speaking of inflation, which is another major economic concern along with growth, the government expects that inflation will reach 2.2 percent next year.

Promoting growth and containing inflation are two basic goals in the economy. South Korea will target 3.1 percent growth and 2.2 percent consumer inflation next year. High inflation isn’t good because it may hinder growth. If the government has to choose which goal take priority, I think it needs to focus more on taming inflation.

The government plans to freeze utility prices such as electricity and gas bills in the first quarter of next year, in a move to ease the impact of rising prices on people’s livelihoods. The ongoing fuel tax cut is supposed to last for next April, but the government may extend the measure. The problem is that the policy of stimulating domestic demand may clash with the policy of keeping inflation under control.

On another disturbing note, the resurgence of COVID-19 cases and the appearance of new variants are adding uncertainty to the economy. The spread of new variants next year is feared to delay the recovery of domestic demand, slow the growth of the global economy, prolong supply chain disruptions and fuel inflation.

Some point out that the South Korean government is being too optimistic about the economy next year, especially about the pandemic situation. There are external risk factors as well. Tensions are escalating between the U.S. and Russia over a potential Russian invasion of Ukraine. It is possible that oil and natural gas prices will jump again. South Korea’s rising debt is another serious problem. In the course of paying the national debt, the country may issue more government bonds, but the move might lead to higher interest rates. Taking all these into consideration, the government needs to devise policies more meticulously.

Inflation has risen all around the world, prompting central banks in many countries to prepare to raise their key interest rates. On December 16, the Bank of England raised its interest rates to 0.25 percent from 0.1 percent. It is the first major central bank to lift interest rates. Many countries are now moving toward a tight monetary policy, shifting from their previous monetary easing stance aimed at keeping the pandemic-stricken economy afloat. Accordingly, uncertainties are expected to grow in emerging economies, while global financial markets may face higher volatility.

In South Korea, the presidential election is scheduled for March 9, 2022. Next year, the country will have to handle various factors both inside and outside the country.

I imagine that both the nation’s economy and the global economy will turn out well next year. The world has now gained confidence that it can overcome the pandemic crisis, with some countries recovering from the aftermath of the pandemic gradually. When the pandemic is over, pent-up demand will explode, while investment, consumption and exports will all increase. In particular, South Korea’s exports have remained strong to achieve a record-high figure this year.

Overall, the nation’s economy is taking a turn for the better and facing a great opportunity for another take-off. One of the most important tasks is to how to strike the right balance between growth and inflation and how to manage rising national debt.

Despite the ongoing pandemic, South Korea’s exports hit a new all-time high in 2021, turning the crisis into an opportunity successfully. The country should be able to display its great potential again in 2022 so the government’s economic policies will be implemented properly as planned. It is also hoped that an improvement will be made not only in economic figures but in people’s livelihoods as well.