Share
Print
It is common to think that the food industry mostly targets domestic consumers. But a company broke this stereotype and developed unique localization strategies to become a global confectionery firm. The company we’re talking about is Orion Corporation, a leading Korean confectionery manufacturer. Let’s hear from Yoon Hyun-ho at the company’s public relations office.

Orion is the only Korean confectionery firm that has ranked above 15th for six consecutive years in the list of top 100 confectionery companies in the world by global confectionery industry magazine Candy Industry. This year, the company came in 14th. We believe strong sales of our hit products last year, including Turtle Chip Snack, Toonis and O’Star, contributed to the upbeat result. Orion produces goods locally in China, Vietnam and Russia, while exporting products to more than 60 countries around the world. The global company sold more than 500 million of its signature snack, Choco Pies, in Vietnam last year. Also in Russia, the Choco Pie has established itself as a “national snack” that appeals greatly to local people with its taste and quality. Orion’s various products are well received by consumers the world over.

Orion has led the domestic market since its establishment in 1956 and has now taken root as a global brand. One of the reasons of the company’s success is that it explored the global market very early. 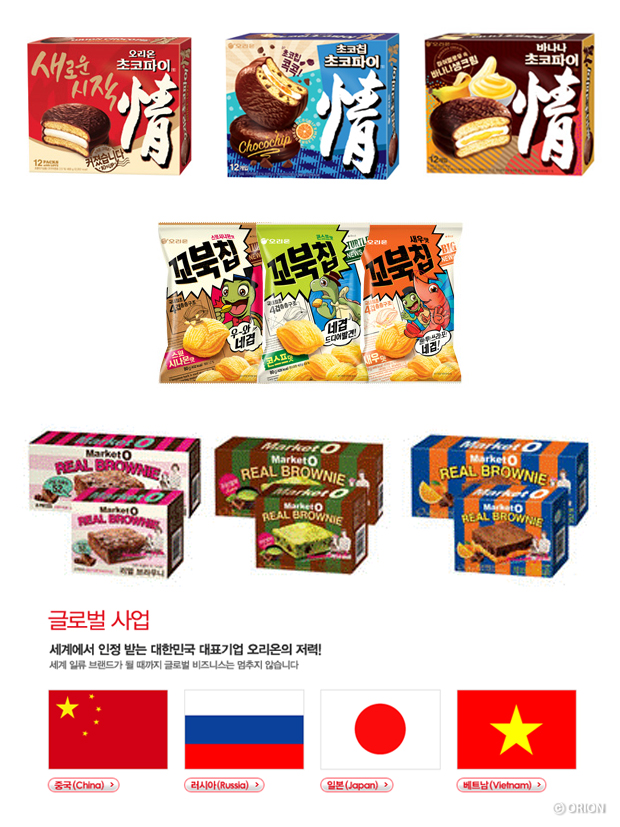 South Korea and China established formal diplomatic ties in 1992. Orion moved fast to open a local office in Beijing in 1993 to advance into the global market in earnest. It started exporting Choco Pies to Vietnam in 1995 and built a factory in Langfang in the Chinese province of Hebei in 1997 to target the Chinese market. In the 1990s, Choco Pies began to enjoy explosive popularity overseas through word of mouth. As we saw the huge popularity of the snack in the global market, we set up factories in China, Vietnam and Russia one after another. Today, our snacks are still greatly popular with local consumers in those countries.

Orion saw limitations in the domestic consumer market and started exploring overseas markets in the 1990s. To begin with, it had its eye on the huge Chinese market, which had previously been hidden behind the so-called “Bamboo Wall.” Afterwards, the company operated production bases in Vietnam and Russia as well to expand the market. Currently, Orion products are available in some 60 countries, including the U.S., Brazil and Iran. In China, five Orion brands, including Choco Pie, posted annual sales of 100 million US dollars until 2014. The industry leader sold more than 500 million Choco Pies in Russia in 2015 alone, and it produced the same result in Vietnam last year to capture the largest market share in the Southeast Asian country. The company’s endless efforts are behind its remarkable achievements.

Basically, food products should taste good to be chosen by consumers. We have managed the quality for over 40 years and developed our own expertise to please the palates of people with different tastes. In fact, there is no major difference in the ratio of mixture of the basic ingredients of Choco Pie. But it comes in different versions in line with cultural traits in each country. Gelatin, which is the base material of marshmallow that fills the pie, is usually extracted from pork. But for Muslim consumers who do not eat pork, we use gelatin extracted from beef. Of course, we earned a halal certificate for our products to be exported to Muslim countries. For Hindus in India, we use gelatin from seaweed, not from pork or beef. In this way, we use ingredients in consideration of each region’s culture and characteristics, but the basic flavor of the different versions of Choco Pie remains unchanged. I think this is one of the reasons for Orion’s global success.

Orion released its flagship product, Choco Pie, in 1974. In line with economic growth in the 1970s, Korean consumers began to look for premium snacks that would be different from previous ones. To keep up with the change, the confectionery firm started developing a new product. While touring some advanced countries, it saw a chocolate-covered snack served with milk and got an idea about a new product. After two years of research and development, the company finally created Choco Pie. The snack cake covered with chocolate and filled with marshmallow has constantly evolved thus far. Even without preservatives or alcohol, it maintains the same flavor in the bitter cold in Russia and in the intense heat in the Middle East. The company continues to improve the product for a deeper and more savory flavor and for richer and softer texture. And its localization strategies have overcome the cultural barrier successfully.

Orion has used Choco Pie’s brand concept of “jeong,” which is the iconic Korean emotion. It roughly means love or compassion in English. The company applied the concept to other regions. For example, it started inserting the Chinese character that stands for “gentleness” or “benevolence” on its local packaging in 2008. Chinese people regard it as the most important value in human relationships. In Vietnam, the company even uses a local phrase which is equivalent to “jeong.” The localization marketing strategy proved to be a big success. Choco Pies are so popular in Vietnam that the cakes are even served on ancestral memorial service tables across the nation.

In 1989, Orion ran a commercial campaign which showed Choco Pies being shared with family members, friends and neighbors. The warm and friendly image was also used in Choco Pie products exported to foreign countries, where the snack touched the hearts of locals by appealing to their own familiar emotions. As a result, the Korean confectionery firm has expanded its presence around the world, which it describes as “building the Pie Road.” Orion has created a craze for Korean snacks on the globe through the smart localization marketing and relentless innovation. Now, the firm is seeking another major transformation. 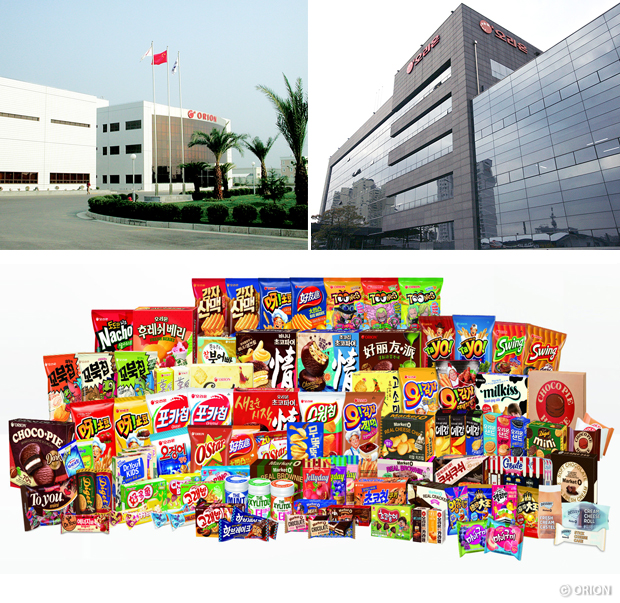 Orion has grown as a confectionery company for over 60 years since its inception in 1956. But recently, it has begun to tap into new businesses such as health products, substitute foodstuffs, desserts and functional beverages. The company plans to launch the four businesses in Korea successfully and expand them to China and Southeast Asia as well, so it can develop into a global food company over the long term. It plans to release a new functional beverage in the first half of next year by using seawater from lava rocks on Jeju Island. We’re paying attention to the rising demand for functional beverages in the Chinese market. Orion will release a relevant product locally in China and carry out sales marketing actively.

The company plans to unveil premium health products and substitute foods here in Korea in the first half of this year and to make inroads into the Chinese market with its new functional beverage product next year. It has set its eyes on new businesses in the hopes of becoming a global food company. We believe the company will be able to develop wonderful products to expand the scope of K-food in the global market and captivate the taste buds of people the world over.
Share
Print
List