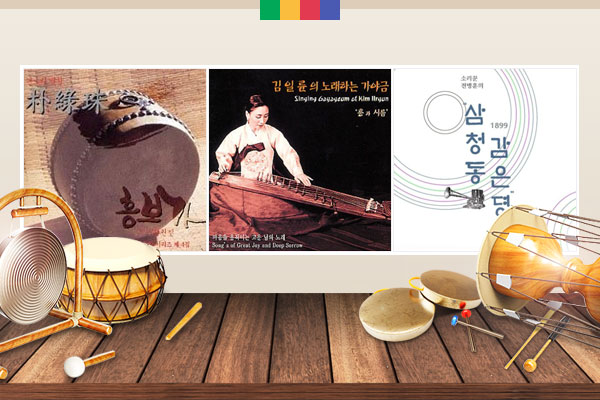 Joseon-era gentlemen used to take music as a way to refine their bodies and minds. So, even music-loving gentlemen used to play only slow, gentle music that calmed people. They then scorned pansori or folk music that excited people performed by lowly clowns. But in the late 1700s, a man named Kwon Sam-deuk권삼득, born to a powerful family, decided to become a singer. His family was aghast at his decision, accusing him of bringing shame to the family. In an attempt to dissuade him, his family decided to punish him by rolling him up in a straw mat and beat him. This punishment was so severe that some people died from it. When he was about to be beaten, Kwon Sam-deuk pleaded to sing one more time before he died. Upon hearing him sing, people became so moved by his voice that they teared up and decided not to kill such a talented singer,. Kwon Sam-deuk is said to have written the part in pansori “Heungboga흥보가” in which Nolbo놀보, Heungbo’s greedy brother, goes out to find the swallow that brought wealth to Heungbo. Here’s master singer Park Rok-ju singing that part from “Heungboga.”

It was rather easy to find artists who valued music more than their own lives, much like Kwon Sam-deuk. One such example was Song Man-gap송만갑 whose career lasted through the Japanese colonial period in the early 20th century. Song came from a family of master singers. Both his grandfather and father were masters of Dongpyeonje동편제 pansori. This musical tradition started with his great-uncle Song Heung-rok송흥록, who was nicknamed the king of songs. Dongpyeonje pansori is characterized by its straightforward and powerful tone. Song Man-gap was at the peak of his career when Korea was occupied by Japan, which was why his soulful voice provided comfort to many Koreans dispirited by the annexation. Claiming that singers were like fabric merchants, who sold whatever fabric customers desired, Song Man-gap modified songs long passed down by his grandfather and father. There was even a rumor that his father planned to poison him for ruining the family’s artistic heritage. After he was kicked out of the family, Song Man-gap traveled all over the country to learn various singing techniques before finding his own vocal style. Let’s listen to his favorite aria “Gogocheonbyeon고고천변” from pansori “Sugungga수궁가,” sung this time by gayageum virtuoso Kim Il-ryun.

The aria “Gogocheonbyeon” describes the scene where the turtle first comes out of the sea to capture a rabbit. While Song Man-gap comforted people with pansori, a singer named Park Chun-jae박춘재 amused people with Gyeonggi-do folksongs and funny stories. During the era of the Korean Empire, Park Chun-jae worked as a low-grade government employee in charge of royal entertainment. He would bring singers and dancers for royal parties and to cheer up royal family members. He was not only a nationally recognized singer, but also a producer-slash-comedian who knew how to accurately identify people’s needs and put together shows that could move people’s hearts. Audience members are said to have burst into laughter just by watching him bow to his fans. We are going to hear “A Dog’s Gripe,” one of Park Chun-jae’s funny songs. Gyeonggi-do exorcism rituals included possessed shaman priestesses speaking on behalf of gods. In “A Dog’s Gripe,” the spirit of a dead dog possesses a shaman and spews complaints about the difficult life of a dog. This funny performance would have allowed a little consolation to the Korean people and provided them with a chance to forget about their anger and laugh to their hearts’ content. This week’s last repertoire will be “A Dog’s Gripe” sung by young traditional singer Jeon Byung-hoon.