Share
Print
A small but meaningful press conference was held at a theater for independent films in downtown Seoul on August 6th. Here’s director of the animated film, Ahn Jae-hoon안재훈, to tell us more about the special film’s meaning.

When these stories were removed from school textbooks, children never got a chance to learn about them, even though adults still remember learning them in school. So I decided to give adults and children a chance to see these stories before they were completely forgotten. I also hope those in their 40s and 50s who read these stories in textbooks will feel more emotions than when they were young.

It was the debut of the animated film based on the short stories written by three of Korea’s most iconic writers. The film is titled “Buckwheat Flower, a Lucky Day, and Spring,” taken after the names of three seminal short stories by Lee Hyo-seok이효석, Hyun Jin-geon현진건, and Kim Yu-jeong김유정, respectively. Here’s Professor Han Chang-wan한창완 of Sejong University’s Department of Cartoon and Animation to tell us more about the film.

Korea’s animation industry is in a deep slump. They can’t find good material, whether it be a short story or a novel. But this project to make “Buckwheat Flower,” “A Lucky Day,” and “Spring” into an animated film was sponsored by a TV station and a large publishing company. The project aimed to demonstrate the beautiful imagination of Korean classical works to teenagers who don’t like to read, and grownups who have forgotten about Korean classical literature. The stories were not shown in words, but in pictures. The project came about because good stories were available to be adapted into film. 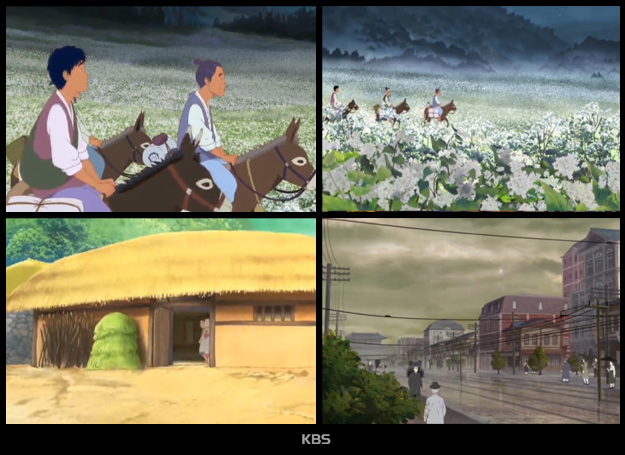 Published in 1936, Lee Hyo-seok’s “When Buckwheat Flowers Bloom” is one of the most well-known short stories in Korean modern literature. Born and raised in Pyeongchang in Gangwon Province, Lee’s rural sentiments were embodied in this story. The narratives about a traveling vendor’s romance resemble a watercolor landscape painting with white buckwheat flowers glimmering under the silvery moonlight. Here’s director Ahn Jae-hoon again.

Lee’s “When Buckwheat Flowers Bloom” takes place in the mountains and rivers located between Bongpyeong Market and Daehwa Market. The scenery should be sentimental and beautiful enough for the traveling vendor to spill out his most secret thoughts. Creating that atmosphere was the most difficult part.

The film starts with a group of traveling vendors at a small tavern in Bongpyeong sharing their experiences. They find out that a young merchant named Dong-i동이 is having an intimate relationship with a girl.

The enraged Heo Saeng-won허생원 blames Dong-i for shaming the entire vendor clan and beats him. But then suddenly Heo remembers his own youth and reminisces about that fateful night.

That clear summer night in Bongpyeong with a big, luminous moon is forever etched in Heo Saeng-won’s mind.

Heo Saeng-won came out to cool himself down at the nearby stream and ended up spending the night with a young woman reputed to be the most beautiful girl in Bongpyeong. That was their first and only meeting.

The young Dong-i and other vendors are all ears as Heo Saeng-won dreamily talks about the unforgettable summer night. By the time Heo picks up his stuff to leave the tavern, Dong-i follows him and carefully begins to tell his own story.

Dong-i drones on with his life story, telling his older companion that he has never known his father and how his mother was kicked out of her family and forced to leave her hometown of Bongpyeong for having a bastard child. Strangely, Heo Saeng-won gets a nagging feeling about the young man’s story. While trying to get a grasp of his unclear ideas, Heo Saeng-won slips and falls into a stream.

After Heo Saeng-won gets out of the water with the help of Dong-i, he proposes to the younger vendor to accompany him to another big market in Jecheon, where the young man’s mother is said to live.

When they are about to depart for Jecheon, the older man’s eyes wander over to Dong-i’s left hand, which holds a whip, and abruptly stop there.

Lee Hyo-seok’s “When Buckwheat Flowers Bloom” ends with Heo Saeng-won realizing that Dong-i is left-handed just like himself and that the young man is his own son. The animated film transferred the romantic nightscape of the buckwheat field covered in white flowers to the screen. Here’s Professor Han Chang-wan of Sejong University again.

Actually, there are only one or two lines describing the buckwheat field. But the buckwheat field is central to the story. The director did a wonderful job of drawing a splendid field of white buckwheat flowers under the moonlight. He did the work by hand. The best part about the hand-drawn two-dimensional animation is that it can express natural beauty in a way that’s more moving than any 3D or digital or machine-drawn film. The buckwheat flowers in the film look wonderfully real and the redness of the sunset more vivid and the blue sky more sparkling. The almost flawless depiction of the white buckwheat field takes people closer to the subtle sentiments featured in the story.

Kim Yu-jeong’s “Spring, Spring” is set against a rural village in 1935. It’s a satirical piece about the conflict between a man and his father-in-law. Here’s director Ahn Jae-hoon to tell us more about the film

The hierarchical relationship between a man and his father-in-law in the story “Spring, Spring” is not really confrontational, but rather amusing. I wanted to play that up so that the whole story would be balanced.

There were some elements of conflict in the story, but the story itself developed in a way that added satire to the discord between the two men. In the animation version, therefore, the director included pansori, Korean traditional folk songs, to highlight the humorous aspect of the relationship between the father and his son-in-law.

The young man had been working for the family of his betrothed for over three years like an indentured servant, because his future father-in-law would not give his permission for the marriage. The young man’s monologue is sang in pansori and it feels more like the audience is attending an interesting book reading, not watching an animated film. Cartoon and animation professor Han Chang-wan explains.

Pansori best expresses a person’s wide range of emotions and thoughts. The story “Spring, Spring” is about a young man’s distress and resentment at having to wait for such a long time to marry his girl. The most appropriate way to express his rueful thoughts is through pansori. Also, since the story is a classic, the director could have adapted it to fit his own vision. But director Ahn Jae-hoon decided to leave the dialogue intact, and only added his own imagination to the setting and situations. He thought pansori delivered the dialogue in the most fitting way.

The main character begs his future father-in-law for a wedding, but the old man contends that the daughter, Jeom-sun점순, is still too young. The young man is worried that his sweetheart may think of him as a coward. Then one day Jeom-sun confronts the young man and demands that he take action.

Encouraged by her steadfast love and belief in him, the young man boldly faces her father. But carried away by his own emotions, the young groom-to-be ends up grabbing the older man’s beard.

He expects Jeom-sun to take his side, but alas! The story ends with Jeom-sun crying over her boyfriend’s impertinence toward her father, leaving the boy defeated and wondering about the girl’s fickle heart.

While “When Buckwheat Flowers Bloom” and “Spring, Spring” are about nostalgia and memories of innocent love, “A Lucky Day” is a story about the pitiful lives of the lower class during the Japanese colonial period. Here’s director Ahn Jae-hoon.

Hyun Jin-geon, the author of “A Lucky Day,” focused on describing the tragic situation of an individual and the plight of Korean people under Japanese occupation. It’s difficult for our imaginations to envision the old capital city described in the story, but the animation does an excellent job of showing it through the drawings. The film shows the streets of old Seoul, the main character’s roller-coaster emotions and the events leading to his wife’s unfortunate death. 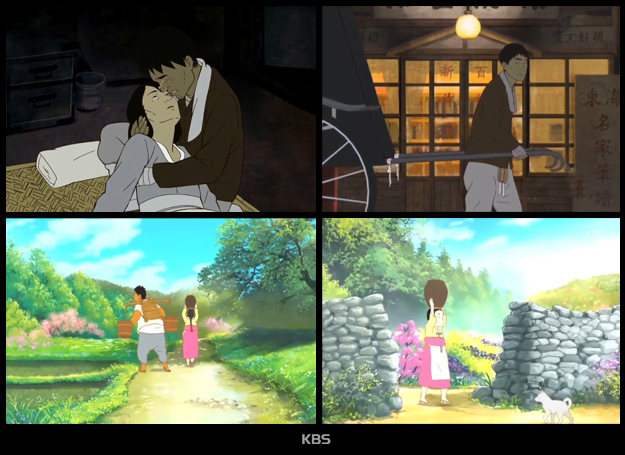 Hyun Jin-geon’s “A Lucky Day” was a short story published in 1924. The story begins with the main character, a rickshaw man named Kim, worrying about his ailing wife.

The scenes of the helplessness he feels at his personal situation and of him pulling rickshaws are intertwined to communicate Kim’s emotional ups and downs to the audience.
Although his wife didn’t want him to go to work, it turned out to be one of the luckiest days for Kim, the rickshaw puller.

Bad weather drove people to call Kim for rides and he even took a customer a long distance and earned a large fare.

After earning an unusually large sum, Kim buys himself some drinks and fish soup and even some beef soup for his sick wife. But when he returns home, he finds his wife dead, with his baby bawling next to her.

The story seemed to point out that the life of an ordinary Korean in that gloomy time ended in tragedy no matter how lucky a person seemed to be.

Each hand-drawn scene of the film “Buckwheat Flower, a Lucky Day, and Spring” captures beautiful scenery, but the Korean people’s deep sorrow and frustration govern the three stories. The animated film has given new life to Korea’s classical short stories and brought both old and young generations together under those common underlying sentiments.
Share
Print
List