Pilgrimage to holy sites, retracing the steps of Pope Francis

Share
Print
Pope Francis wrapped up his five-day visit to Korea on August 18th with a Mass at Myeongdong Cathedral, leaving behind a message of forgiveness and reconciliation. During some 100 hours of his stay, Koreans, regardless of their faith, were inspired by the pontiff’s teachings about sharing and true love. It’s been a month since Pope Francis returned to the Vatican, but an increasing number of people are still trying to find deeper meaning in the papal message.

Items with Pope Francis’s face on them are still selling like hotcakes. Advance orders have been placed for all 20,000 commemorative coins for the papal visit and books on the pontiff and his leadership style have been sold out in bookstores. It’s a telling sign that he has become a role model for all Koreans.

Fueled by the soaring popularity of the pope, Catholic holy sites in Korea, where he had stayed and visited, are receiving renewed attention.

A Mass is being celebrated at Yakhyeon약현 Catholic Church in central Seoul. The old Gothic brick building, designed by French priest E. G. Coste in 1892, is Korea’s first western-style church. The location of Yakhyeon Catholic Church is also significant. Here’s Father Gabriel Kim Sang-wook to tell us why.

This used to be the execution site located outside of Seosomun서소문. Many Catholics were brought to Seoul for trial and those sentenced to death were executed here. This is where a record number of Catholics were martyred, which is why Pope Francis visited here first. 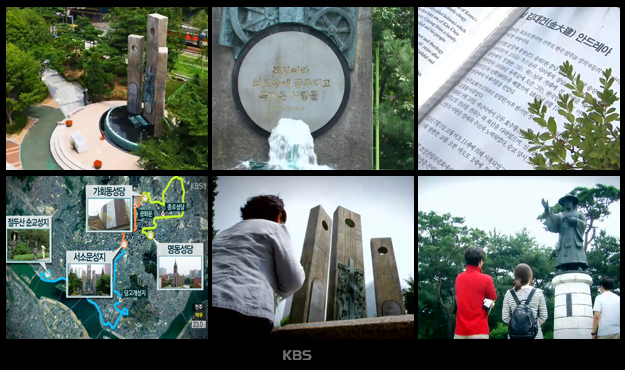 Looking down from the hill where the church stands, you can see the Seosomun Catholic Martyrs’ Shrine with three rectangular towers. About 200 years ago roughly 100 Catholic believers were killed for their faith in what is now Korea’s largest martyrs’ shrine. The martyrs were accused of renouncing their moral and filial duties, which stemmed from their refusal to hold memorial services for their ancestors. Korea’s first Catholic martyr, Paul Yun Ji-chung윤지충, and Augustine Jeong Yak-jong정약종, older brother of the esteemed Joseon-era scholar Jeong Yak-yong정약용, were among the Catholics who died here. Pope John Paul II had canonized 44 martyrs from here during his 1984 visit. Twenty-seven of the 124 Koreans who were also executed here for their faith were declared blessed by Pope Francis at the August 16th beatification ceremony. This is why Pope Francis visited the Seosomun Martyrs’ Shrine for a prayer before the beatification Mass in Gwanghwamun광화문.

Persecutions of Catholic believers in Korea came to an end around 1891 and that’s when the construction of Yakhyeon Catholic Church began on the hill overlooking the holy site to memorialize the martyrs. Names of the Catholic followers who were killed during each religious persecution are carved on the Heonyang헌양 Tower, three structures which represent “kal칼,” a long wooden board worn around the neck and used as a torture device in the old days.

The spirits of martyrs fill Yakhyeon Church, which inspires me to offer more sincere and meaningful prayers. Pope Francis’ visit to the site has prompted me to follow the examples of these martyrs, the ancestors of my faith. This is truly a blessed site.

Joseon’s first Mass was celebrated in Gahoi-dong Church, which holds an important meaning. Merely having believers in one place does not constitute a church. Sacraments should be performed there to become a real church. There were already 4,000 baptized Catholics before the first Mass took place, but the Korean Catholic Church officially began only after a priest had held a Mass within the Catholic community.

The Korean Catholic Church has a beginning unlike any other Catholic communities around the world. Here’s Mr. Choi Doo-ho최두호, a holy site tour guide, to explain more.

In other countries, missionaries and priests were dispatched from the Vatican to spread the faith. But in Korea, scholars had first studied Catholicism as an academic interest before voluntarily accepting it as a religion. The absence of western missionaries in the early part of religious proselytization is found nowhere else in the history of Catholic Church.

Most of the faithful Catholics in the early years of Catholicism in Korea were from the yangban양반 class or nobility. Scholars interested in pragmatic western technologies came to read books about the Catholic faith and study Catholicism as part of western studies. Here is Gahoi-dong Church’s Father John the Baptist Song Cha-seon to explain how Koreans came to request a Catholic priest from China.

The believers were largely from the nobility. Yangbans who traveled to and from China brought Cheonjusileui천주실의, a book on Catholic catechism written by Matteo Ricci in the late 16th century, and accepted Catholicism first as a field of study and later as a religion. Korean Catholics had at first baptized one another without a priest, but soon realized that they needed a priest to perform sacraments. The Catholic clergy in Beijing were surprised to receive an envoy asking for a priest from a country where no missionaries had been sent. So the Bishop of Beijing sent a Chinese priest, who was able to enter Joseon in secret because he looked Korean, to hold Korea’s first Mass.

The Gahoi-dong Church building was renovated late last year and now features a combination of Korean and western architectural styles to represent the bond of faith formed between foreign clergies and local believers. From outside it doesn’t look at all like a Catholic church. A hanok-style building is located toward the street to harmonize with the traditional Bukchon Village, but the inner area of the compound features the western-style chapel and parish house. A large part of the church building is in the basement and only a small cross indicates it’s a church. This symbolizes the early Catholic community in Korea that had to go underground to avoid persecution. In the church’s archive-slash-museum on the first floor, there are many books and documents describing the early days of the Korean Catholic Church, including an article in a French magazine about the beheading of Bishop Laurent Imbert앵베르 from France on September 21st, 1839. There is also a copy of Cheonjusileui read by Korean Catholics. But the most surprising piece is the record of baptism for King Euichin의친, the Joseon Dynasty’s last king. The August 18th, 1955 edition of the daily Kyunghyang Shinmun경향신문 described how King Gojong’s fifth son was baptized and given the baptismal name of Pio. In the center of the museum stands an old chair where many Korean Catholics in those days are said to have prayed and wept. Ms. Jo Yu-mi from the U.S. tells us of her feelings about coming to Gahoi-dong Church. .

My mother told me to visit this church. This is an important church in the history of Korean Catholicism and its recent renovation has transformed the building beautifully. I’m Catholic, but I don’t know much about Catholic history in Korea because I was raised in America. It’s nice that I got to learn a lot about the history of the Korean Catholic Church and the exhibition hall is surprisingly well-organized. 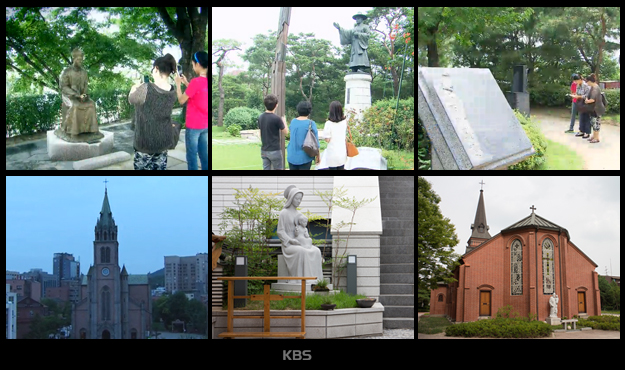 Pope Francis’s last official stop during his visit was Myeongdong Cathedral, Korea’s first parish church. Located in the heart of Seoul, it is one of the most popular tourist destinations. Mr. Choi Doo-ho from the Archdiocese of Seoul explains more.

Myeongdong Catholic Cathedral has Gothic Revival architecture and was designated as Korea’s Historical Site No. 258. It resembles a cross when viewed from above. The site used to house a Joseon-era government minister’s mansion. The Korean Catholic Church bought the residence and at first turned it into a church and an orphanage. Afterward the Church bought more land nearby to start building Myeongdong Cathedral in May 1892. It was completed six years later in 1898. So the church is 116 years old. Yakhyeon Church may be the oldest western-style church in Korea, but Myeongdong Cathedral is Korea’s oldest parish church.

Myeongdong Cathedral is important not only because it is Korea’s first parish church, but also because it provided a venue where the Korean Catholics persecuted for their faith could carry out their religious activities in public. The catacombs under the cathedral contain the remains of nine Korean martyrs, another piece of historical evidence that points to the immeasurable value of Myeongdong Cathedral for the Korean Catholic Church. Mr. Choi Doo-ho tells us more.

The Cathedral’s crypt is located directly beneath the altar. The crypt contains the relics of five saints who were martyred during the Persecution of 1839, including St. Imbert엥베르 and St. Maubant모방, and four other martyrs. It is Catholic traditional to erect a church on top of a martyr’s tomb, which is why Myeongdong Cathedral is built on top of the underground crypt.

Myeongdong Cathedral’s beginning dates back to the fall of 1780 when a catechism class was held in the home of court interpreter Kim Beom-woo김범우. The church is a living testament to Korea’s Christian history as well as a symbol of the nation’s democratization movement since the 1970s. During the 1970s and 80s when pro-democracy protests were at their peak, civic activists and students used to hold democracy and labor rallies in the cathedral compound, where governmental authority could not be exercised. Myeongdong Cathedral became even more special to the Korean Catholic community following Pope Francis’s visit.

The fact that Pope Francis visited here makes the place feel different. Although I used to come to Myeongdong Cathedral often, since his visit I think more about my faith and try to care more for the needy and neglected. I tend to look back on my actions more often and try to remind myself of the papal message.

The pontiff’s small signature on a vast white page is proof of his humble nature and consideration for the socially marginalized population. A month has passed since Pope Francis inspired the whole nation, yet even today the holy sites around Seoul see a steady stream of people trying to follow his footsteps and mirror his deeds.
Share
Print
List