Share
Print
If you walk up about 200 meters along the stone wall of Deoksugung Palace in Seoul, to the left there is a small path leading to the Seoul Museum of Art. It’s usually a peaceful enclave of art and culture hidden inside an urban forest, but these days people report hearing strange sounds emanating from the city’s iconic museum.

It sounds like a wind instrument or a grass flute. The sound is eerie enough to cause goose bumps, but it’s actually coming from Irish artist Jesse Jones’ video “The Spectre and the Sphere.” It’s part of a biennial celebration of modern media art called Mediacity Seoul 2014 currently hosted by the Seoul Museum of Art.

Mediacity Seoul is an international biennale of medial art hosted by the Seoul Museum of Art. It was launched in 2000 and this year’s festivity is the eighth one. The biennale began as a way to explore the aesthetic and humanistic sides of the rapidly changing city of Seoul through visual media art. Here’s the biennale’s artistic director Park Chan-kyong박찬경 to tell us more.

Mediacity Seoul is the largest biennale in Seoul. More than a thousand artists have taken part in the festival. They have grown to become widely recognized artists around the globe. Media is not a difficult concept to grasp. Everybody uses a smartphone these days. People watch movies and listen to music on their mobile phones. Electronics technology is used in many different ways to foster communication among people and media art is one such way. Media art is a communication-oriented genre that combines art and modern technology.

Mediacity Seoul has established itself over the past 14 years as an internationally respected event. This year’s theme is “Asia.” Here’s artistic director Park Chan-kyong again.

We focused on Asia and its culture, heritage, and history for this year’s event. Asian countries are geographically close and share common historical experiences pertaining to colonialism and the Cold War. There haven’t been many exhibitions on the long shared history of Asia, so Mediacity Seoul has decided to highlight Asia this year. 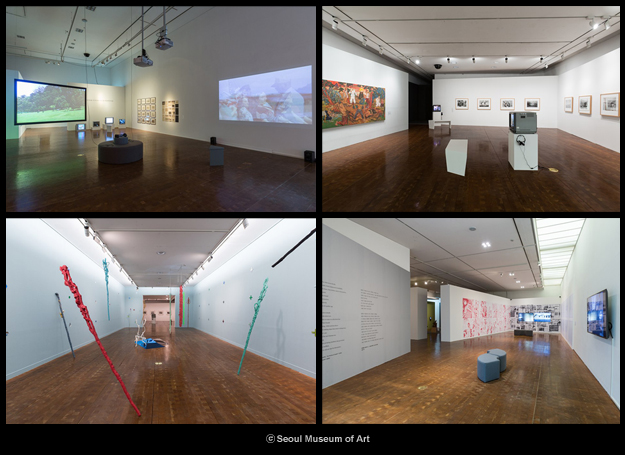 The history of Asian nations is represented in three key words – ghosts, spies, and grandmothers. Some 340 works of art by 42 teams from 17 nations are displayed on the museum’s three floors.

Ghosts represent history, but not the history depicted in school textbooks. It’s the history that has been forgotten or overlooked. Who knows about this history? Ghosts. It’s an analogy for people who know about obscure parts of history. It is meant to remind us of the history we have forgotten. The word “spies” was used to symbolize the Cold War, which has provided and to this day keeps providing singular experiences for Asian countries. And using the word “grandmothers” shows how women have endured and struggled through the era of ghosts and spies, and how they managed to shape a culture of their own.

The first floor of the Seoul Museum of Art features Asia’s memories of the past and present. Visitors encounter Jesse Jones’ “The Spectre and the Sphere” as soon as they enter the lobby. The video is set against an old, crumbling theater in Europe. Here’s curatorial team manager Jang Hyejin장혜진 to tell us more.

This work is set against a theater in Europe during a time when Communism was spreading quickly over the continent. The theater is actually a historical place where many European communists and socialists had gathered to read their declarations. But in the video the place is empty and deteriorated, and there are no people inside. It has lost all of its purpose. So the video contains only murmurs, the sound that represents ghosts. Those ghosts are of those who have perished under the Communist regimes in Europe. The disembodied whispering and muttering symbolize the disappearance of Communism.

Past the ghostly display and further into the center, visitors can see a big tree-like assemblage of golden bells. The piece is entitled “Sonic Full Moon” and was created by Korean artist Yang Haegue’s양해규. It can be spun using the handles protruding from the midsection and the brass bells dance around and make tinkling sounds. Here’s the biennale’s curatorial team manager Jang Hyejin with more.

Yang Haegue’s bell sculpture is inspired by Korea’s traditional shamans who used bells to communicate with the spirits. Do you want to hear it?

Next visitors come to a court-like setting, which is the work of Japanese artist Yuichiro Tamura. Ms. Jang Hyejin explains more about the artwork.

It looks like an old school. You can see a line on the floor, which indicates where a courthouse used to stand. In the 1920s the site of this museum used to be occupied by the old Korean Supreme Court established by the Japanese Governor-General of Korea. Mr. Tamura decided to summon the museum’s history and recreate the courtroom with the help of a stage director. For over a year he researched the history of courthouse, collecting old records and visiting the site many times, and finally recreated this place based on the original blueprint. It seems as if we’ve been transported back to the 1920s in a time machine.

The old Korean Supreme Court building used to stand where the Seoul Museum of Art is today. Japanese artist Yuichiro Tamura rebuilt the colonial-era courtroom of 1928 to reenact a murder trial, which took place back in Japan’s Edo period. In 1764 a member of the Joseon diplomatic delegation was killed by a low-level Japanese warrior. Tamura has brought back the grim atmosphere of the trial to remind us how difficult it is to find out the truth. On the center wall hangs an oil painting titled “The World Has Lost Its Colors; the Sun and the Moon Have Lost Their Light” by Korean artist Joo Jae-hwan주재환. The painting shows a full moon against the dark blue-green sky with a dark forest at the bottom. The painter says the dark tone of his art piece is to express the reality Asia is in. Here’s exhibition coordinator Lee Hyun-in이현인 to explain.

Joo Jae-hwan is a founding member of Reality and Utterance, a popular art group established in 1979. He’s still a very active painter, who tries to express social satire through his paintings. The painting on display for Mediacity Seoul is called “The World Has Lost Its Colors; the Sun and the Moon Have Lost Their Light,” and it depicts Asia’s situation today, where disasters have become almost a daily occurrence. 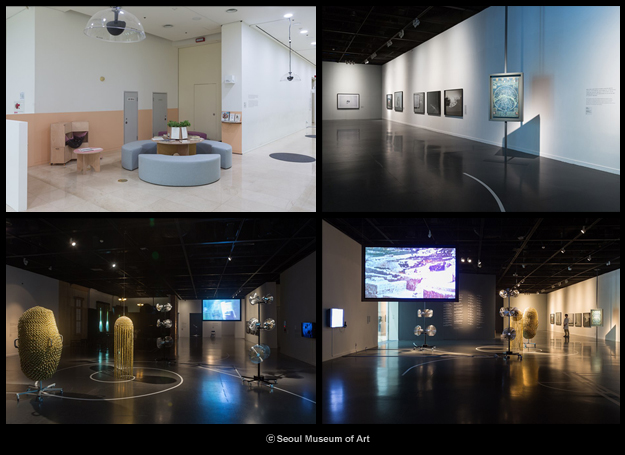 Then there is Tomoko Yoneda’s “The Parallel Lives of Others – Encountering with the Sorge Spy Ring,” which is a series of photographs that appear to have come from the memories of Japanese and Russian spies in October 1941, immediately before the outbreak of the Pacific War. Also, Nilbar Gures’s 닐바 귀레쉬 “Open Phone Booth” leaves indelible impressions on visitors with images of Kurdish people forced to use their mobile phones on a remote mountaintop.

On the way to the second floor people can see a painting of a boat stranded on dry land. It was created by Jo Hae-jun조해준 and Lee Kyeong-soo이경수 and it’s entitled “A Ship Believing the Sea is the Land,” which represents a piece of Korean fathers’ collective memory. Here’s Ms. Jang Hye-jin to tell us more.

The boat was created by layering melted paraffin and candlewax. The painting connecting the boat and the stairs was drawn by Jo Hae-jun and his father with pen and ink. The younger artist sketched his father’s memory and the father filled it with ink and brush. This piece shows the father’s old memories of war, Japanese occupation, and other historical events.

The second-floor exhibition hall features a variety of religious pictures and videos of Asia. Photographer Kim Soo-nam김수남 has captured slices of Korea’s ancient religious ceremony of gut굿 to preserve the vanishing local faith.

Kim Soo-nam has recorded Korea’s shamanistic culture from an academic perspective. The ancient religion has almost disappeared from long neglect and disregard, but Kim has brought it back with his photographs. It is also interesting to compare the images by Korean and Japanese artists who have played similar roles during the coinciding time.

Video artist Jawshing Arthur Liou자오싱 아서 리우 photographed the 2,300-kilometer pilgrimage to Mount Kailash from the Tibetan capital of Lhasa to show how Tibetan Buddhism spread to the rest of the world. While visitors relish in these visual works about various Asian cultures, their ears pick up the attention-grabbing sounds from “Grandmother’s Lounge: From the Other Side of Voices.”

People can’t help but notice this piece. Its title is “Grandmother’s Lounge: From the Other Side of Voices.” It just grabs people’s attention as they tour the second floor. Do you want to listen to it?

Audio clips of grandmothers singing and telling stories evoke a feeling of nostalgia in people and remind them of their grandmothers’ love.

The sound you’re hearing is called “sumbi-sori숨비소리,” which is the sound haenyeo해녀 or women divers make when they come up from the sea. Coordinator Lee Hyun-in tells us more about this video.

Mikhail Karikis actually lived in Jeju Island to produce this film. The film’s signature sound is a unique sound made by Jeju haenyeos. The island’s women divers make this sound not only to breathe but to communicate with one another in the rough seas. Korea has traditionally been a patriarchal society, but on Jeju Island the women divers used to wield more power over men. Sadly, this group of women divers is declining in number and power, and that’s what this artist was trying to capture. His video demonstrates the meaning of “Grandmothers,” one of the biennale’s keywords.

Also on display on the third floor is Che Onejoon’s최원준 “Mansudae Master Class,” which shows gigantic statues of African leaders built by North Korean artists to elevate the image of North Korea and its Juche ideology. However, the sight of North Korean structures in Africa only makes us realize that we still live in the Cold War era. Ms. Jang Hye-jin explains.

The video shows the relationship between North Korea and Africa, and the artistic and sociopolitical implications of North Korean artists’ works in Africa. People can watch three documentaries here and also look at North Korean architecture books, as well as building plans and North Korean workers’ time cards.

Australian video artist Pilar Mata Dupont submitted a video titled “The Embrace,” which shows two people in an embrace, but with their faces frozen in awkwardness. This video tried to reflect the current relationship between South and North Korea. Painter Choi Gene-uk tried to portray a peaceful North Korea through his acrylic paintings of “North Korea A” and “North Korea B”. Vietnamese media artist Truong Cong Tung쯔엉 꽁뚱 tried to show how the Vietnamese people’s faith can heal their minds and bodies through his work “The Magical Garden”.