Share
Print
The sound of Taepyeongso (태평소) leads the traditional Korean nongak troupe on stage while the audience gives an enthusiastic round of applause. With the Taepyeongso melody leading the troupe, traditional percussion beats intensify as the performance reaches its peak. The audience is overcome with emotions watching the intense performance. Performers furiously turn their sangmo (상모) while delicately dancing with their sogos on stage. This scene is from a production called Mupung (무풍) by Yeonheedan Palsandae, an all-female traditional nongak troupe.

Yeonheedan Palsandae performed at the National Theater of Korea from September 18th to the 21st. Mupung is a revival of traditional folk performances from 50 years ago, when all-female nongak troupes enjoyed huge popularity and toured around the country.

The first record of an all-female traditional nongak troupe in Korea was back in 1957. The all-female nongak troupe was comprised of 15 to 20 year old female performers from the Namwon Gugak (남원국악) Center. Here’s Yeonheedan Palsandae’s artistic director Kim Un-tae (김운태) for more.

Traditionally, nongak and poongmul were performed only by men. Originally, it was performed as a part of farm work on rural holidays and at village events until it became professionalized with the growth of traveling entertainers. Namwon has a diverse sound and active performance base for traditional Korean folk music. When women started to participate in the performances they gained a lot of popularity which is how the first all-female nongak troupe, Chunhyang Female Nongak Troupe (춘향여성농악단), was established. They pioneered many more all-female nongak troupes around the country such as Arirang (아리랑), Baekgu (백구) and Jeonju (전주).

A member of Honam’s first female nongak troupe, Ms. Lee Yeong-dan (이영단), says she used to perform under a fake name in order to avoid her disapproving parents. 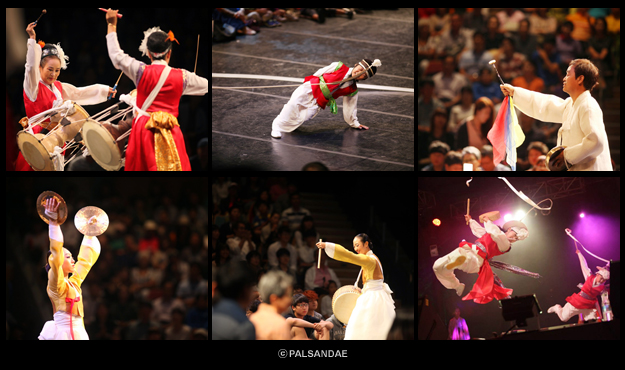 In the old days, I performed under the stage name Lee Jeong-mi (이정미) even though my real name is Lee Yeong-dan. After I joined the all-female nongak troupe, my parents filed a missing-persons ad in the newspaper, so I had to hide. The artistic director changed my name to Lee Jeong-mi. I couldn’t use my own name back then. Now I go by Lee Yeong-dan but my stage name is still Lee Jeong-mi.

From tents to instruments, the all-female nongak troupe toured all over Korea with everything on their truck and attracted crowds of people everywhere they travelled. Here’s Mr. Kim Un-tae again.

The words “all-female nongak troupe” has somehow become a pronoun but nongak is not the only thing these performers do. They do a variety of acts such as singing and dancing as well as Korean traditional storytelling. The all-female nongak troupe continuously develops various ways to reach the audience. The acts are old but it’s because the old materials are excellent. When you stick to the original material, inevitably an impromptu deviation or creative moment occurs. This is how a new performance naturally materializes.

I’m proud to say these teenagers and 20-year-olds have been living and training together for the past three years. Everyone wakes up at 6 a.m. and rides the bicycle for an hour or plays soccer together. Whether you’re young or old everyone has to follow the rules. When the morning exercise session is over we eat breakfast and continue training. That’s what the troupe has been doing for the past three years. I wonder if other youngsters would have been able to follow our rigorous routine. I’m really proud of our troupe.

Yeonheedan Palsandae is comprised of 20 performers. Their ages vary from six to 60, but training begins very early for everyone. Following a morning of running, biking, and a game of soccer to increase strength and stamina, the performers focus on their training. After such dedication and hard work Yeonheedan Palsandae debuted at 2012’s Yeosu International Expo. Here’s Master Soriggun (소리꾼) Ms. Jang Bo-m (장보미).

We put on 400 performances during the Yeosu International Expo. For 93 days we put on four performances a day. Afterward, we performed at the London Paralympics, and also in Tokyo, Italy and Turkey. We also toured around the country and brought joy to countless towns and villages in Korea.

After gaining confidence performing at the Yeosu International Expo and touring around the world, Yeonheedan Palsandae finally performed at the National Theater of Korea. This performance included a well arranged combination of traditional folk music as well as singing, storytelling and dancing, which brought fresh public attention to Korean traditional folk performances.

The performance begins with Palsan percussion dance. The traditional pungmulpae (풍물패) or percussion team enters the theater. Since it’s the beginning of the show, the Yeonheedan Palsandae members start playing from the back, performing around the audience, while five percussionists perform a dynamic traditional drum dance on stage.

Despite being female performers, the rhythmic sounds of Korean traditional percussions are as skilled and powerful as any male folk percussionists. Their delicate facial expressions and dance movements are an added bonus to their overall performance. In fact, the drumming technique of this all-female troupe is said to be unique. Here’s Lee Yeong-dan to explain.

In the old days, all the teachers were male. So women couldn’t even dream of playing the jangu (장구). Percussion performances are all about strength and power. So when we trained, we started with how to drum powerfully. I told these women no matter how hard they drummed they were still drumming like women so they needed to think they were men and drum even harder with even more power. That’s why our female percussionists sound so powerful playing jangu and kkoenggari (꾕가리). Our techniques are very hard for ordinary women to mimic. 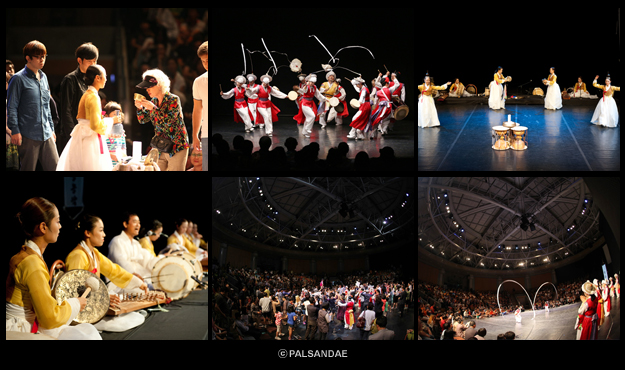 After the powerful start with the Palsan percussion dance performance, the Yeonheedan Palsandae troupe continues with a Binari (비나리) performance to bring luck in a show of gratitude toward the audience.

The Binari performance prays away various misfortunes that disturb our day to day lives and prays to bring good luck to everyone. Drum sounds resonate from the back of the stage around the theater like a blanket of good fortune.

I don’t normally pray, but these days there are so many things to be thankful for. I pray for all the fortune that has been bestowed upon me. We worked hard but I think something greater is helping our success. The reviews have been amazing. I honestly thought we wouldn’t sell that many tickets so I even ordered certain seats to be closed off because it’s hard to perform looking into empty seats. But to my surprise, all 660 seats were full. It was surreal. There were even young audience members. The timing couldn’t have been more perfect.

As the nongak performers run back and forth crisscrossing around the stage, the sogogguns (소고꾼) start flipping through the air. Moving to the dynamic beats and melodies, sogogguns skip up into the air and flip around the stage continuously. The audience becomes completely mesmerized by this performance. As the audience cheers on, sogogguns flipping through the air become more enthusiastic with their performance. Here’s 14-year-old sogoggun, Ms. Park Geun-won (박근원).

I like being a part of the troupe. Physical training is the most difficult part. Not only do you have to turn the sangmo with your head, you also have to flip around the stage without stopping. We train like gymnasts to get rid of the fear of flipping mid-air and we also play soccer to build teamwork. I really hope that Korean traditional folk performance art continues to prosper. It’s important for Koreans to realize the excellence of Korean traditional arts.

After an electrifying pangut performance by the nongak troupe the audience applauds and cheers enthusiastically. From instrumental performances to dancing and singing, the all-female nongak performers showed the true beauty and awe of Korean traditional performance art.

Woman 1) I really enjoyed the show. Although they were all female the performance was powerful. It was great. I liked everything about it.
Woman 2) It was my first time watching an all-female nongak performance. It was a lot of fun showcasing various rhythms and dances. I feel rejuvenated.
Women 3) It’s amazing to see women in their 60s performing with such power.
Woman 4) I’ve seen male nongak performances such as Kim Duk-soo’s Samulnori Troupe which is powerful. But it’s my first time watching an all-female troupe. They showcased unique feminine movements. It was different from other nongak performances!
Male 1) Male performers have heft, but female performers are light and swift so it was like watching butterflies on stage. Overall, it was a more fabulous performance.