Share
Print
A concert marking the hundredth anniversary of the birth of journalist and scholar Kim Yeon-jun was held at Gwangjin Art Center on October 28th. Kim Yeon-jun was the founder of Hanyang University, and also wrote and composed 3,600 pieces of gagok, Korea’s contemporary song. The song you just heard now was baritone Koh Seng-hyoun’s rendition of “I Will Live in the Green Mountains,” one of Korea’s beloved gagok pieces, also written and composed by Kim.

(Woman 1) I loved the lyrics. Each passage is so beautiful. I love “I Will Live in the Green Mountains” and sing it all the time. Its words are just so lovely.
(Woman 2) The song was perfect for the autumn. The lyrics were not just words to a song, but a heart-warming poem. It’s so beautiful that even someone who doesn’t know much about music, like me, can enjoy it. I’m listening to it with my heart.

Korea’s autumn is a splendid yet sorrowful season. Colorful fall foliage and the clear blue sky are delightful, but the chilly air the dead leaves strewn on the streets deepens loneliness and sentimentality. So the wistful autumn is the perfect time to listen to gagok, which is practically a poem set to music. Perhaps that’s why there is an abundance of gagok concerts around this time of the year. This autumn is particularly meaningful for gagok lovers in Korea because this year marks the centennial of renowned gagok composer Kim Yeon-jun’s birth. Hanyang University Museum is celebrating the event with a special exhibit entitled “Poems Flowing on Music Sheets – A Century of Gagok.” Here’s Hanyang University Museum researcher Hwang Na-young to tell us more about the exhibition. 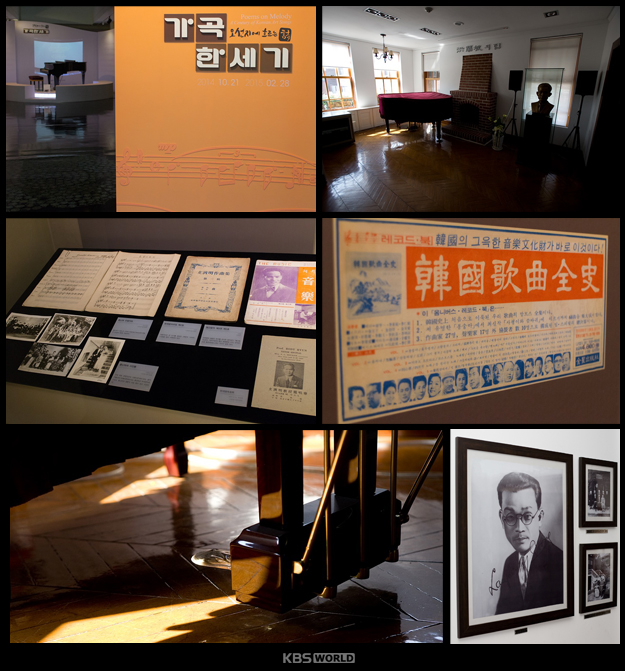 The exhibition is in two parts – the history of gagok and Kim Yeon-jun’s music world. The first part covers the introduction of western music in Korea, development of gagok, and Korean composers, poets, and singers who helped establish gagok as a music genre in Korea. The second part shows how popular gagok used to be. Gagok was at one time the staple of TV shows and concerts. Everyone loved and sang gagok and the exhibit looks back on that popularity. Visitors are invited to listen to a few gagok performances and watch a concert from back then.

The history of Korean gagok began in the late 19th century, when western culture was introduced to Korea by foreign missionaries. They taught hymns to spread Christianity and that’s how western music was brought into the country. So the history of gagok overlaps with the dispersion of western music in Korea. Here’s Hanyang University Museum researcher Hwang Na-young once again.

Western missionaries brought western music to Korea. Contemporary composers such as Kim In-shik and Hong Nan-pa first came in contact with this new music from the west when they saw the wife of a missionary playing the piano. There are records of them learning to play western musical instruments, such as the violin, piano, and organ, from the missionaries. Then music was taught at the schools built by these missionaries and students naturally came to learn about this type of music. Western music was an important part of the curriculum provided at Saemunan Church, built by Horace Grant Underwood, the first Christian missionary in Korea, as well as Ewha Hakdang and Pai Chai Hakdang. Korea’s first music department was established at Ewha Hakdang in 1925, where hymns were taught. Musicians from Ewha Hakdang then went to study in Japan, the U.S. and Europe, and brought back what they learned from the west to establish western music in Korea.

The exhibit features hymns taught to students back then and musical events held at modern schools as well as Korea’s first hymns composed by Horace Grant Underwood. Underwood’s book of hymns containing 88 scores were published in 1894. It was recognized as Korea’s first music book with western music scores and designated Registered Cultural Asset No. 478 by the Cultural Heritage Administration last August. So it was inevitable that the early Korean gagok took on the form of western music. Director Choi Young-shik of the Korean Art Song Research Institute tells us more.

In the early 1920s the gagok genre was much like western music. Gagok is a blanket term for Korean lyrics and poems set to western-style music. This is different from the discipline of gagok in the Korean traditional music genre. The gagok we are now familiar with is lyrics set to western-style musical scores and sung with musical accompaniments. That’s why the early gagok pieces show rather awkward synchronizations between the words and music.

Hong Nan-pa was a writer as well. His collection of short stories, entitled “Soul of a Maiden,” featured a violin piece without lyrics called “Aesu” or “Sorrow” in the book’s introduction. Three years later a lyricist named Kim Hyeong-jun wrote the words for “Aesu” and that’s how the gagok “Bongseonhwa” was born.

When a poem was set to the sorrowful “Aesu” the song amplified the Korean people’s hopeless situation and doleful sentiments at the time.

The exhibit also shows how gagok was made and spread. Since poems reflecting the situation and prevalent emotions of a time were set against music, gagok’s ambience changed as times changed. During the Japanese occupation, most of the songs were about the Korean people’s anguish and desperate longing for independence. The most well-known gagok of that period is “Seonguja” or “Pioneer,” a poem written by Yoon Hae-young set to Cho Du-nam’s music, released in 1933.

This song’s setting is not Korea, but the Chinese city of Longjing, where Korean freedom fighters had their headquarters. Just three kilometers from the city stood a mountain and at its peak was the lone pine tree featured in the song “Seonguja.”

The green pine tree ages and ages
But the Hyeran River flows for a thousand years.
The pioneer who used to ride a horse at the riverside long ago
Where do his bold dreams deepen now?


The pine tree symbolized the freedom fighters’ determination to gain independence. When the song rapidly spread among Koreans, the Japanese government killed the pine tree in 1938. But in 1991 the city of Longjing and a Korean civic activist replanted a pine tree at the exact spot where the symbolic tree used to stand.

The joy of liberation was short-lived. The Korean people suffered gravely through the Korean War that erupted in 1950. But, despite the hardship, Korea’s gagok blossomed. Hanyang University Museum researcher Hwang Na-young explains.

The tragedy of the Korean War gave rise to a number of memorable songs. Koreans took refuge in the southern cities of Busan and Daegu, where poets and composers met to express the prevailing sentiments of the time through music. Many inspiring gagok pieces were created there at the time, such as “Barley Field” and “Bimok.”

Even when the war was over, Korea’s hardship did not end. The entire country was ravaged, countless Koreans lost their homes and loved ones, and the fields were littered with the bodies of the dead. In 1969, after seeing the remains of unknown soldiers at a battlefield, TV producer Han Myeong-hee wrote a poem called “Bimok,” and songwriter Jang Il-nam wrote a score for it to create another legendary gagok. Han Myeong-hee’s interview can be heard at the special exhibition at the Hanyang University Museum.

The division of Korea caused many families to be separated and displaced from their homes. Now North Korea has become a place to which they cannot return. The deep longing for their homes and family members was the main theme for the beloved gagok “Longing for Mt. Geumgang,” released in 1961.

Korea’s gagok was always there to comfort the broken hearts of Koreans and give them hope during the most difficult times. There is a section at the exhibition about the poets and musicians who helped develop gagok. Hanyang University Museum researcher Hwang Na-young is here again to tell us more. 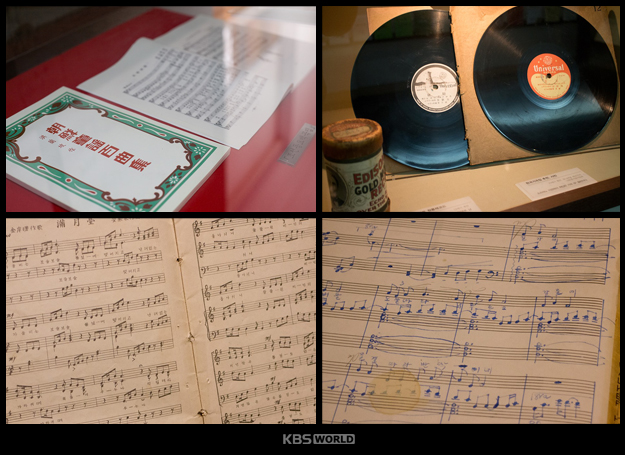 A good gagok must have three components - a stirring poem, music that goes well with the poem, and a singer who can best express the sentiments. That’s why we have a section devoted to the poets, singers, and composers, who made major contributions to the gagok genre. There are musical instruments, music scores, furniture and magazines from that time at the exhibit. The gramophone was borrowed from the late composer Na Wun-yeong and an ashtray, a pen holder, and a music school graduation ring are from Hong Nan-pa’s relics.

Some of the songs feature different lyrics set to the same music. For instance, Chae Dong-seon wrote a song that had three separate lyrics. So there are three versions of this gagok.

Chae Dong-seon had composed a music score called “Gohyang” or “Hometown.” The music was supposed to accompany poet Jeong Ji-yong’s poem of the same name. But the poet went to North Korea in the 1950s and this gagok was banned. So another poet, Lee Eun-sang, wrote new lyrics for the music, which is now known by the name “Longing.” Later, poet Park Hwa-mok changed the words a little and named it “Manghyang” meaning “Homesickness.” Korea’s tragedy has ended up creating three versions of the same gagok.

There are also instances of different music scores set to the same poem.

If a poem is really great, it would be coveted by a number of composers. The most popular poem set to music in Korea is “Azalea” by Kim So-wol. The words are just perfect to be set against music. It is also the most beloved poem of the Korean people. Amazingly, the poem was used for 15 different songs.

The glory years of gagok continued until the 1980s. Back then there were many TV and radio shows about gagok, and gagok concerts were said to be so popular that tickets were always sold out and scalpers were rampant. But as time passed, the pop genre has become more diversified, and gagok’s popularity has been replaced by rock and dance music. However, gagok is undergoing a makeover to keep up with the changing times and regain its past acclaim. Director Choi Young-shik of the Korean Art Song Research Institute explains more.

You may think that Korean gagok has all but vanished now, but it really isn’t so. Gagok has been with the Korean people since colonial days to give voice to their hardship. Gagok is the true embodiment of Korean sentiment, because Korea’s most beloved and beautiful poems were set against music. Despite the overwhelming presence of K-pop and other genres of music, I believe the legacy of gagok will live on.

For nearly a century gagok has represented the sentiments of the Korean people and provided hope when times were hard. Even now, gagok is providing inspiration with beautiful lyrics and melodies.
Share
Print
List