Gimjang, preparing for a delicious winter

Share
Print
These days, large franchise supermarkets and traditional markets are busy selling ingredients for kimchi, such as garlic, cabbage, and chili pepper powder. It is gimjang season in Korea, from November to early December, and it’s a time when almost all Korean households make kimchi to last throughout the coming winter.

(Woman 1) Kimchi is the main staple, the absolute sustenance, next to rice. I always make my own, because motherly love goes into it.
(Woman 2) In the old days people would make kimchi as part of preparation for winter. They used to make generous amounts to last through the winter in comfort and without worry.

Kimchi makes Korean meals so much richer. Cabbages taste different depending on the season they’re cultivated, so kimchi also varies in flavor depending on the season it’s made. But the gimjang kimchi made around this time of the year is special, because it not only nourishes us and makes our meals more delicious, it is also incredibly versatile, as it can be used to make stews, pancakes, dumplings and more. 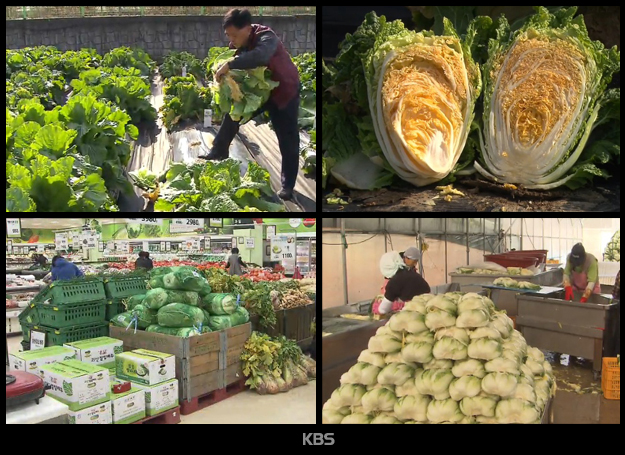 (Woman 1) Our family must have it. Gimjang kimchi can last us for a whole year and it can be used in many different recipes. It can be made into soup, stew, et cetera. What we really need is kimchi.
(Woman 2) Fresh kimchi is delicious as it is and well-aged kimchi is also delicious as it is. All types of kimchi are good. We never get sick and tired of it, even when we eat it for every meal. A meal wouldn’t be complete without kimchi, and no delicacy in the world would do without kimchi. It’s so good. A Korean table wouldn’t be right if there’s no kimchi.

Gimjang kimchi is kept for a long time, and that’s why napa cabbages harvested in the fall, between late October and November, are the best. These cabbages don’t go soggy even when fermented for a long time, so people can enjoy fresh, crunchy kimchi all winter long. Gimjang is a big family event, so around this time of year markets set up a separate section for kimchi ingredients. Here’s Mr. Na Byeong-mok of Nonghyup Distribution’s Hanaro Mart.

We allocated the most space to the main ingredients: napa cabbages and daikon radishes. There are places for salted seafood, oysters, ginger and garlic as well. We’ve reduced the fruit section and instead put cabbages and radishes. The special gimjang event started on October 6th and lasts for 39 days. We also have 5,000 tons of salted cabbages available. I think they will be sold out.

There is another section of the market enjoying brisk business. It’s the household appliances section. You may think that appliances don’t have anything to do with making kimchi, but kimchi refrigerators are one of the best-selling household appliances in Korea. Gimjang kimchi is traditionally kept in clay urns and buried in the ground to retain that fresh taste throughout the winter. But since modern-day Koreans mostly live in cities and apartments, they don’t have anywhere to bury kimchi urns. That’s where kimchi refrigerators come in. Here’s sales manager Lee Dong-geun to tell us more.

It is a necessary appliance these days. I can’t keep kimchi outside and my ordinary refrigerator is too small for the kimchi containers. That’s why I need a kimchi refrigerator.

Cost is one of the concerns for housewives when making kimchi. Since gimjang kimchi must last the entire winter season, just two or three heads of cabbage won’t be nearly enough. Fortunately, this year’s napa cabbage harvest was very good, driving down cabbage prices by more than 30% from last year. That’s about a dollar per cabbage head, substantially cutting down the cost of kimchi. But Korean homemakers no longer buy raw cabbage.

These days, store-bought salted cabbage is more popular. Skipping the processes of washing, cutting and salting cabbage saves homemakers a lot of time and energy. Cabbages are salted right in the region they’re harvested, so all the consumers need to do is taste various samples and choose a region of their liking.

(Woman 1) This radish is good. It’s crunchy. I bought 50 heads of Haenam cabbage because they are known for their crunchy texture. They’re high quality and quite affordable. I bought three boxes of pre-salted cabbages.
(Woman 2) I’m making kimchi with about 20 heads of cabbage. The cabbage price is lower than last year’s, but the quality is really high.

Vegetables are not the only crucial ingredient for kimchi. Salted seafood or fish sauce is essential to making flavorful and tangy kimchi. Seafood and fish markets around the country start getting busy in October. Many special festivals open every week in Seoul as well, starting with the Mapo-gu Shrimp Sauce Festival on October 17. Here’s Mr. Kim Jong-won in charge of the Mapo-gu Shrimp Sauce Festival. 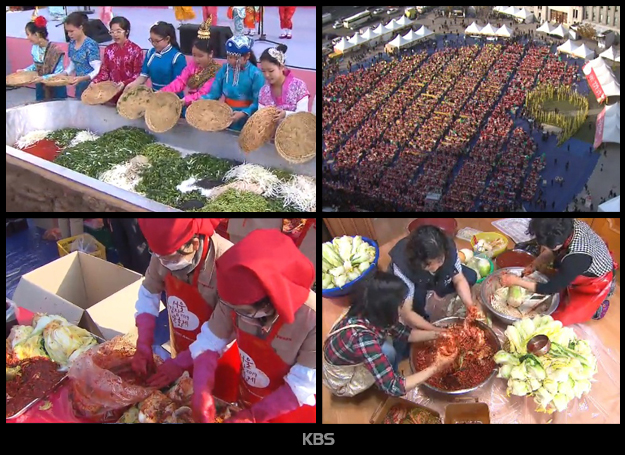 We get shrimp sauce from Gwangcheon, Ganghwa Island, and many other places. The sauces are all carefully selected, top-quality products. You can buy the best-tasting shrimp sauces 20 to 30% cheaper than in retail stores. Even the best quality sauce isn’t priced higher than 50 dollars.

Seafood sauce is crucial to kimchi, because it determines the kimchi flavor. Shrimp sauce is the most largely used sauce in kimchi, but that alone comes in many different types. For instance, yukjeot, or June shrimp sauce, uses white, plump shrimps measuring about four to five centimeters caught in the lunar month of June. This is the best kind of shrimp sauce, but also the most expensive, so people often use shrimp sauces made in May or in the fall. This is the seventh year of the Mapo-gu Shrimp Sauce Festival and its soaring popularity is proven by the number of merchants and shoppers crowding the venue. Just last year alone, roughly 550,000 visitors came to shop for their annual gimjang events and seafood sauce merchants from all over the country showed off a variety of sauces made with their secret recipes.

I sell shrimp sauce from the caves of Gwangcheon. I have many varieties of shrimp sauce, but the top quality product made in May and June is kept in a cave, where the temperatures are kept between 13 and 14 degrees and humidity above 97% all year long. My shrimp sauce is aged in the cave for more than three months.

I came from Imjado Island near Shinan. I have sauces made from anchovies, yellow corvina, and other fishes. Shinan shrimp sauce is famous as well, because the shrimps are fermented with Shinan’s signature product, sun-dried salt.

Merchants worry about the pungent sauce spilling over, but shoppers don’t mind the smell if they can get jars packed to the brim with the essential kimchi ingredient. Their friendly banter and haggling are all part of the seafood sauce festival.

Once the cabbage is salted and the shrimp sauce is ready, it’s time to prepare the ingredients for seasonings that go inside kimchi. Red chili pepper powder, julienned daikon radishes, minced ginger and garlic, and sliced green onions are just the basic ingredients you cannot do without. All these ingredients are combined in one big bowl and the mixture is rubbed between the cabbage leaves. One of the rituals in gimjang is wrapping up a bit of this vegetable seasoning in a tender, yellow inner cabbage leaf. It’s crunchy and deliciously salty and spicy.

This is also the season of kimchi-making volunteer work. All across Korea people volunteer to make kimchi for those who cannot afford to make gimjang kimchi. On November 1st, the Mapo District Office sponsored a charity event to make 2,000 boxes of kimchi for 2,000 low-income families.

Both locals and tourists took part in the event. Some 400 volunteers ended up making 14,000 kilograms of kimchi. Since there are so many people, it is necessary to check their clothes, complete with gloves and masks, for cleanliness.

Geared up in aprons, sanitary hats, plastic masks, and rubber gloves taped up to prevent them from sliding down, the volunteers eagerly dive into work. But no matter how hard they work, the mountains of cabbages and seasonings don’t seem to be getting any smaller. Nevertheless, they’re all smiles and enthusiasm as they think about the people glad to receive gimjang kimchi for the winter.

(Woman 1) I’m glad that I can share this with needy people.
(Woman 2) I used to get kimchi from others all the time, but this is better now that I’m making kimchi for someone else.
(Woman 3) I think it’s true that helping others makes me a better person. This kimchi is going to be made with loving care.

There were some Swedish women at the event who admitted to making kimchi for the first time. They claimed that their favorite Korean food was kimchi, but their hands move awkwardly to stuff cabbages with the red, spicy seasoning. Still, they never complained about the hard work and even seemed to enjoy the whole atmosphere.

(Woman 1) This is my first time making kimchi. I like spicy Korean food. Kimchi goes well with any kind of food.
(Woman 2) I got information about this kimchi event at the hostel I’m staying in now. I came here to experience Korean culture. This is so delicious.
(Woman 3) It’s really fun. It’s nice that I get to learn how to make gimjang kimchi. I’m going to try it when I return to my home. It’s also nice that I get to help other people through such a charity event.

Gimjang is hard work, and people often end up with aching backs and stiff arms and legs. But seeing jars of kimchi lined up is a reminder that it’s a very rewarding experience. And the thought of enjoying that spicy and tangy kimchi all winter long is enough to make your mouth water.
Share
Print
List