Share
Print
A woman grabs a skewered fish cake as soon as she steps out of the cold and into a cozy pojangmacha, a tented food stall on wheels. A big smile spreads on her face as she enjoys the hot broth and filling fish cake. In the big pot of fish cake soup, big chunks of daikon radish, kelp and pollack heads float to add flavor, and pepper seeds are added to give a kick to the stock. Just a sip of the broth warms you up from the inside. But fish cake soup is not the only good thing to eat in a pojangmacha. There are sundae or Korean sausage being steamed next to the soup, and ddeokbokki, Korean teenagers’ favorite snack of rice cake smothered in a thick, spicy sauce. Dipping a piece of sundae in the ddeokbokki sauce is a slice of heaven to most Koreans.

It’s mouthwatering to see a long sundae being sliced expertly by the pojangmacha owner. As soon as a plate of sliced sundae is placed before you, you dip it in the sweet and spicy ddeokbokki sauce and put it straight into your mouth.

(Men) It’s a different kind of taste. It’s so good. It’s very filling. You can only appreciate it in the winter.

But your eyes soon wander over to a stack of small gimbap. The triple combination of ddeokbokki, sundae, and gimbap has earned its own name, gimddeoksun. The streets of Korea in winter are engulfed in hot steam and enticing smells emanating from food stalls.

The Noryangjin neighborhood in Seoul is famous as an enclave of private academies. There are hakwons for just about every exam – from college admissions and civil service exams to police recruitment and teacher appointment tests. The view from Noryangjin Station is filled with signs of numerous hakwons. But just as numerous as these hakwons are pojangmachas catering to hungry students streaming out of those academies. Since these students range in age from teens to 20s and 30s, and live on tight budgets, the food stalls offer menus that are affordable and filling. And “cup Bap” fits that bill perfectly.

The “cup bap” sold in the food stalls of Noryangjin is actually a bowl of rice topped with your choice of meat and vegetables. The toppings include spicy pork, tuna, ham, cheese, bulgogi, and more. You may think it’s similar to Korea’s iconic bibimbap, but the sauce from the topping seeps into the rice at the bottom, so you don’t need to mix it at all. A bowl of cup bap only costs around 3 dollars, so it’s cheap, delicious, and hearty. 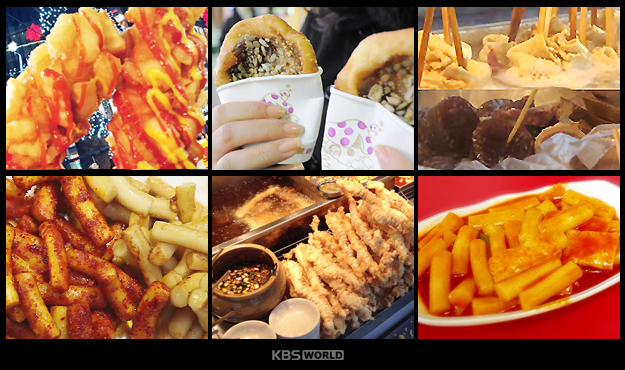 (Man 1) It’s much better than a 5 or 6-dollar meal office workers typically eat. If I look more carefully, I can find somewhere much cheaper. It’s so good.
(Man 2) Galbi and kimchi pork. It’s cheap and delicious.
(Man 3) I only eat bacon cup bap. I come here almost every day. It’s really cheap, cheaper than a Chinese restaurant or a gimbap place, and its portions are big. The food stall owner is really nice, too.

While cup bap is a popular entrée, the hottest snack in Noryangjin is pancake. At just under two dollars, the Noryangjin-style pancake is not served flat with maple syrup like in the United States, but instead, wrapped around delicious fillings like ham and sausage.

(Woman) This line is for the pancakes. It’s so famous in Noryangjin that you have to wait in line. It's delicious and cheap. You can see the pancakes being made and there are so many varieties. It’s just as good as people say.

Since the customers are largely students living on small allowances, the price of these pancakes has stayed the same for many years now. And the owners of the cup bap or pancake stalls intend to keep it that way.

If a student with very little money comes, I tend to give him a little extra. That’s my way of showing that I care. Students live on allowances that their parents give them, so they don’t want to waste even a dollar. It would be nice if I charged more for the food, but this is not a short-term business. I have to be in business for a long time, so I can’t be stingy or expect to make a lot of profit. I’m sure things will get better in time, because the students know how I really feel.

Students of Noryangjin, stressed from studying and in need of comforting words, find solace in the street food and the food stall owners who relate to their hardships. Compassion and warm tenderness are served with food on the streets of Noryangjin.

Greetings in several languages are a norm in this Chinese stall in Myeongdong, central Seoul. Bustling with foreign tourists and shoppers all day long, even street vendors know how to say simple phrases in various languages.

I know phrases in Chinese, French, Vietnamese, Cambodian, Laotian, English, Japanese, Russian… I know so many it gets confusing. I’m also learning Indonesian, Thai, Arabic, German, and Brazilian words. I know 12 or more languages. My customers teach me. They are my language teachers. I’m really thankful that they correct my mistakes, too.

The stall doesn’t offer the ordinary, run-of-the-mill jjajangmyeon. It serves the old fashioned version from the 1970s.

I use large chunks of potatoes, cabbages and onions. This business wouldn’t do well if I thought the same way as others. I would have no competitive edge if everything was the same as others, especially because I run a food stand. This stall needs to be advertised as a good jjajangmyeon place.

Greetings in foreign languages and the specialized 3-dollar jjajangmyeon made this food stall one of the busiest places in Myeongdong. 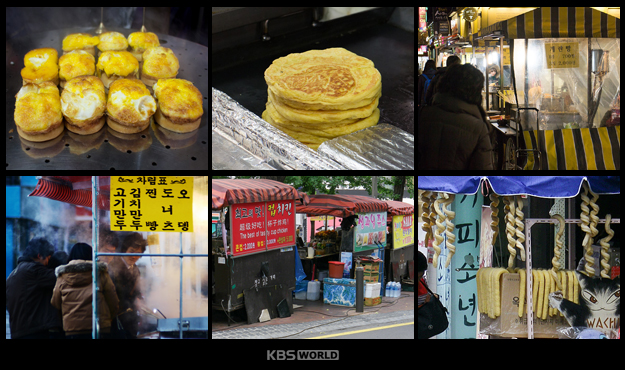 (Man 1) I didn’t know it would taste so good. The price is good, too.
(Woman 1) It’s really convenient and good. It’s a great value for the money. Cheap and delicious.
(Woman 2) This food stand is really good. I come here often. It’s a good place to grab a bite.

It’s almost agonizing for both the locals and foreigners to resist the tempting smells wafting from some 120 food stands in Myeongdong. There is an especially long line of people in front of one food vendor, making a special treat.

(Man) They’re egg cookies. The ingredients are eggs, milk, chestnuts, and flour. Eggs take up about 70% of the dough. I let the mixture stand for a day and make something like egg bread out here. People love them.

What comes out of the oven resembles a carton of eggs. No wonder the golden brown, bread-like cookies are named egg balls. They’re cute and delicious.

(Man) They look just like eggs.
(Woman) I came to try them, because they looked different. I bought some out of curiosity, and they’re cheap, too.
(Man) It’s crispy on the outside and soft on the inside.

Next to the egg ball vendor is a food cart selling bungeoppang, Korea’s popular wintertime street snack of fish-shaped bread with sweet red bean filling. But unlike ordinary bungeoppangs, these are mini pastries, just big enough to get a taste. Although they’re small, the outside pastry is made with sticky rice to enhance the chewy texture and the filling contains lots of nuts to give it crunchiness and nutrients.

I eat lots of street food, so having big portions is too much for me. These are small, so they’re easy to eat and not so filling. I eat the tail first. They’re so crispy.

A waft of fish soup aroma entices people to a fish cake soup pojangmacha. There are countless food carts selling fish cakes, but this one in Myeongdong is different, because their soup stock is flavored with tons of bean sprouts.

The pojangmacha owner says the bean sprout fish cake soup was developed for Chinese tourists who like mung bean sprouts. The crunchy texture of the sprouts adds an interesting aspect to the softness of the fish cakes and the addition of bean sprouts makes the soup stock more flavorful. Now it’s popular among Koreans as well.

All the food sold at street carts looks so good that it’s hard not to try one of everything, leaving you feeling quite full before long. But there’s always room for dessert! So a stop at an ice cream stall is a must.

The owner of this ice cream stand can skillfully make a giant soft-serve ice cream cone standing 30 centimeters tall. You would have to walk very carefully not to have the ice cream plop down on the pavement. You would also have to wolf it down lest it should melt before you can finish.

(Woman 1) It’s tall and looks really tempting. It sure is fun to eat.
(Woman 2) It’s so big that three of us had to share one.

Another street food mecca in Seoul is the youthful, vibrant, and unique Hongdae area. Even the most mundane food undergoes a makeover to be reborn as a special creation.

Moon flower crepe is a crepe rolled up like a flower bouquet. It comes in nine varieties. The strawberry and banana filling is the most popular. Nutella goes into almost all varieties. The pricier flavors include almonds and whipped cream. Our crepes are different from others. They’re made as thin as possible, so they’re crispy and delicious.

The flower bouquet crepe is too pretty to eat, but it’s among the most popular eats for students with a sweet tooth. Another big hit street food in Hongdae is a long, giant waffle measuring 40 centimeters long. Named “long-ffle,” this huge waffle has nuts in the batter and is topped with whipped cream and assorted goodies, like sprinkles and chocolate syrup. You would probably have to bear curious stares from passers-by when walking down the streets of Hongdae munching on a “long-ffle.”

Korea’s street foods are delicious, fun-to-eat and cheap. Winter is the season of street food that warms you up from the inside. How about going out to Myeongdong, Noryangjin, Hongdae or other areas known for street food carts and trying out Korea’s irresistibly tasty street eats?
Share
Print
List