Share
Print
On a Saturday afternoon in December there is a concert underway at Star Plaza on Yonsei Avenue in western Seoul. There’s an event here every weekend and holiday, but this concert is a bit different and special. It’s taking place in a double-decker bus.

The exterior of the red double-decker bus standing at Star Plaza resembles a bus wearing headphones and listening to music, and its bus entrance is made to look like a cassette tape. Its mere appearance triggers the curiosity of passers-by and draws them inside.

As soon as people enter the bus, they see old records and CDs hung on the walls along with sets of headphones. They are invited to wear those headphones and listen to songs of their choice.

(Woman 1) I like Hahn Young-ae so the first song I listened to was her “Isn’t There Anyone.” It’s an old song, but it still sounds very sophisticated.
(Man 1) I listened to “Alleyway” by Sinchon Blues, and a song by the male duo Sunflower. I remembered my younger days and enjoyed reminiscing. I think Play Bus connected the past and present.
(Woman 2) It’s nice that the albums are displayed so that we can listen to their songs. I think this shows what Sinchon Play Bus is all about. 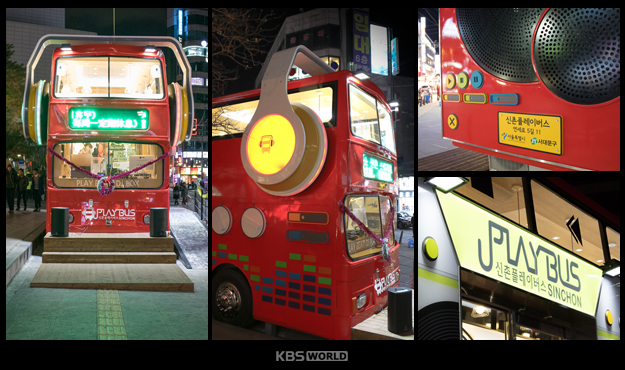 For about five months we had discussed remodeling a double-decker bus to make a landmark that has a unique story. We talked about it with local residents and gathered materials, and concluded that music was the story that best defined Sinchon. That’s how we came to make this music bus. Music can help bring together people of all nationalities and generations as one. There are so many music pieces and songs about Sinchon that we thought it would be fun to introduce them here.

The Sinchon area has four prestigious universities – Yonsei, Ewha Womans’ University, Sogang and Hongik. Young, vibrant people with dreams of the future have walked the streets near these universities from the 1960s through the 90s. Youthful passion and hopeful dreams could be felt in every corner of the neighborhood. Here’s Director Hahn Gil-woo of a Sinchon cultural group named “Mueonga.”

The Sinchon neighborhood represented the spirit of the time. In the 1970s Sinchon was the hideout for the musicians who opposed the military regime. During the 1980s and 1990s attic cafes began to show up and they provided young people with venues to come in contact with, absorb, and create new cultures. They were also the cradle of youthful culture that resisted dictatorship by fighting out in the streets. Sinchon was the vanguard of new cultures and the symbol of youth.

Alleyways in Sinchon were dotted with small bars and music cafes, where young people would gather to share their anguish and immerse themselves in music. Ever since live music cafes became popular, young musicians would frequent those places to show off their musical talents. Nadeul, a member of a male duet named Weather Forecast, shares some fond memories about Sinchon.

After I graduated from Hongik University’s Art College, I set up a studio across from the university. Sinchon was my playground. Back then there were lots of places around the area to have fun and play music. Although most of the places were not equipped with proper audio systems, many cafes behind Ewha Womans’ University allowed singers to play their guitars and sing freely. The legendary Kim Gun-mo used to sing there. His career began in the coffee shops near the Sinchon Railway.

Nadeul’s music was shaped in Sinchon and many important events in his life took place there, like meeting his first love and getting his heart broken for the first time. So Sinchon always occupies a special place in his heart.

My girlfriend used to go to a college in Sinchon, so we met in Sinchon all the time. There was a joint collegiate yodeling club and its members used to gather in Sinchon and sing. Sinchon was the basis and main venue of collegiate life.

Nadeul included the word Sinchon in Weather Forecast’s signature song “I Like, I Like” because of that unforgettable memory. A rock band named Sinchon Blues originated in Sinchon. Its members first formed the band at a Sinchon coffee shop called Led Zeppelin in 1986 and inserted Sinchon in the band’s name. Another rock group called Postman even released a song titled “I Can’t Go to Sinchon,” which sings of a man who is afraid of running into his ex-girlfriend there.

Some corners of Sinchon still retain the old nostalgic cultures of decades ago. For example, the coffee shop Minerva, which served as the favorite meeting place for literary figures in Sinchon.

There weren’t that many coffee shops back then. Minerva started as a café that sold brewed coffee. Minerva stirred up excitement when it first opened, just as franchised coffee shops did when they first appeared in the late 1990s. We brewed our coffee differently and the chairs and tables were lower than in other coffee shops and the ceiling was made of wood to let the music flow better, and we only played classical music. That’s been our way since the beginning. I heard that’s what drew musicians and writers to our coffee shop.

Minerva brewed coffee using the siphon vacuum method. A round glass carafe with water is placed above an alcohol lamp and when the water inside the carafe boils, the hot water is forced up to the upper orb, and there, it mixes with the ground coffee. Then the heat is removed to cool the evaporated water and the brewed coffee is pulled through a filter back into the glass carafe. This coffee-brewing method is certainly fun to watch. Also, the interior of Minerva has remained the same as forty years ago, providing a comfortable and familiar ambience to its customers. 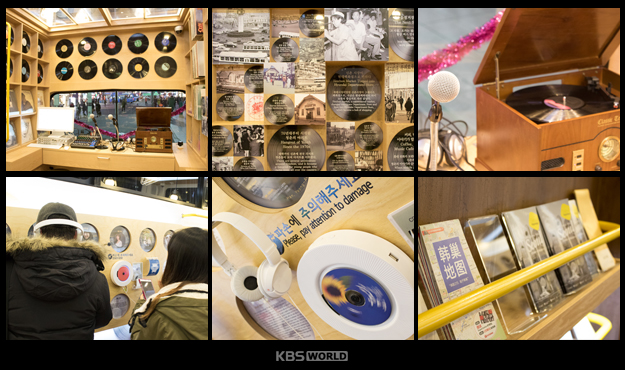 (Man 1) The entrance is hard to find, because it’s not out toward the street. But it’s nice here, since it’s not crowded. The atmosphere is antique and classic. I like the old-fashioned ambience of this café.
(Woman 1) I’ve heard how famous this coffee shop was since I started college. I can listen to classical music in old and rather nostalgic surroundings.

Young writers attending college in Sinchon used to hang out in Minerva all the time. It seems we can still hear the sound of their heated debates echoing through the café. Here’s Minerva’s owner, Mr. Hyeon In-seok again.

When I was a customer of Minerva, I liked its inviting and comfortable feel. It’s small, but has many loyal customers, which is how I can keep the shop open. Its former owners loved this coffee shop and had always handed it over to someone who could keep it the way it was. I also got its old manuals and equipment from the owner before me. I owe it to our loyal customers and former owners for preserving the atmosphere of the 1970s. It feels like time has frozen inside the café and their devotion has made that possible.

The station was built in 1920, five years earlier than Seoul Station. The Gyeongui Line was Korea’s first railway, stretching from Seoul to Sinuiju in what is now North Korea. It was built in 1906 by the imperial Japanese government. Sinchon Station occupies an important place in Korean history, since this is where the Japanese military used as a hub to send supplies north during the Sino-Japanese War that began in 1937.


The old Sinchon Station was replaced by a new building in 2006. The commuter train that connected Seoul to Ilsan, Paju, and Munsan was also turned into an ordinary subway train in 2009. Sinchon Station is now being used as a tourist information center and a community center for local residents. People can even see the photos of the old Sinchon at the station. Here’s Mr. Kim Seung-ho of Sinchon Tourist Information Center once more.

The old Sinchon Station building features old photos of such nearby landmarks as Dongnipmun or Independence Gate, built in 1896, Seodaemun Prison, the ancient Buddhist temple of Bongheon-sa and Yeongcheon Market. These are pictures of Korea’s contemporary and modern history.

Sinchon used to symbolize music and youthful passion, but as college students became more focused on acquiring certificates and getting jobs, the neighborhood came to gradually lose its romantic aura and distinct character. But that’s exactly when Sinchon Play Bus was set up. Now people who were disappointed to see Sinchon undergo such dramatic changes can dream of the resurrection of the old Sinchon. Even the Seoul city government lent a helping hand to bring this project to fruition and rock band Sinchon Blues joined the opening ceremony of Sinchon Play Bus.

Sinchon Play Bus is divided into three zones. The first zone, named “Welcome to Sinchon,” is immediately beyond the cassette tape-shaped entrance. This is where visitors can get information about the music they want to hear. Ms. Jin Ok-hyun from the Seoul Metropolitan Government’s Tourism Policy Division tells us more.

Visitors can leave their comments on a video guest book at the information desk. They can even send messages to their friends’ email or Facebook accounts. This is a very interesting place.

The second zone is where people can enjoy Sinchon music. Equipped with a DJ box and internet broadcasting equipment, this is where people can listen to all the music they want and music professionals can air their own programs. There are some 150 vinyl records and CDs and right next to them is information about the signers and songs. It’s only natural for visitors to travel back to their younger days. The Sinchon music experience zone inside Sinchon Play Bus is a bridge that links the older generation with the younger one. The last zone is the DJ booth. Professional music DJs can also show their skills at the music booth provided inside Sinchon Play Bus. Ms. Jin Ok-hyun from the Seoul Metropolitan Government explains further.

A DJ mixing machine is set up inside Sinchon Play Bus for professional musicians. They can use the DJ booth by reserving it in advance. The booth resembles an old-fashioned coffee shop, so people can take pictures in front of it as well. The rule is one podcast per day, so people can listen to the broadcast online or even take part in the program and talk about Sinchon when a show is underway.

Sinchon Play Bus has become a new attraction in Sinchon. People can travel down the memory lane to remember the old Sinchon through many of its pictures and old music, and discover the new Sinchon through its past. Sinchon Play Bus is certain to become a focal point for all generations to bond together under the name of music and culture.
Share
Print
List