Share
Print
A lively performance of janggu, gongs, and drums – that’s nongak. The cheerful and infectious beat created by a nongak band automatically makes people jiggle their shoulders and clap their hands to the rhythm. The combined energy of band members and spectators crests at the finale when nongak performers play a whirlwind of percussion music to the cheer and applause of the onlookers.

For thousands of years Korea’s nongak has given energy to anyone who listened. The iconic performing art was finally inscribed as an intangible cultural heritage on November 27th at the 9th session of the Intergovernmental Committee for the Safeguarding of the Intangible Cultural Heritage held in Paris.

With the inscription of nongak, Korea now has 17 intangible cultural heritages listed with UNESCO, which include the royal ancestral ritual in the Jongmyo shrine and the accompanying ceremonial music; the folk song genre called pansori; the Gangneung Danonje festival; the ganggangsullae dance; the Korean folk song Arirang; and the annual kimchi-making practice of gimjang. Apparently, UNESCO authorities have given high marks to the dynamism and communal spirit of nongak, according to Ms. Song Min-seon of the National Intangible Heritage Center.

UNESCO recognized that nongak is a living, breathing cultural heritage that has been passed down for generations and is still actively performed today. Nongak has been continuously reinvented with communities interacting with their surroundings, natural environments and histories. Emphasis was placed on the fact that nongak is still practiced and enjoyed by Korean communities and that Korean people are very proud of this tradition.

Nongak is performed to cheer people up and energize them up when working out in the field or celebrating a traditional holiday. It was often used for village ceremonies and festivals to ward off evil spirits and bring good fortune.

Nongak tunes vary by village and region, but the genre is generally divided into five cultural regions – Gyeonggi-Chungcheong nongak; Gangwon-Yeongdong nongak; Yeongnam nongak; left Honam nongak; and right Honam nongak. But even in these cultural regions, each village would have different performing methods, band compositions, costumes and props. There are so many different versions of nongak that it’s hard even to make an accurate tally. However, the Korean government has designated six of them as important intangible cultural assets. Those are Jinju Samcheonpo nongak; Pyeongtaek nonagk; Iri nongak; Gangneung nonak; Imsil Pilbong nongak; and Gurye Jansu nongak. Then there are 25 more nongak renditions designated by city or provincial government as regional intangible cultural assets. As for the recent UNESCO inscription, nongak from all five major cultural regions was designated as an intangible cultural heritage for humanity.

To celebrate the UNESCO inscription of nongak, the National Intangible Heritage Center in Jeonju is hosting a special exhibition entitled “Nongak, the Ecstatic Excitement of Humanity.” Here’s NIHC’s researcher Choi Suk-gyeong to tell us more about the exhibition. 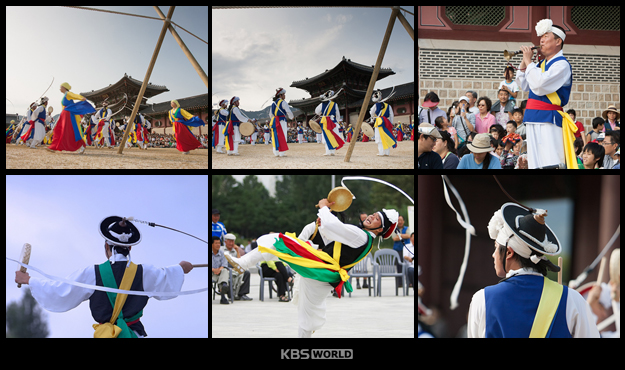 The exhibition features six themes – three are related to UNESCO heritages and three are about nongak. Nongak is important, but we’ve allocated three sections for other UNESCO cultural heritages for humanity to enhance our understanding about UNESCO and introduce intangible heritages from other countries around the world. Also, Korea has 16 other UNESCO intangible cultural heritages besides nongak and we set up a section to give more detailed descriptions of each one of them.

The special exhibition is divided into six theme-based sections, including one about the importance and significance of UNESCO Intangible Cultural Heritages for Humanity and how nongak became a UNESCO cultural heritage. Immediately after that section is one about other cultural heritages similar to nongak from around the world. Stories about Korea’s nongak are featured in the third area. Here’s NIHC’s researcher Choi Suk-gyeong again.

We wanted to introduce the various functions of nongak. It’s not just a performance like many people tend to think. Traditional nongak was performed when villagers carried out shamanistic rituals to wish for the village’s well-being, to encourage participation in community fund drives, or to celebrate traditional holidays like the first full moon of the lunar year. Nongak has been deeply ingrained in people’s lives. We were sad to see nongak pigeonholed into a performing art genre, so we wanted to show how nongak was used for various purposes in our lives.

Nongak was a labor-encouraging music generally played when farmers worked out in the fields, but it has been a part of Korean people’s general lives for a long time. So the third section of the exhibition aims to tell about the various roles played by nongak in our lives. This section also features key props used by nongak bands. While nongak bands may use similar musical instruments and props, their designs and fabrication methods reflect different regional characteristics. Researcher Choi Suk-gyeong tells us more.

The basic plots and purposes may be very much alike, but the costumes and props differ slightly. For instance, band members of Imsil Pilbong nongak put red fabric over their hats and those of Jinju Samcheonpo nongak wear tiger masks. In other folk performances, a hunter shoots at a tiger to symbolize the act of chasing away evil spirits, but in Jinju Samcheonpo nongak the hunter himself is the tiger. That’s what distinguishes this regional nongak from others. Now, this is a hunter cap used in Iri nongak, decorated with pheasant feathers. These props were usually made by band members themselves.

The next section introduces different nongak versions played under different circumstances. The most well-known one is nongak played during a Dangsan-gut ceremony, which is a shamanistic tribute paid to village gods.

A rural village has been recreated for this section. Two wooden totem poles are erected at the village entrance and the recorded video and music of Dangsan-gut is played once you enter the village. In the old days each village had an old tree or a big boulder that supposedly protected the village. Villagers would pay tribute to these village guardians to wish for the villager’s well-being and prosperity, and nongak was played to entertain them. This video shows a portion of Dangsan-gut where nongak plays the main role.

Dangsan-gut is a village ceremony offered to the Dangsan god, who watches over the village, to ask for the village’s peace and prosperity. After the ceremony is over, a nongak band travels through the village to play music and visit each home. The loud sound of musical instruments chases evil spirits away from the homes and invites good fortune. A special video shows in detail how the Dangsan-gut ceremony is performed.

During the home blessing visit by a nongak band, the most important part of the house is the kitchen. So the special exhibition features a kitchen designed just like the traditional one in a rural village.

There is a kitchen god called Jowang-sin. The recreated kitchen features a bowl of water placed right in the center of the stove. It is offered to the kitchen god. Kitchens usually have both water and fire inside, and in the old days it was important to keep the fire going throughout the night. So the first thing Koreans did when they woke up in the morning was to check the fire and offer a bowl of clean water. This section shows a video of how a nongak band performs for the kitchen god.

After traveling through the village, a real celebration for all villagers takes place.

The last part of the exhibition demonstrates how Korea’s traditional nongak has been preserved and passed down. The roles and importance of nongak have diminished over the past few decades as Korea underwent rapid urbanization and modernization. However, nongak has survived and is still being performed in many schools, communities, and festivities.

In traditional villages, nongak’s role was to bring the community together. But these days it’s regarded more as a cultural activity promoted in after-school curriculums or as a part of traditional music education. There are various ways to learn about nongak outside of classroom as well. There are nongak classes for the general public and in universities. This section shows ordinary people taking part in nongak bands.

Nongak is a traditional cultural heritage that still thrives and blends well with modern life. This is what UNESCO took note of when designating it as an intangible cultural heritage. Here’s Professor Park Sang-mi of Hankuk University of Foreign Studies’ Division of International Studies.

People usually think of nongak as a part of fixed traditional culture, but in Korea nongak is an evolving art form. There are nongak bands in schools, companies, and urban and rural communities. Nongak has become a part of our lives, shifting in form to suit the changes and circumstances of each community it belongs to. Its endurance was what helped nongak become a UNESCO cultural heritage. They have recognized that Korea’s nongak still occupies an important place in our lives.

Take only the music part of nongak and you have samulnori. It’s a music genre derived from nongak, which is now a widely recognized Korean music even among foreigners.

Right next to the exhibition hall, visitors can actually learn how to play the musical instruments used in nongak. These visitors are learning the basic beat, but it’s not as easy as they thought.

After an hour-long lesson, they try playing the music together. Although out of sync and awkward at first, they end up making rather decent music.

Nongak music can be learned easily by just about anyone, which is why it has been the most accessible and vibrant way to entertain and energize Koreans. Here’s Professor Park Sang-mi of Hankuk University of Foreign Studies once again.


A cultural heritage shines when it retains its value and force regardless of time and space. In that sense, Korea’s nongak was highly regarded as a communal culture in the past and is enjoyed as a branch of traditional performing arts today. It has survived and reinvented itself over time. Two more of Korea’s cultural traditions are up for UNESCO evaluation – juldarigi or traditional tug-of-war in 2015 and Jeju Island’s haenyeo or women divers in 2016. The world will become much richer culturally if these two heritages are added to the current list of UNESCO Intangible Cultural Heritage for Humanity.
Share
Print
List