The New “Story of Simcheong,” the Return of a Korean Traditional Musical

Share
Print
This is a scene from “Simcheong Is Coming,” the madangnori version of one of Korea’s most well-known folk stories, “The Story of Simcheong.” Much like western musicals, madangnori is a performing arts genre that combines nonstop music, group dance, rapid-fire dialogue filled with wit, satire, and humor, and cheers and laughter from the audience. These elements work in perfect harmony to show what Koreans have been missing. Madangnori has come back after a long, four-year absence.

The theater company Michoo is the originator of the Korean musical, madangnori. After introducing madangnori for the first time in 1981, Michoo’s productions have attracted 2.5 million people over 30 years to become Korea’s signature performing arts genre. However, madangnori productions stopped in 2010, after delighting Koreans for three decades. Here’s director Sohn Jin-chaik to explain why.

Traditionally, madangnori was a folk entertainment performed for communities. We began performing it after naming it madangnori in 1981. We thought at the time that producing madangnori performances for 30 years would mean that the first generation of madangnori producers had been in power for too long, which would make it difficult for a new generation of actors and staff members to join. So we wanted to leave with applause at the crest of popularity and give the momentum to the new generation. The first 30 years came to an end, but we had hoped that a new generation would continue the tradition.

The original madangnori producers wanted younger actors and directors to take over, but nobody stepped up. That’s why no more madangnori productions were made for four years. But the National Theater of Korea offered to help launch another 30 years of madangnori and for the first time in Korean musical history a madangnori production came to be staged not outdoors, but inside a theater. Here’s madangnori director Sohn Jin-chaik again. 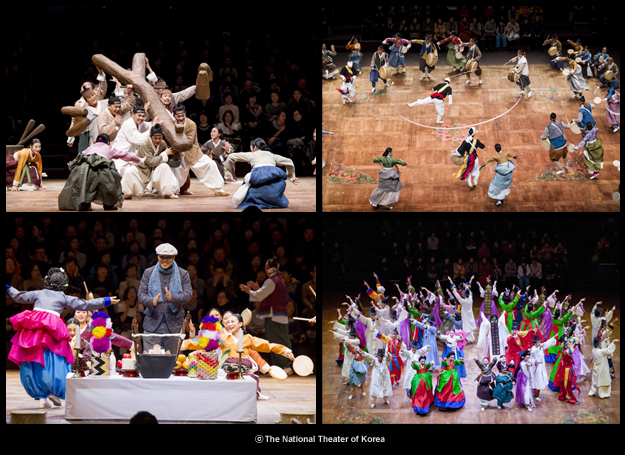 The only thing that’s changed in the new version is the venue. It’s still performed with the audience seated on all four sides of the stage and with full audience participation. Since it’s being performed in a theater, however, we can take advantage of the lighting and props that are usually reserved for traditional stage plays. Also, we draped 11-meter-long curtains around the theater so as to remove the barriers between the stage and audience and bring them closer together like in traditional madangnoris.

Temporary seats were added on the stage to recreate the traditional madangnori venue, in which all four sides can see the center of the stage. Also, 11-meter-long curtains are placed around the 1,500-seat theater to recreate the ambience of a big-top tent. The new madangnori version of “Simcheong Is Coming” also plays videos at certain points to play up the appeal of the theater-type madangnori. Now let’s go see the fun-filled madangnori production that has been delighting audiences at the main performing hall of the National Theater of Korea since December 10th.

The performance begins when actors appear with a band playing taepyeongso , a Korean traditional wind instrument. They each make opening remarks, which generally make fun of the world.

They claim to have turned a blind eye to the irritating and nonsensical things happening around the world, but insist on welcoming the audience. Even that short opening sequence makes the audience break out in laughter.

The madangnori production is energetic and merry from the very beginning. Anticipation for the next two hours builds among the audience, causing everyone to lean forward and keep their eyes on the actors. Why was “The Story of Simcheong” chosen as the first production of the new madangnori?

We realized over the first 30 years of madangnori that it can make people not only laugh, but also cry. We saw that Koreans loved “The Story of Simcheong.” She sacrifices herself to save her father and everyone else. At this point in time when everything is so confusing, we thought that the world needed someone like Simcheong to save us all. So we chose Simcheong to impart that feeling of a savior.

Simcheong offers herself to be a sacrificial maiden to the sea god in return for 300 sacks of rice so that her blind father would get his sight back. Heaven is moved by her love for her father and not only restores the father’s sight, but also lets Simcheong live. This is an iconic folk story that emphasizes filial love. However, just transferring the story exactly as it is to the stage no longer excites today’s theater-goers. Modern sentiments and trends are incorporated into the play to draw out explosive responses from the audience. A case in point is the scene where the blind father begs for breast milk to feed baby Simcheong.

Can you imagine how pathetic it must have been for a blind father to beg for breast milk to feed his baby daughter? But this madangnori version doesn’t make him look too pitiful. Here’s actor Song Jae-hyung who plays Simcheong’s father.

The script has included today’s cultural trends and customs. You know how instant mobile messaging services are hot these days? Well, there’s a part where mothers open a chat room to inform others about Simcheong’s plight.

So Simcheong grows up with the help and breast milk of generous mothers who have come together through a social media service. She turns 15 and one day her father promises a Buddhist monk that he would donate 300 bags of rice so that Buddha would restore his sight. Simcheong, a loving daughter, sells herself as a sacrifice in return for the rice so that her father can honor that pledge and throws herself to the rough sea.

The scenes in which Simcheong throws herself into the sea, or is taken to the underwater palace of the sea god, or returns to this world on a lotus blossom, all demonstrate the merits of staging a madangnori production in a theater. Videos of underwater scenes and the blossoming lotus flower are projected on the curtains draped around the theater to create the realistic ambience. This is what separates this madangnori production from the ones that came before. Here’s theatrical director Kim Seong-nyeo to tell us more.

Video is played on the entire theater. If the background is underwater, fish swim around the audience. If a scene takes place inside a lotus flower, it blooms all around the theater. The images play a big part in explaining what is going on in the story and brings the audience into the play. These mechanisms are what set this madangnori apart from the conventional ones.

But no matter how spectacular the stage production is or how well actors perform, the key to the success of a madangnori production lies in how well it interacts with the audience and invites their participation. Director Sohn Jin-chaik stresses that the most important actor in madangnori is the audience.

Once the curtains go up ordinary stage plays can go on even when there are only a few people in the audience. But that’s impossible with madangnori, because communicating with the audience is what defines the Korean traditional musical. So we don’t think of the audience as simple spectators of our show, but as a big cast of players. People can feel what the actors try to convey on the stage by looking at other members of the audience. Feelings and audience reactions can be infectious, so the audience is the most important element in a madangnori production. It’s not an exaggeration to say that audience members are the ones who produce madangnori. That’s how important they are to our show.

Ppaengdeok , the love interest of Simcheong’s father, suddenly grabs a male audience member and evades the blind man’s hyped-up senses to enjoy a tryst. The audience bursts into roaring laughter as they watch the man, flustered and a little bit embarrassed, trying to keep up with the actress. Such audience participation is what makes madangnori more inviting and exciting.

Returned to land on a lotus flower, Simcheong becomes queen and is reunited with her father, who is still blind despite the rice donation and Simcheong’s sacrifice. But when the two embrace, the blind man miraculously opens his eyes to realize that he can see.

Seeing his daughter’s face for the first time, he recognizes the daughter not by her looks, but by her voice. The father and daughter break down in joyful tears.

When Ppaengdeok, the woman who ditched Simcheong’s father, shows up at this heartwarming reunion, he is incredibly upset, but Simcheong tells him to forgive her.

This ending scene is a learning moment for all of us. It tells us that people are people, so they should not be labeled or hated. The moral of the story is to live in harmony and love one another.

This part isn’t actually in the original story of Simcheong, but today’s audience can completely relate to what the show is trying to teach us. Those who have seen this madangnori production are glad that madangnori is here once again to provide them with wholesome family fun. 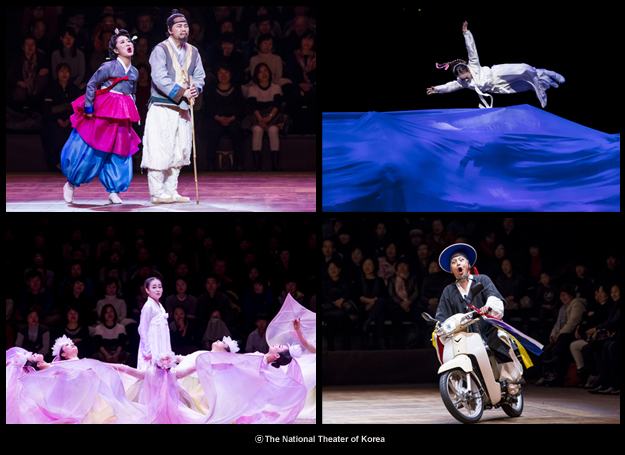 (Woman 1) It’s been very well adapted to today’s sentiments. The show has become very young and fresh, so younger generations would like it, too. There were many new attempts made in the musical, so it was nice to see the show communicate with today’s young people.
(Man 1) I really had fun watching it. It was interesting to see the dancers and actors work together. The plot was well-written and there were lots of things to see.
(Woman 2) It was really exciting and electrifying. The music was catchy and I wished I had a daughter like Simcheong.

The madangnori “Simcheong Is Coming” ends with some 80 cast members coming out at the curtain call to wish every one of the audience members a happy new year. Thanks to these well-wishers, those who have seen the madangnori production look forward to a year filled with good fortune in 2015.
Share
Print
List