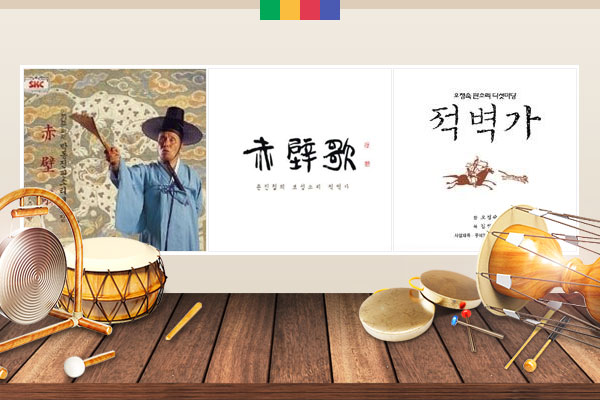 Korean pansori “Jeokbyeokga” or “Song of Red Cliffs” is based on Chinese historical classic “Romance of the Three Kingdoms” written by Luo Guanzhong. This 14th-century Chinese novel, set against the chaotic period at the late Han Dynasty and featuring legendary heroes and villains such as Liu Bei and Cao Cao, has steadily been loved by even Koreans for its description of ingenious military strategies and relatable human interactions.

What sets the Korean pansori version of the Battle of Red Cliffs, a major warfare in “Romance of the Three Kingdoms,” is its portrayal of ordinary, nameless soldiers, who were overshadowed by the main characters’ heroic feats. One such part is where soldiers lament their unfortunate lot in life as they face what is likely to be their deaths in battle.

General Cao Cao raised tens of thousands of soldiers to invade southern China and faced Liu Bei and his men at the Yangtze River. Since he had more men and more heavily armed than his rival, Cao Cao believed he would win big in the impending battle and tried to boost the morale of his soldiers with alcohol. But did the rank-and-file soldiers feel the same way? They had nothing substantial to gain by fighting fiercely and winning, but if they lost, they would lose everything.

So they gathered by the fire to think about their parents and loved ones left back at their hometowns and worry about their future. Here’s the part in “Jeokbyeokga” where a soldier cries over his love for his wife, sung by Park Dong-jin and the drum played by Joo Bong-shin.

Those who wage war are largely those people who had nothing big to lose even if they were defeated. Their families would already be somewhere safe and they would be well-protected by their subordinates. To people like that, the worries and sorrows of ordinary soldiers are probably too trivial to concern themselves with.

Cao Cao also seemed to not care about the well-being of his men, because he went ahead with the battle, cocky with the belief that a victory was a sure thing. But, the wind blew from southeast, fanning the fire set by Liu Bei’s forces toward Cao Cao’s camp. The fiery assault threw Cao Cao’s army into panic and his camp was turned to ashes.

It was Liu Bei’s counsel Zhuge Liang who had devised the strategy to decimate Cao Cao’s forces. The defeated general had to retreat with just what few soldiers that survived the attack. Here’s the part of “Jeokbyeokga” that describes the deadly battle. It’s sung by Yun Jin-cheol with the drum played by Jo Yong-su.

As Cao Cao fled with only a handful of his men, he stopped for a moment to count how many soldiers were left. But that’s when Liu Bei’s men ambushed Cao Cao’s remaining forces. At the end, the proud general knelt before the enemy commander to beg for his life. In the pansori version, this is the part that elicits a lot of laughter.

Cao Cao had the most number of soldiers under his command among all the warlords that appeared in this story, but in this passage he huddled down with the lowest-ranking soldiers and bickered with them over who was to blame for the defeat, acting much like a petty loser. This passage shows that whether you are a hero or a penniless soldier, we are all the same underneath the façade of social standing.

The last piece we have for this episode of Sounds of Korea is this passage where Cao Cao squabbles with his men during his escape. It is sung by Oh Jeong-suk and Kim Cheong-man plays the drum.