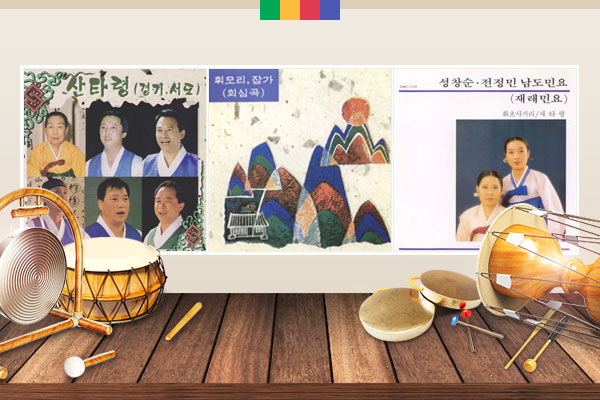 In the Joseon era, a person’s social class was deemed more important than one’s character or capabilities. Thus, the music people listened to was often informed by the social standing in which they stood.

In contrast, folk songs enjoyed by commoners were not called songs, but just “sori,” or “sound.” Sometimes, songs and sori were differentiated by instrumental accompaniment. Such accompaniment required more time and effort from musicians and cost listeners more money to hear performed, which was why jeongga pieces were a rich person’s past time. Meanwhile, poorer commoners didn’t need many musicians or instruments to enjoy their music. They were able to enjoy sori anywhere and anytime, just so long as they had a percussion instrument like a drum or a janggu장구 to keep the beat along with a solo pansori singer.

The first piece we’re going to listen today is Nolryang놀량 from Gyeonggi mountain song performed by Hwang Yong-joo and chorus.

“Nolryang” means “ready to play.” “Gyeonggi Mountain Song” starts with this movement and continues through four different movements. Unlike folk songs that could be sung by anyone, “japga잡가,” or miscellaneous songs, were performed by professionally trained singers.

Japga pieces were not considered as classy as jeongga pieces, but nonetheless call for more expertise than folk songs. Japga are divided into two subgenres: jwachang좌창, sung while sitting down, and seonsori선소리, sung while standing up. Jwachang is further divided into slow and long pieces called “long japga” and fast “hwimori휘모리 japga.”

Now we are going to listen to a hwimori japga. In the old days, singers in Seoul and its surrounding area started off their concerts with gasa or sijo, followed by long japga pieces, before wrapping up their performances with hwimori japga.

Lyrics of many hwimori japga songs were quite witty and satirical. The hwimori japga coming up next is titled “Toad Song,” which allegorized a toad living in the Cheonggye청계 Stream as a person. This is sung by Lee Chun-hee.

In the song, toads croaking on a wooden shoe floating down the Cheonggye Stream were likened to people enjoying entertainment on a boat. Among the toads was one so unlucky that every marriage ended up in the death of its spouse and another that was arrested by police for behaving like a thug. “Toad Song” was an allegory of common people’s lives that were pitiful and humorous at the same time.

During the Joseon period, there were a number of bands that were associated with Buddhist temples. When a temple needed to build a new structure or raise funds for big projects, these bands would tour villages on behalf of the temple and hold song and dance shows for fundraising purposes. This is why the songs and dances enjoyed by commoners were extensively influenced by Buddhism.

That tradition continues to modern times, and dancers may start off their routines with a Buddhist dance and singers with boryeom보렴, or Buddhist songs, which usually wished for peace and prosperity for the country and its people under the benevolent care of Buddha.

This week’s episode of Sounds of Korea will conclude with “Southern Region Japga Boryeom” sung by Seong Chang-sun and Jeon Jeong-min.