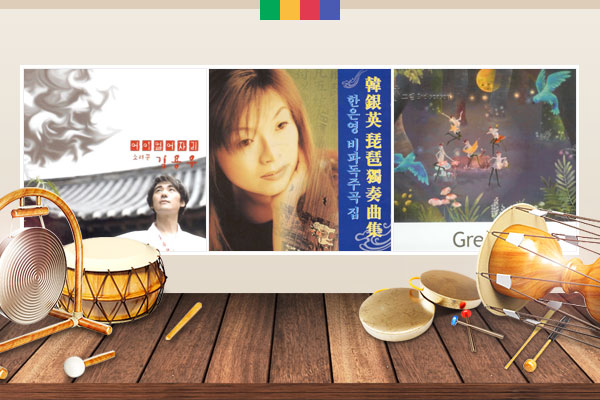 While many people may have heard of the Korean traditional string instrument called the “bipa(비파),” many probably have never seen how it is played. During the Unified Silla(신라) Period, the bipa(비파) was one of the three most important string instruments, together with the gayageum(가야금) and geomungo(거문고). But nowadays people have forgotten how to play the bipa(비파) in the original way. However, some modern musicians came up with a new method of playing and have restored the instrument’s past glory. The bipa(비파) resembles the western guitar or lute in appearance. Its body or sound box is shaped like a teardrop and a short neck supports the strings. There are two types of bipas(비파) in Korea – the hyang bipa(향비파), which is indigenous to Korea, and the tang bipa(탕비파), which originated from China’s Tang Dynasty. The Chinese version has a longer neck that is slightly bent at the end. The tang bipa(비파) is often featured in Buddhist paintings depicting the four guardian gods at temple entrances. The first song we have for this week is “Suyangsanga”(수양산가) sung by Kim Yong-woo(김용우).

In the late Joseon period, there was a famous bipa(비파) musician named Song Gyeong-wun(송경운). He used to be a servant at a nobleman’s house but started learning the bipa(비파) since he was nine years old. He was so talented that he was known nationwide at the age of 12. He was also tall and good-looking and an entertaining storyteller. It wasn’t surprising that he was invited to play at all the fancy parties hosted by high-ranking officials.

He was paid generously for his music in silk and money. After spending several decades playing music and getting ample compensation for his talent, he was able to live in comfort, but the most rewarding outcome was that he came to represent the best in a certain field. For instance, when someone was known as a good archer, people would ask, “Is he as good at archery as Song Gyeong-wun(송경운) is with his bipa(비파)?” Then, the Chinese invaded Joseon in 1627 and Song came to settle down in the city of Jeonju(전주), Jeollabuk-do(전라북도) Province after fleeing the violence. Once he settled down there, instead of playing for others at parties, he began to play for himself. Of course, villagers would sometimes drop by to hear him play and during those times, he would gladly play for them, describing himself as a humble musician. Here’s bipa(비파) musician Han Eun-young(한은영) playing “Chimhyangmu”(침향무) composed by gayageum(가야금) virtuoso Hwang Byungki(황병기).

These days, people who love gugak(구각) or Korean traditional music argue amongst themselves over whether the original versions of gugak(구각) are better than the modernized ones. Similar disputes may have taken place during Song Gyeong-wun’s(송경운) time as well, because he lamented the fact that people in his era liked new songs better than old ones. He thought that old and new songs were simply different, not better than the other. So, he mostly played old songs in his attempt to preserve the musical heritage. But when he saw that only music aficionados were able to appreciate his music and that ordinary people couldn’t have cared less, he realized that good music should make everyone happy, not just a select few. Afterwards, he started including new songs in his repertoire to make everyone enjoy bipa(비파) music. Song Gyeong-wun(송경운) must have been a person who also knew how to lead changes in life trends. For instance, he had a very different idea about death and funerals than his contemporaries. Since he had no children of his own, he called his students to his deathbed to make his last wish. Since his life had been devoted to music, he told his students to make his spirit happy by playing music on the way to the burial. So, when his coffin was taken to the mountain to be buried, his students played their bipas(비파) to make their teacher’s last wish come true. No musician could have asked for a more meaningful and enjoyable funeral. Now the last piece of this week’s episode is “Road” sung by Lee Ja-ram(이자람).