"A Triangular House" by Ha Geun-chan 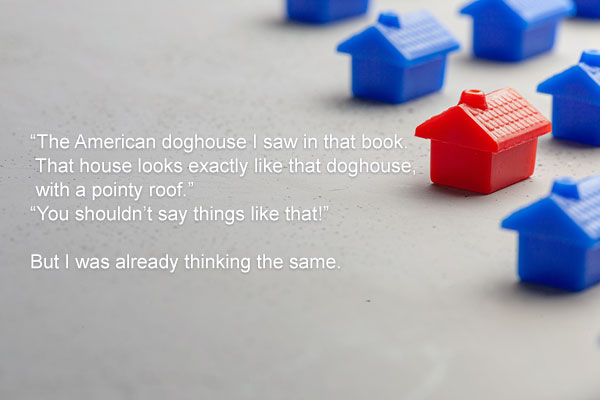 Ha Geun-chan’s “Triangular House” was published in humanities magazine Sasanggye in 1966. In the first part of the story, the main character borrows a book of photographs from his photographer friend and looks through it with his young son, Yeong-il.

“Wow, this looks cool. Father, this is Christmas, right? Christmas in America?”

He was right. It was a picture of Christmas in America.

But the Christmas in the photo was not that of colorful decorations or a party or a church choir.

It was a picture of a doghouse, a large, triangular house.

A small Christmas tree stood next to it and a cross was placed on the roof.

The next day, the narrator’s family went to visit the newly built home of Jong-doo, his wife’s cousin. The new house was located in Miari on the outskirts of Seoul. They got off the bus at the market entrance and walked up a hill for quite a while.

“The American doghouse I saw in that book. That house looks exactly like that doghouse, with a pointy roof.”

But I was already thinking the same.

It was a triangle.

Well, to be exact, this house was a pentagon, like that doghouse in the photo.

What was interesting about the house was its roof. Tarp pieces and black oiled paper sheets were laced together to serve as a roof, but cardboard boxes were used to patch up some spots, perhaps because they ran out of the roofing materials or because there were leaks.

: Debuted with “The Suffering of Two Generations” in 1957

Won an Order of Cultural Merit in 1998