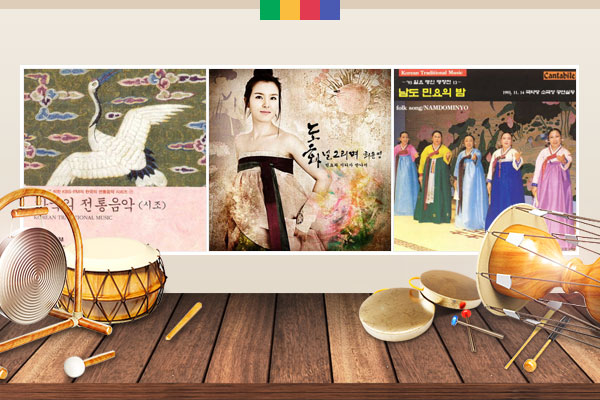 Korean homes used to have a platform for clay urns containing various “jang,” a blanket term for traditional Korean soybean-based sauces like doenjang(된장) and gochujang(고추장). It was important for sunlight to sanitize these containers, but the scorching summer heat could burn the sauces inside the urns, so Koreans from the old days used to build the platforms some place where there was both sun and shade. In most cases, the platforms were built under a large tree in the backyard. There is even a poem associated with the sauce pots and autumn. Written by the poet Kim Yeong-rang(김영랑), the poem “Oh, Fall Colors the Leaves” talks about how a tree leaf fell into a sauce pot as a girl opened it. The poem depicts the girl’s surprise at seeing a persimmon leaf that has already changed color and realizing that autumn has already arrived. The first song for this episode of Sounds of Korea is “Fall Leaves Are Only Half Red” sung by Kim Young-ki(김영기). The lyrics go as follows.

Fall leaves are only half red and the stream is blue.

I have cast a net in the rapids and laid down on the rock.

Perhaps I am the only one who is slacking off.

Music 1: Fall Leaves Are Only Half Red/ Sung by Kim Young-ki

The four distinct seasons of Korea have inspired countless songs over the years. However, some songs have become so iconic with a season that it would be unthinkable to let the season go by without hearing the songs associated with them. For instance, one must-listen Korean traditional song in autumn is “Gwansanyungma(관산융마).”

This epic poem, written by the Joseon-era poet Shin Gwang-su(신광수), was set to the tune indigenous to the Hwanghae-do(황해도) region. Shin’s poem is actually a reinterpretation of the Chinese poet Du Fu’s poem about his trips to various landmarks in China. The Joseon version of the poem starts by describing how a man walked up to a pavilion near the cold and quiet autumn river. The song used to be a favorite of gisaengs(기생) or female entertainers in the western region of Korea. Today, Gyeonggi-do(경기도) folk singer Choi Yun-yeong(최윤영) sings “Chugangi(추강이),” a modern adaptation of “Gwansanyungma(관산융마)”.

The last piece for today’s episode is titled “Heungtaryeong(흥타령),” which translates to “Merry Song.” This japga(잡가) was passed down in the Jeolla-do(전라도) region in southwestern Korea. The term “japga(잡가),” which means vulgar or trivial songs, stood in contrast to “jeongga(정가),” songs enjoyed largely by Confucian scholars and people of high social status. Japga(잡가), usually sung by ordinary people, included such well-known songs as “Yujabaegi(육자배기)” and “Heungtaryeong(흥타령).” Judging from the title, “Heungtaryeong(흥타령)” may be thought of as a cheerful song, but it actually has melancholy lyrics. In fact, the lyrics can be changed depending on the singer. Today’s version, sung by master singer Kim Su-yeon(김수연), begins like this.

I have planted chrysanthemums outside the window

And buried a pot of wine under the chrysanthemums.

The moon rose when the wine ripened

And chrysanthemums bloomed and a friend showed up.

Child, bring out the geomungo(거문고). I’m going to play it all night long.

We hope all our listeners will enjoy music with their loved ones this autumn season. We’ll wrap up this episode of Sounds of Korea with Kim Su-yeon(김수연) singing “Heungtaryeong(흥타령).”