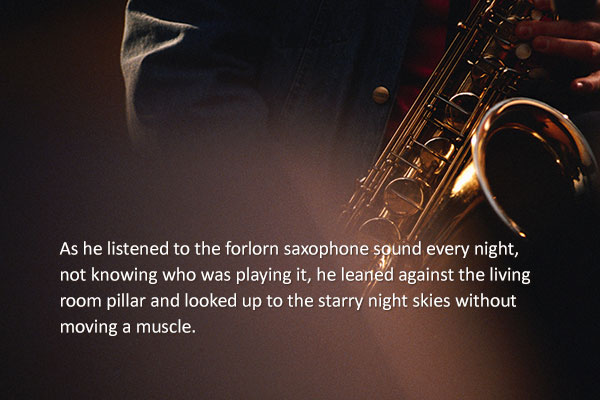 The sound of the waves struck the pillow. He couldn’t fall asleep. The streetlamp, which would have been turned off already if it were any other day, still stayed lit. Something must have happened at the dock. Either something good or something bad.

“Seagull” was published in literary magazine Modern Literature in 1958. It’s a story about how middle school teacher Hoon came to live on the island for seven long years.

Hoon had listened to “Gypsy Airs” yesterday evening as well.

When the lights came on at the island’s two lighthouses and left two long ribbons of red and blue on the water surface, the sound of the saxophone rippled out toward the quiet night sky. The sad, hoarse sound pushed his thoughts back into the past. As he listened to the forlorn saxophone sound every night, not knowing who was playing it, he leaned against the living room pillar and looked up to the starry night skies without moving a muscle.

Writer Lee Beom-seon had also worked as a teacher in Geojedo Island during the war. The island wasn’t specifically named as Geojedo in the story, but Hoon’s life was inspired a lot by the author’s own experiences. Korea during the post-war years was fraught with broken relationships, immorality, loneliness and isolation. But Lee Beom-seon believed that a modicum of human kindness and loyalty remained in people’s hearts and if those feelings were restored, the world would become a much better place. “Seagull” is a story that incorporated the thoughts Lee had while he was teaching in Geojeodo Island.

: Debuted by publishing “Scalper’s Ticket” on Modern Literature in 1955