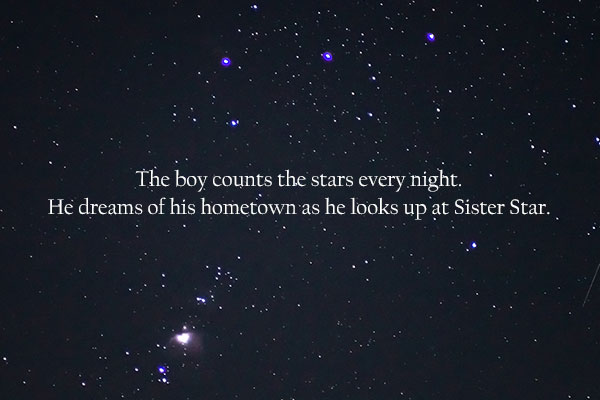 His father woke him up in the middle of the night by grabbing his wrist. He was then led away by his father. That was the night the boy left his hometown with his parents.

When his mother and father returned home, drenched in sweat, and finished dinner, the boy would roll up a straw mat and climb up the hill behind the shack.

He laid down on the mat, looking straight up at the sky, and let the stars fall on him.

The stars were the same as the ones he had seen in his hometown.

The boy’s grandmother told his parents to take only the boy, not the girl. So they fled south while the old woman and the girl stayed behind in the north. “Sister Star” may sound like a children’s story, but it was inspired by a tragic reality. Oh Young-soo wrote about the issue from a child’s perspective and as a psychological trauma.

The boy counts the stars every night.

He dreams of his hometown as he looks up at Sister Star.

He left everything in his hometown. He misses his sister and his home village.

Stars at last settle in the eyes of the boy who looks at Sister Star and longs for his hometown.

: Debuted by publishing “Nami and the Taffyman” in journal Shincheonji in 1949

Awarded the Order of Cultural Merit in 1978, etc.