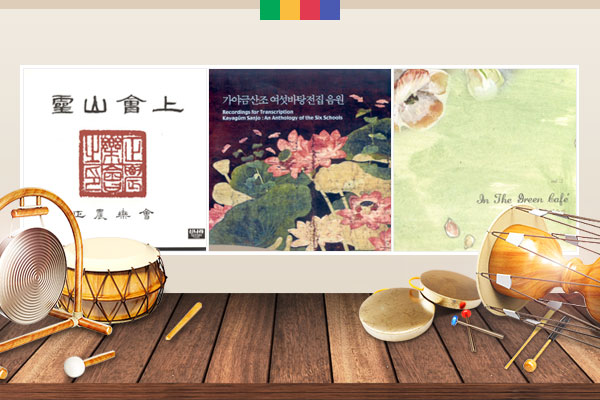 Even those who can’t tell how the sounds of the gayageum(가야금) and geomungo(거문고) differ or how they are played know that the gayageum(가야금) was created by Ureuk(우륵) and that the geomungo(거문고) was made by Wang San-ak(왕산악). Many Koreans believe that Ureuk(우륵) took the instrument from Gaya(가야) to Silla(신라) when he defected but the gayageum(가야금) was first created by King Gasil(가실) of the Gaya(가야) kingdom. In fact, the name “gayageum(가야금)” means the string instrument of Gaya(가야). Ureuk(우륵) was simply a musician who played the instrument at King Gasil’s(가실) order. But he can be credited for spreading the gayageum(가야금) to a wider audience after he defected to Silla(신라). It is unclear what the gayageum(가야금) looked like back then. However, we can assume its shape as several clay figures playing the instrument have been discovered. Judging from the ancient earthen dolls, the original gayageum(가야금) looked very similar to the ones played for jeongak(정악) or court music these days. The most prominent characteristic of the jeongak gayageum(정악가야금) is the “yangidu(양이두),” which refers to two protrusions sticking out like sheep’s horns at one end. These features are also observed in the clay figures from the Silla(신라) period more than a millennium ago. This leads us to believe that the gayageum(가야금) hasn’t undergone much change in its shape over the past 1,000 years. The first piece for today’s episode of Sounds of Korea is a jeongak gayageum(정악가야금) piece titled Sangnyeongsan(상령산) Mountain from Yeongsanhoisang(영산회상) with Kim Jeong-ja(김정자) playing the gayageum(가야금).

In the Japanese royal warehouse, there is an ancient instrument that supposedly originated from Silla(신라). Named the “Sillageum(신라금),” the string instrument of Silla(신라), it resembles today’s jeongak gayageum(정악가야금), but it is a bit smaller in size and has a string attached to it. So it can be assumed that the string was used to hang the instrument over a musician’s shoulder while playing. It is only natural that an instrument’s shape, its playing method, and the music played with it change over time. The gayageum(가야금) underwent a drastic change at the end of the Joseon(조선) era with the emergence of the sanjo gayageum(산조가야금). This instrument is mainly used in folk music performances such as sanjo(산조) or free-style solo and gayageum byeongchang(가야금병창). Folk music tends to have more dynamic tunes and beats than court music. So the sanjo gayageum(산조가야금) was made to be smaller than the jeongak gayageum(정악가야금) in length and width with narrowly spaced strings to allow musicians to play faster and more elaborate music. It is unclear which one begot which, sanjo(산조) or sanjo gayageum(산조가야금), but one thing is certain – Korean music was made much richer with the appearance of the sanjo gayageum(산조가야금). Let’s listen to the Hwimori(휘모리) part of the Choi Ok-sam(최옥삼) style gayageum sanjo(가야금산조) piece with gayageum(가야금) virtuoso Hamdong Cheongwol(함동정월).

Since the gayageum(가야금) was popular among the masses, several attempts were made to improve it. In some gayageums(가야금), the silk strings were replaced with metal ones and the number of strings increased, up to 25 strings in some cases, to make richer sounds. The 25-string gayageum(가야금) is suited to play creative music pieces, since it can produce a wider range of sounds than the traditional version. According to Korean traditional musicians, there is no music a group of 25-string gayageums(가야금) can’t play. Since it’s difficult to perform typical gayageum(가야금) playing techniques such as “nonghyeon(농현)” or sliding the fingers up and down the strings, some people consider the 25-string gayageum(가야금) more akin to the harp of the West. Some people also claim that the usage of synthetic fibers instead of silk strings make the sound shallower. On the other hand, however, some people like the brighter timbre produced by the modern gayageum(가야금).

Perhaps someday we will get to see a new version of the instrument that addresses all these issues. This week’s Sounds of Korea will conclude with Lee Seul-ki(이슬기) playing “Happiness” with her 25-string gayageum(가야금).