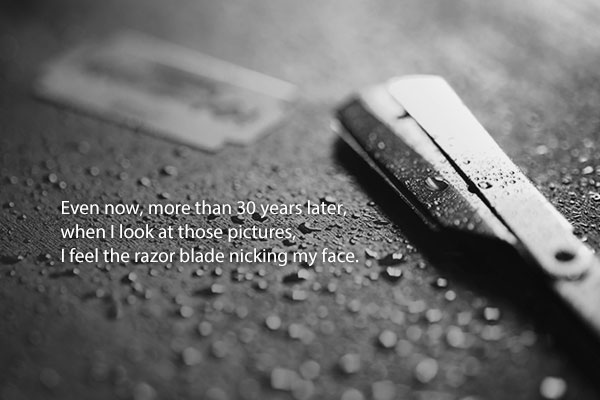 In my old photo album, there aren’t many photographs from the years between my birth and my middle school graduation. The scratch marks from the razor blade stand in place of my face.

Even now, more than 30 years later, when I look at those pictures, I feel the razor blade nicking my face. That feeling eventually leads to the memory of a teenage boy who is tearing up all the photographs showing his face under a dim 30-watt bulb.

The face is not only a part of the body, but also a vessel that shows a person’s identity. The main character of the story had a very difficult childhood and, once a teenager, tried to hide his painful background. It was tantamount to denying his life and identity. This is why he cut out his faces from photographs. “Beautiful Face” is known as Song Ki-won’s autobiographical story. He wrote about his pains and shameful memories experienced during the Korean War and Korea’s industrialization without much exaggeration or white washing. The story feels like listening to him talking about his past as we look at his old photo albums together.

Once upon a time, there was a womanizer. But whenever he was in a romantic relationship, he would humiliate and hurt his lover. He would fall in love with her only after the woman became bloody from all the wounds he afflicted. That rake loved the hurt he had caused rather than the woman. When this womanizer was too young to understand love, he would cut his face in photographs with a razor blade.