"A Black Pot in the Snowman" by Kim So-jin 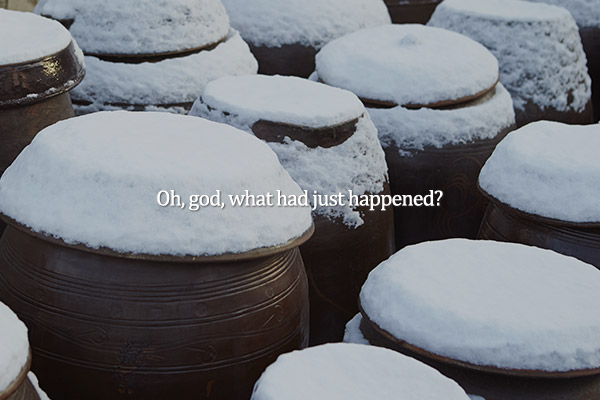 Min-hong got up early in the morning to pee, but couldn’t find the chamber pot. So, he had to put on his father’s oversized shoes to walk past the kitchen and cross the front yard to reach the outhouse.

I pulled up my pants as I walked past the big kimchi pots buried in the ground. That was when one of my feet stepped on something bulky under the snow-covered straw mat.

That long object propped up against the wall, completely covered in snow with its foot tucked underneath the straw mat, appeared to look up before plopping down to its side.

The thing that revealed itself from under the snow was a big claw hammer used at construction sites. But when that hammer fell, it fell on a small pot that was not buried in the ground but was just left outside. The lid was broken in two and a big crack appeared in the body.

Oh, god, what had just happened?

He was living the life of a typical boy, following the rules and living within the set boundaries. He didn’t do anything that was forbidden or didn’t cross any lines. But then one winter day his peaceful life was shattered when he accidentally broke that pot. It must have been a huge psychological shock to him. He thought that his life was ruined forever, that he could not be saved no matter what. So, this part describing the boy’s radical departure from his former self represents his hopelessness and abandonment of his old life.

I crammed my butt into the tight pot smeared with yellow, dried soybean paste stains and undid my belt as I precariously stood on some bricks and broken earthenware pieces.

I pushed so hard that my ears grew red and I burst into coughing. When the coughing stopped, I realized that my lips started quivering like a child about to cry.

Why did I suddenly feel like crying when I was pooping into a stinking broken pot?

: Debuted by winning the Kyunghyang SHinmun Literary Contest with “Catching Mice” in 1991