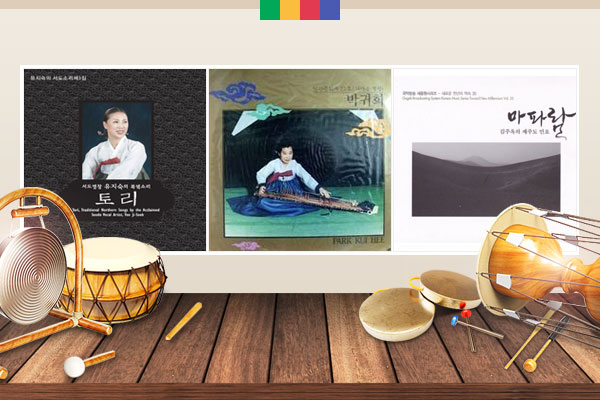 The original name of the yellow corvina was “Jongeo종어” which means the ultimate fish. It must have been named as such to indicate its fine taste, as well as the joy brought to fisherman after a big catch of the fish. The yellow corvina spend winter in the warm southern sea and swim up north in time for spring. They appear in water off Yeonggwang(영광), in the southwestern part of the peninsula, around when azaleas bloom. The sea would be teeming with the fish, so much so, that people in the seaside villages weren’t able to sleep due to the fish’s mating cries. By May the fish would arrive near Yeonpyeongdo Island to lay eggs. But all this was in the past, as the number of the yellow corvina has plummeted in recent decades. In the past, fishermen, along the west coast of Korea, seemed to have been united under the theme of yellow corvina fishing. The first piece for today’s Sounds of Korea is Sulbisori(술비소리), a folksong from the western region. The term sulbi means an anchor cable and sulbisori a song sung while making the anchor cable and wishing for a big haul. Today’s “Sulbitaryeong” is sung by Yoo Ji-sook.

Anchovies are also a springtime fish species. They often fall prey to larger fish, which is why there are a greater number of these fish and consequently better chances of survival. Anchovies spawn as soon as spring begins and the eggs hatch just after a day or two. You would be surprised to hear that a single anchovy can lay up to 5,000 eggs at a time. So, if a fisherman can find a route that a school of anchovies frequent, it would be easy to return home with a full boat of fish.

Moreover, anchovies are available all year around, except for winter. The song coming up next is about catching anchovies sung by master singers Park Kui-hui(박귀희) and Ahn Sook-sun(안숙선.) This boat song, from the southern region, was rearranged into a gayageum accompaniment. It portrays the fishermen’s excitement at catching a net full of anchovies. Here are Park Kui-hui and Ahn Sook-sun singing “Anchovy Fishing Song.”

Living off the sea means that the sea determines your life and death. Fishermen don’t know how the sea will change from one minute to the next. On the other hand, the sea never disappoints and gives back ample rewards if fishermen work hard. So, all the anglers can do is their best under the given circumstances. Jeju Island is said to have three things in abundance – wind, rocks, and women. On the island, there were more women than men, as most lost their lives out in the sea while fishing. As a result, women took up most of the responsibilities assumed by men, from working the fields to diving for seafood. Jeju women may have suffered physically, but they were fearless and proud of the fact that they took care of their families. The famous women divers of Jeju sail out to the deep sea before going underwater to gather abalone and other marine delicacies.

In the past, female divers had to row themselves out to the sea and there was a certain song that kept them company during this laborious work. The rhythmic, cheery “Women Divers’ Song” must be familiar to many Koreans. If the sea is rough and waves are high, they would only sing the chorus part without the melody, but if the sea is calm, they would sing the lyrical parts as well, which included descriptions of their lives and feelings. Most of the lyrics were positive and uplifting. However, some parts hinted at the disappointment they inevitably felt. There is even a passage that goes, “The money I saved is spent on my husband’s liquor.” Today’s Sounds of Korea concludes with Kim Ju-ok singing “Women Divers’ Song.”