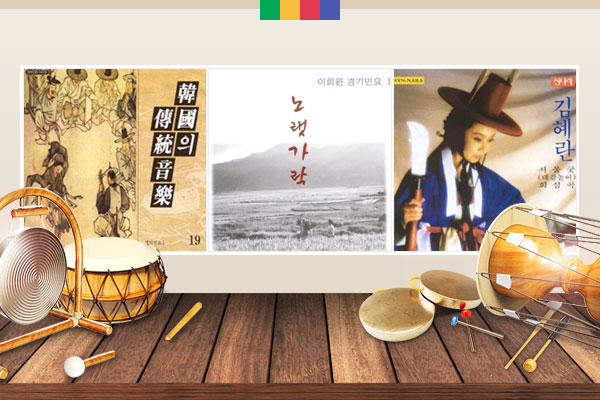 Shamanism elicits negative perceptions among most people. During the Confucian Joseon-era, it was considered a poisonous ideology that deceived and confused people. When western civilization and Christianity made it into Korea, shamanism began to symbolize superstition and primitiveness. Subsequently, the gut굿, the most important ritual in Korean shamanism, vanished for the most part. Fortunately, a few gut rituals have been preserved after they were designated as the nation’s important intangible cultural properties. These days, shamanism is categorized as one of the local religions and many regard it as the inspiration for Korean traditional art. It’s a fact that a large part of Korean traditional music was influenced by shamanistic music. Today we are going to listen to some gut music from Seoul and the Gyeonggi-do region. The first one on the list is “Changbutaryeong창부타령,” a song sung by changbus창부, or male clowns, during shamanistic rituals performed in Seoul or Gyeonggi-do Province. Typically, shaman priestesses perform gut services while men are in charge of the music. These male musicians are called changbu. “Changbugeori창부거리” is a process that serves the god of Changbu, or the god of these male musicians or clowns. The Changbu god is known to ward off misfortunes year-round and protect the shaman priestesses. Professional singers took this melody and changed the lyrics to express the futility of life, excitement of love and disappointment of a breakup, turning the song into a folksong loved far and wide. Here’s Ji Yeon-hwa singing “Changbutaryeong.”

The original lyrics of “Changbugeori” list clowns from all over the country and shaman priestesses casting spells and warding off disasters all through the year. In the folksong version, the lyrics become more down-to-earth about different emotions one experiences throughout life. That is why people nod in agreement or exclaim in awe when they listen carefully to the words. That is what you should do with the next song. This song, also from the Gyeonggi shamanistic ritual, was performed when worshipping a high-level god. The beat may be a little different, but the tune progresses similarly to “Changbutaryeong.” It is assumed that at the end of the Joseon Dynasty, shaman priestesses modified “Changbutaryeong” into a classier version for shamanistic rituals held in the royal palaces. Its lyrics say, “The court is filled with loyal vassals and each household has devoted sons and daughters. Siblings are harmonious and families are happy. Friends are faithful and people will enjoy generations of peace and prosperity with holy monarchs.” Let’s listen to Lee Hee-wan singing Gyeonggi-do folksong “Popular Song.”

Next up is “Daegamnori대감놀이,” a service for the daegam gods. Generally, the word “daegam” refers to a high-ranking official of the Joseon era. But some people claim that the word “gam” in “daegam” came from an ancient word “geom검” which means a god. So in this case, “daegam” actually means a large or a high-level god. Several daegam gods are mentioned in “Daegamnori,” including Teojudaegam터주대감, that protects one’s home and Dodangdaegam도당대감 that safeguards a village. These daegam gods are so generous and easily moved that when villagers offer them plenty of food and entertainment during the rituals, they bless the mortals with large amounts of good fortune and riches. Professional singers presented these musical productions to please the daegam gods, which eventually became a branch of traditional performing arts. This week’s Sounds of Korea will conclude with Kim Hye-ran singing the cheerful “Daegamgeori.”