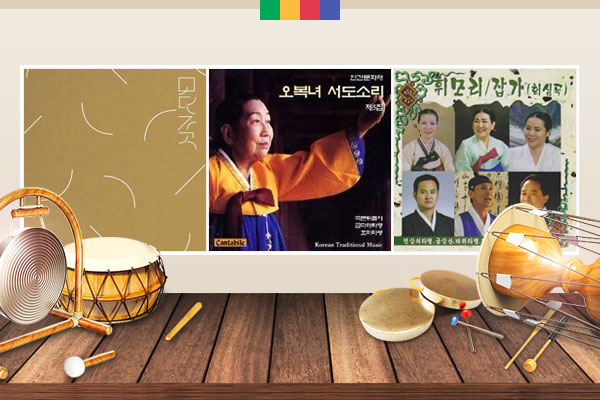 Unlike traditional folksongs that were largely expressive, jeongga정가, enjoyed by the ruling class and Confucian scholars, was rather subdued and elegant. Jeongga, usually melodies set to poems, was classified into three types depending on the length of the poem – gagok가곡, sijo시조, and gasa가사. The words to these jeongga pieces were mostly in Chinese characters or in ancient languages, making it difficult for modern Koreans to understand. Today’s musicians reorganized them into various renditions so that we can enjoy them more easily. The first piece we’re going to listen today was inspired by a gasa piece titled “Chunmyeongok” which means “Spring Nap Song.” The song’s lyrics describes a gentleman’s lighthearted episode one spring afternoon. A gentleman wakes up from an afternoon nap and spots flowers in full bloom in a quiet garden and butterflies fluttering among them. He is so captivated by the lovely sight that he enjoys a bottle of wine before dressing up to find himself a beautiful woman. A gugak trio named Modern Gagok composed “Coffee in the Afternoon,” inspired by “Spring Nap Song.” It’s about a modern gentleman enjoying a cup of coffee in the afternoon like the man who enjoyed wine one spring afternoon many centuries ago.

Music 1: Coffee in the Afternoon/ Sung by Modern Gagok

Koreans like to go to the saunas or hot springs when they feel tired or when their muscles ache. In the past, people in Hwanghae-do황해도 and Pyongan-do평안도 Provinces allegedly sang songs to stay in the steaming hot springs for a little bit longer. They would count from one to one hundred set to a melody. The lyrics would usually be a whimsical description of life that went something like, “I’m twenty and my hot, boiling blood kills all diseases. I’m now thirty, but I’m lonely as ever.” Here are some more passages from the song.

Now that I’m sixty, I’ve lived my life to the fullest. I have no other recourse than to ask the longevity god for additional life.

When I’m seventy, my old body travels into the world without greed. It is rare for human being to be seventy.

I’m now eighty. When am I going to raise my grandchildren and see prosperity? I’d rather raise a pine tree and build a gazebo.

It would go all the way to ninety like this and when they reach one hundred, they would call out for a bucket of cold water to cool themselves down. Bathers singing that tune made it easier to pass the time in the hot tub. Here’s Oh Bok-nyeo singing “Gwanhamsegi” from the western region.

Next up is a song about eating rice. It’s very rare to bite on a stone when eating rice, but in the past small stones or rice husks were often mixed in with cooked rice as grains were mostly milled at home. “Bawitaryeong바위타령” which means “Rock Song” starts off with the following words.

There are so many husks and stones in the cooked rice.

The reason there are so many husks and stones is because my love is not here.

Isn’t it strange to blame something seemingly unrelated for the impurities in the cooked rice? Then the song goes on to list the kinds of stones in the rice. It starts with Beggar Rock in Saemunan새문안, Dunggeul Bawi둥글바위, Neoreok Bawi너럭바위, and many other famous rocks and boulders around the country. When the singer opened the rice pot to eat some scorched rice, a pair of mythical lions carved out of granite climbed out of the pot. The comical song must have made the one who cooked the rice a little less embarrassed. Let’s conclude this week’s Sounds of Korea with Park Sang-ok’s version of “Bawitaryeong.”