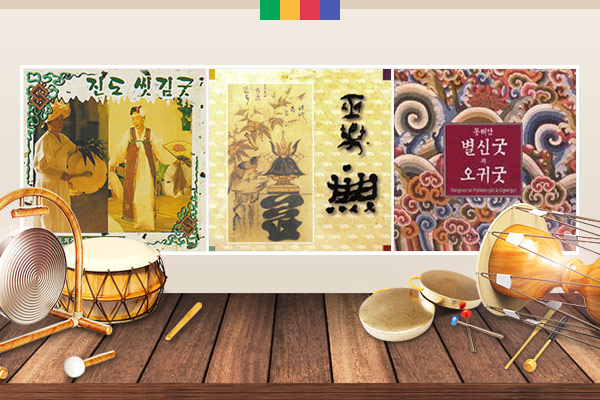 Korean shaman rituals called “gut굿” were one of the most popular form of entertainment in the old days. Musicians and shamans played music and sang and danced during the traditional exorcism or memorial services, satisfying ordinary people’s needs for entertainment. Until not long ago, people looked down on gut and discounted it as a mere superstition, but more recently people started to take interest in authentic Korean culture like gut. In fact, shaman dances and songs are believed to have deeply affected Korean folk music. Today we will listen to gut music inscribed as national intangible cultural assets or UNESCO Intangible Cultural Heritages. The first piece is from Jindo Ssitgimgut씻김굿, which means a purification or cleansing rite. This rite is performed during a memorial service to wash away a dead person’s grudges and sins so that the deceased can cross over to the other side with a purified soul. This rite begins with the shaman explaining to the household gods the reason for purification rite and wishing for peace of mind for the bereaved family. This piece will be performed by the renowned practitioner of Jindo Ssitgimgut, master singer Kim Dae-rye.

Next up is Chilmeoridanggut칠머리당굿 of Jeju Island. This rite was registered as a UNESCO Intangible Cultural Heritage in 2009. In Jeju Island there is a shrine called ‘bonhyangdang본향당’ in every village for its guardian gods. The bonhyangdang of the Geonip-dong건입동 area in Jeju is named Chilmeoridang, the namesake of the rite. This ceremony is performed in every lunar February to send off Yeongdeung영등신, the god of wind. Too much or too little wind was always a big concern for fishermen or women divers of Jeju Island. The chilmeoridanggut was held annually for the wind god so that just the right amount of wind would be blown that year. Jeju shaman rites feature many versions of a song called ‘bonpuri본풀이,’ which describes how a god came to be a guardian for a certain household and what that god went through. The bonpuri song we’re going to listen to now is a sort of Genesis mythology. Jeju’s “Cheonjiwang Bonpuri” tells the story of the universe’s beginning and how the god of the sky and earth came down to the human world and met a woman to have twin boys, who later became the gods of afterlife and this life. Here’s “Cheonjiwang Bonpuri” from the Jeju Chilmeoridang rite with shaman Kim Yun-su singing the song.

Next up is East Coast Byeolsingut별신굿, a shaman rite that took place once every two or three years in villages located along the east coast, from Goseong in Gangwon-do Province to Busan. The village shrine Jeju people called ‘bonhyangdang’ was called ‘golmaegidang골매기당’ in this area, giving the ceremony the name “golmaegidanggut골매기당굿.” This rite, which includes various games and performances, is more like a village festival than a memorial service. Also, musicians largely played percussion instruments like drums, gongs, and janggu to accompany a shaman priest’s rite, giving it a merrier vibe. Today’s last piece is “Simcheonggut심청굿,” the story of Simcheong sung with the region’s typical intonation. Simcheong offered to sacrifice herself to the sea god in return for a large amount of rice for her blind father. She jumped into the sea, calming the roaring waves. The song consoles the spirit of the brave Simcheong and prays that no more people suffer from loss of sight. Master singer Kim Young-sook sings “Simcheonggut” with her high, exquisite voice.